Voices On The Economy (VOTE) 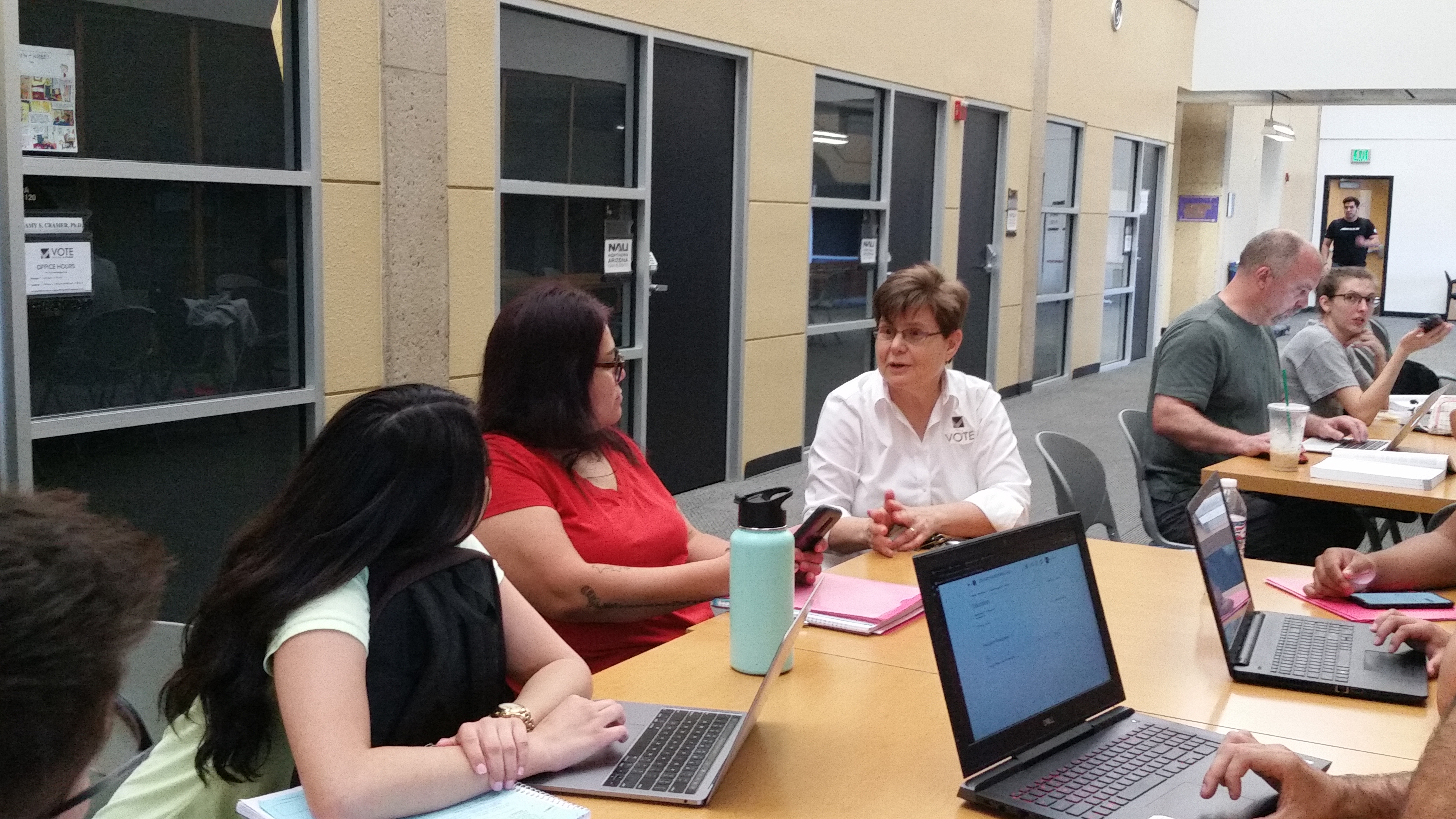 Amy Cramer incubated the VOTE Program at Pima Community College, where she is an economics educator. The program is taught in middle schools, high schools and institutions of higher learning around the country and around the world.
Courtesy of Voices On The Economy (VOTE)

Most of the fights we have in society boil down to economics. That’s according to Amy S. Cramer, PhD., founder and president of Voices On The Economy—or “VOTE” for short.

The economics education program was incubated at Pima Community College, where Cramer teaches. For decades, Cramer was frustrated by the fact that the vast majority of economics courses taught in high schools and higher education only present one point of view—usually the conservative or liberal, and more rarely the radical. So she created the VOTE Program. It lines up all three economic perspectives side by side, in an unbiased way. Participants compare their ideas for solving our most pressing economic problems, including spiraling federal debt, poverty among elders, lack of affordable health care, pollution, and more.

Cramer says, “Our mission is to inspire new solutions to our nation’s urgent economic problems by building a culture of respectful listening, passionate advocacy, and intelligent debate.”

VOTE offers trainings to hundreds of educators every year. The program is taught in middle school, high school, community college, and university classes across the country. It branched out to a international audience last year when the first volume of the VOTE textbook was published as a free, online educational resource. 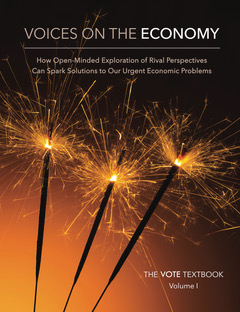 The VOTE Textbook is a free, online resources. In the first 10 months it was downloaded by more than 10,000 readers across the globe.
Courtesy of Voices On The Economy (VOTE)

Cramer says the VOTE Program has no hidden agenda to convince people that one perspective is better than another. She hopes her pluralistic approach to thinking about economics will give people the information they need to understand the different options for solving our urgent economic problems and help them draw their own conclusions about the best way forward for the country. She says it’s a problem that many people don’t feel qualified to engage in conversations about economic policy, even though those policies have a direct impact on their well-being.

“I have the honor and privilege of teaching students from all walks of life,” says Cramer. “The people I get into my class often say, ‘I have no idea what I think. This is what my parents think, so I guess this is what I think.’ Or people say, ‘I am not going to participate at all. I have nothing to say.’ Or I have students who come in and who are leading the Occupy Tucson movement and have been arrested eleven times. Or I have students who come in and say, ‘It’s the free market that’s going to fix it.’ ” 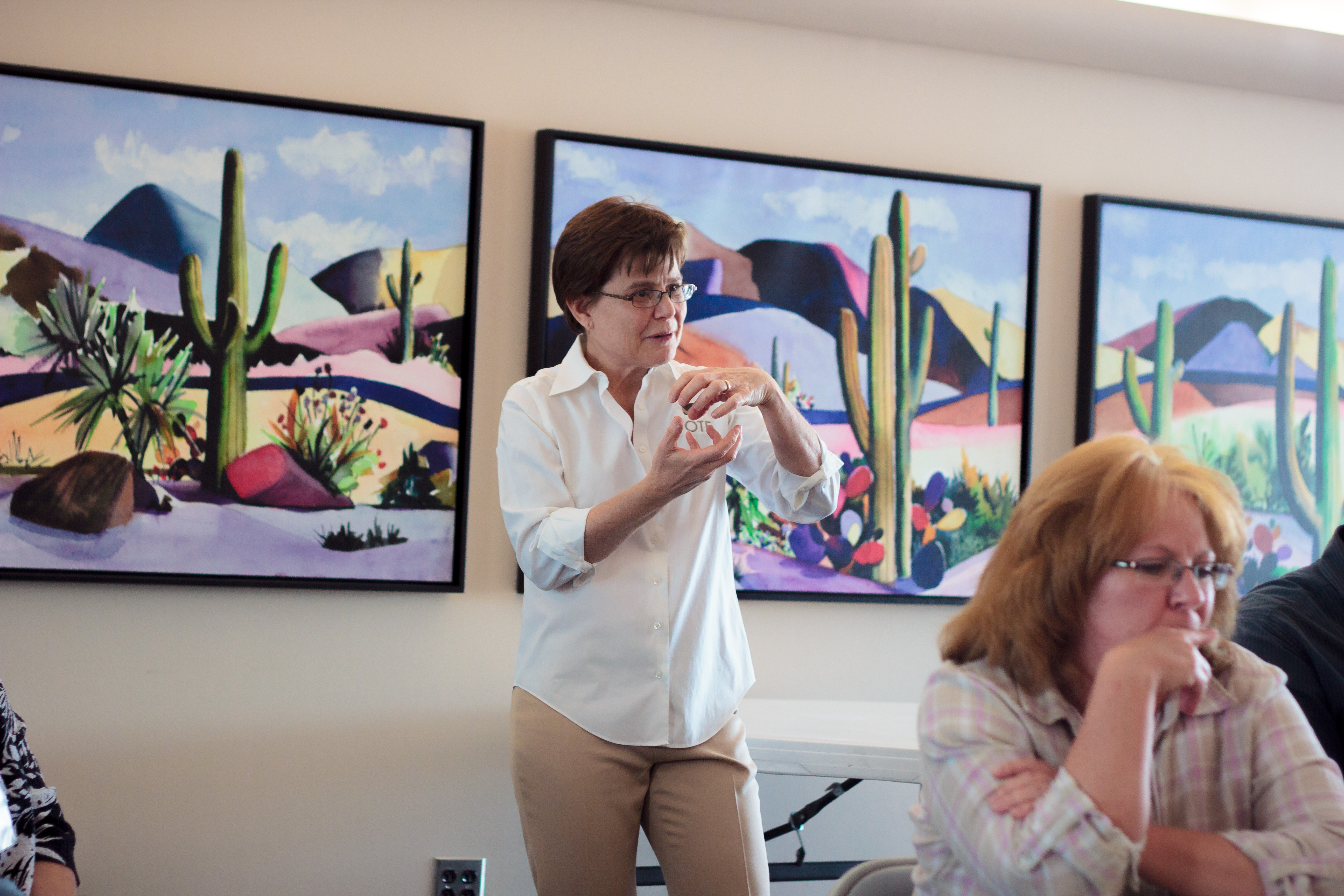 The VOTE Program takes a pluralistic approach to economics education, presenting the liberal, conservative, and radical perspectives side by side, in an unbiased way. Participants can make up their own minds about what they believe are the best solutions to our urgent economic problems.
Courtesy of Voices On The Economy (VOTE)

The one thing we can all agree on is that we vehemently disagree about which policies will create jobs, which will bring us affordable housing, which will ensure that we have a secure food system and a stable economy.

“It’s impossible to be curious when you feel threatened, when you feel like the other party is trying to take away your health care, trying to make it so you can’t breathe the air, trying to keep a roof from being over your head, trying to keep you from being able to feed your children,” she says. “There’s no way that human beings can respond to that kind of threat with curiosity. That’s just not going to happen. What’s going to happen is you’re going to consider the ‘other’ as your enemy in that context.”

Cramer says when participants in the VOTE Program start to listen to what people with different economic perspectives have to say, they realize that everyone wants the same things. They all want to create material well-being.

The VOTE Program uses role plays, posters, and other activities to get participants to try on the words of the different perspectives. They have to say aloud ideas they disagree with, and they have to do it without sarcasm and with conviction.

“They get assigned to represent different perspectives and they wonder at the beginning, ‘How am I possibly going to do this?’ ” says Cramer. 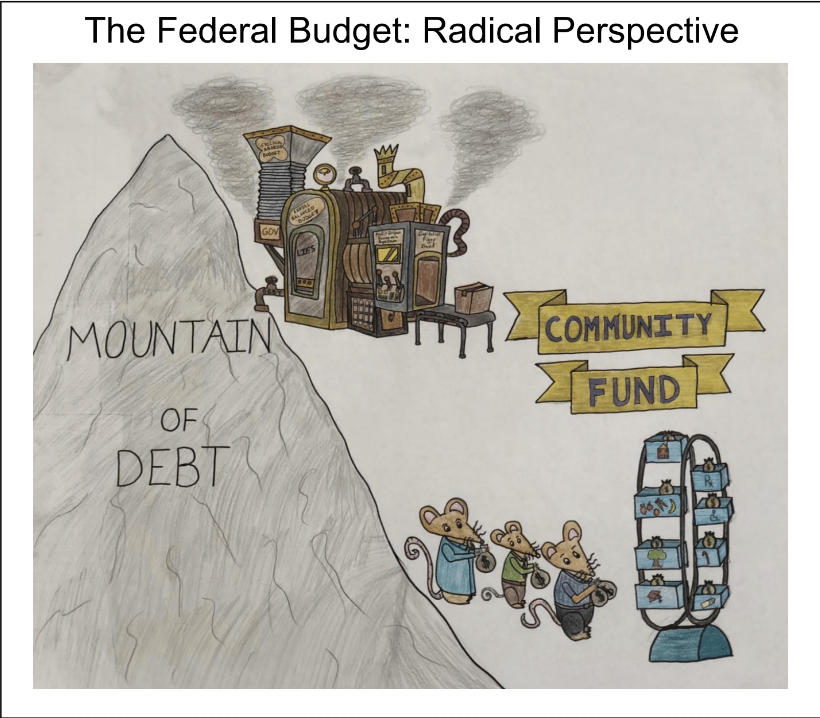 The “special sauce” of the VOTE Program is when participants are asked to try on the different voices of the liberal, conservative and radical perspectives through role plays, poster sessions, and other activities.
Courtesy of Voices On The Economy (VOTE) 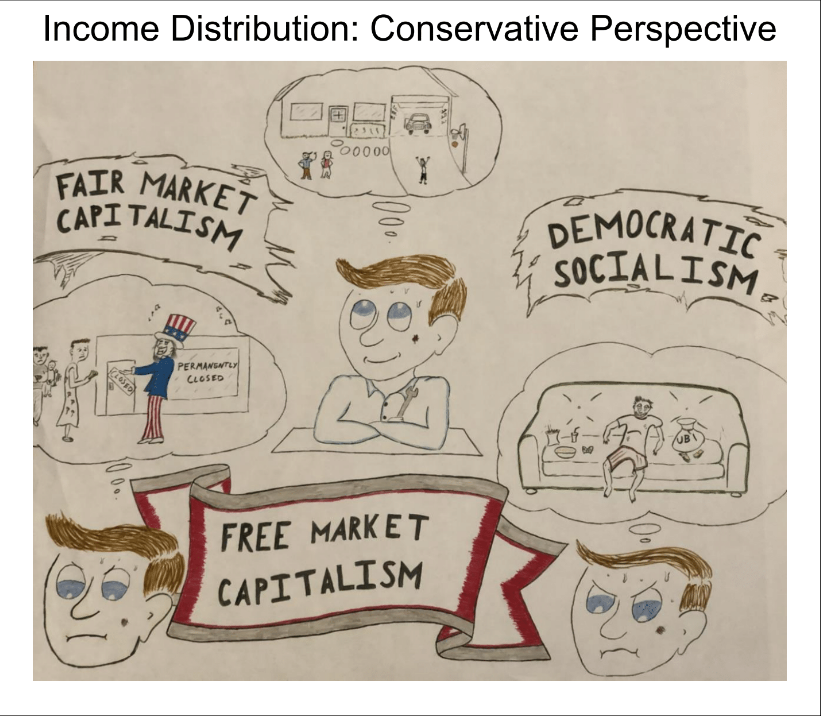 Students are assigned different perspectives for different issues. Amy Cramer says it can be challenging to advocate for positions they don’t agree with, but it’s what “opens the door.”
Courtesy of Voices On The Economy (VOTE) 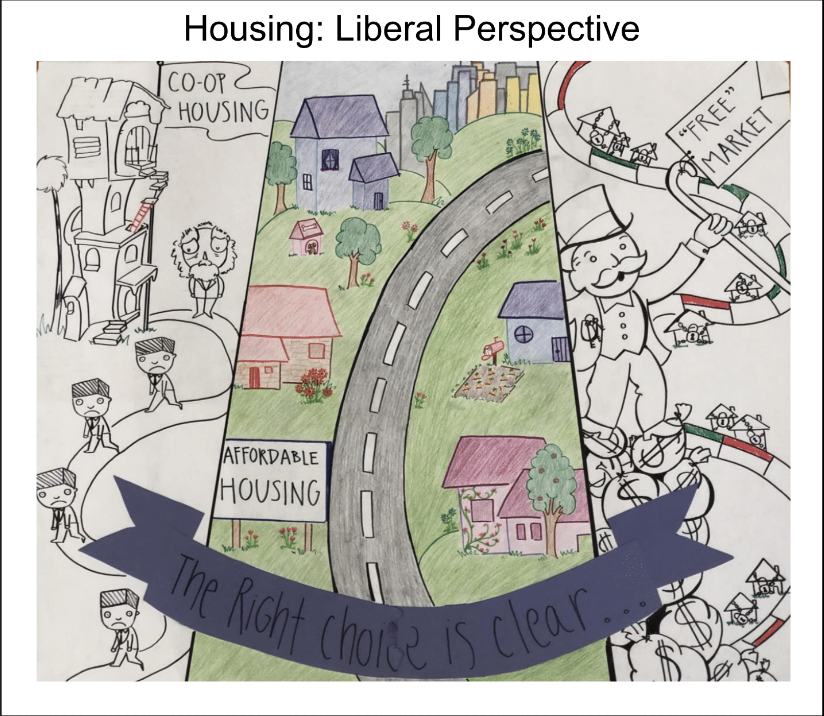 Cramer doesn’t expect them to reach agreement. Instead, she hopes they will realize the value in being open to diverse ways of thinking.
Courtesy of Voices On The Economy (VOTE)

This is similar to a technique used in couples therapy. When partners mirror back what the other is saying, they start to feel more curiosity and empathy. Cramer says the same thing happens in the VOTE Program when participants try on the voices of the three perspectives.

“That’s the open door,” she says. “That’s the place where we all say, ‘Whoa! you’re not my enemy.’ Every perspective actually wants to solve the problems. They just have very different ways of getting there.”

On the last day of semester, Cramer asks participants if they changed their perspectives on at least one of the thirteen issues covered in the VOTE Program. She says in every class, well over 90 percent raise their hands.

Rebecca Lee took the class online during the summer, as the presidential election was heating up. She was already sure who she was going to vote for, but she says the VOTE Program changed her feelings about people voting for the other party.

“I think I’m less judgmental because I feel more curious about how their point of view came about and why they believe what they believe.”

Cramer says this is her hope for the VOTE Program. “Instead of becoming more entrenched, instead of slipping more deeply into silos, we need to be curious about how each of those perspectives is going about solving those problems.” 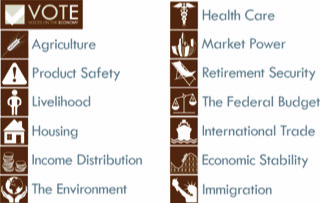 The VOTE Program analyzes thirteen urgent economic issues from the conservative, liberal, and radical perspectives—without any bias toward a certain point of view.
Courtesy of Voices On The Economy (VOTE)

At the end of the day, the goal of the VOTE Program is not to get everyone to see it the same way.

“We won’t unite in agreement,” she says. “That’s a reality of our human condition.”

But that’s not a problem. In fact, she sees it as an asset.

Cramer believes the only way we’ll come up with new solutions to our urgent economic problems is by being open to diverse ways of thinking about issues.

When we listen to competing perspectives with an open mind, “that combative debate that we live with becomes solution-focused conversation, and we set the foundation for innovative thinking to emerge.”

To do that, we first need to listen and understand what the other economic perspectives are bringing to the table.

“Let’s be respectful in our listening,” she says. “Let’s be passionate in our advocacy, and intelligent in our debate. If we do that, we launch into new ways of thinking.”

Amy Cramer hopes the VOTE Program will inspire the next great economic thinkers. She says we’re due for a new way to think about building prosperity for the 21st century. Her vision of the VOTE Program is that when we’re free from material worry we’ll each be able to contribute our unique gifts, and society will reach its highest potential.

This story was produced by Laura Markowitz with Heewon Park. Park is a junior at Swarthmore College majoring in political science and minoring in peace and conflict studies and statistics. Laura Markowitz is a contributing producer for AZPM and a co-author of the VOTE textbook.

The value of debates in the 2020 election COVID-19 may distance voters from partisan behavior Using Economics to Cool the Climate Crisis
By posting comments, you agree to our
AZPM encourages comments, but comments that contain profanity, unrelated information, threats, libel, defamatory statements, obscenities, pornography or that violate the law are not allowed. Comments that promote commercial products or services are not allowed. Comments in violation of this policy will be removed. Continued posting of comments that violate this policy will result in the commenter being banned from the site.