Council wrestles with yearly deficits, short-term fixes; they this week approved a $1.26B budget after making more than $30M in cuts. by Andrea Kelly TWEET SHARE
(VIDEO: AZPM)

The Tucson City Council this week approved a $1.26 billion budget after making more than $30 million in cuts to match projected revenues, and this is far from the first time the council has faced tough spending decisions.

In fact, the struggle to draft a spending plan that matches estimated revenue collections leads to annual pleas from city employees not to cut salaries, or from city residents asking the council not to cut services and programs.

The members of the City Council have wrestled with the numbers in the context of a recession in recent years, but former mayor Tom Volgy said it's been a recurring issue for decades.

Even though city revenue was increasinjg at times in the last decade, the recession meant they were rising slower than pre-recession estimates predicted.

The budget for the fiscal year that begins July 1 is lower than last year. Revenue comes from three main sources: the general fund is local and taxes, mostly the city sales tax.

Enterprise funds are departments that are supposed to pay for themselves. The Tucson Water department, for example, raises rates when it needs to bring in more revenue to cover maintenance and water delivery expenses.

The third source of funding is restricted funds. Those are resources that must be used on a specific expense. One example is a federal housing grant. That money cannot be moved to the transportation department to fill potholes.

Causes:
Primarily, he said, the frequent Tucson budget deficits are due to structural budget problems. 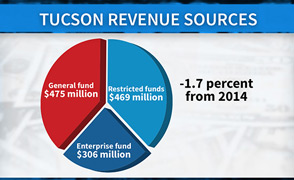 They begin with a pattern of "enormous growth" for much of the second half of the 20th century, he said.

Then, Tucson has a high amount of what Volgy called "working poverty," or people who work, but do not earn enough money to contributing much to the tax base.

The third issue, he said, is the source of the revenue the city does have: sales taxes, which are unpredictable.

Solutions:
It is possible to avoid annual Tucson budget deficits, but it requires changes Volgy said are politically difficult.

One solution would be to consolidate the county and the city governments into one, he said. An effort to do so failed more than two decades ago.

Establishing a dedicated revenue source for public safety departments and the transit system would be a start to stabilizing the budget, said the city's Chief Financial Manager Kelly Gottschalk. 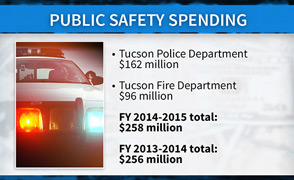 To save money, the city also needs to reform how it pays retirees, she said. The rising cost of paying previous employees has been blamed for many years as a cause for Tucson budget deficits.

The education systems in the region need to improve to better train workers, said Gottschalk, who is also an assistant city manager.

What's next:
When Tucson City Council members voted on the budget for fiscal year 2015 Tuesday, they said they will continue to look for budget savings throughout the fiscal year, which runs from July 2014 to June 2015.

That's not only smart budgeting, Gottschalk said, but "absolutely necessary because many of the programs take a long time to implement."

"We have to start looking at the services we provide on a continual basis to see can we do those more effectively or efficiently in a different way, whether that's combining departments or outsourcing things, so it's an ongoing process that we do all the time," she said.

Volgy said he is not a fan of outsourcing city jobs to save money because it reduces wages for employees.

Relocation raises Tucson's profile in fashion industry State unemployment fund in danger of running out News roundup: President Trump visits Tucson, city asks UA to test all students, high fashion coming to Tucson
By posting comments, you agree to our
AZPM encourages comments, but comments that contain profanity, unrelated information, threats, libel, defamatory statements, obscenities, pornography or that violate the law are not allowed. Comments that promote commercial products or services are not allowed. Comments in violation of this policy will be removed. Continued posting of comments that violate this policy will result in the commenter being banned from the site.