The Pima County Board of Supervisors is considering a 12 percent property tax rate increase that will bring in less revenue than last year's tax levy. 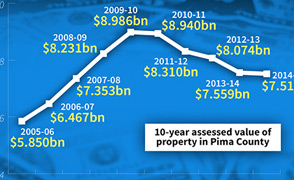 Pima County Supervisor Sharon Bronson said the revenue the property tax will bring in is 10 percent less per Pima County resident, when adjusted for inflation, than the taxes paid in the 2009-10 fiscal year.

The tax increase will prevent the county from making budget cuts, said Pima County Administrator Chuck Huckelberry. The county spent its savings, or reserve funds, during the recession, and in order to keep up the services offered last year, Huckelberry is recommending the Board of Supervisors approve a tax rate increase.

"We’re at the point where we’ve exhausted now our reserves and we either have to drastically cut services or increase rates. I’ve recommended to the board that we increase the rates," Huckelberry said. "Even though those rates will go up, in the aggregate they go up about 61 cents, and that represents about a 12 percent increase in tax rates." 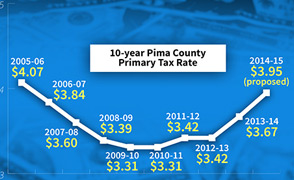 But proponents of lower taxes say that's not the only way to look at the county's options. There is wasteful spending, said John Kromko, an advocate for lower local taxes.

“Our taxes are way higher in Pima County than they are in other counties. And it’s because of careless spending. Spending that is unnecessary," he said.

Specific Spending Criticized
One example he cited is the $15 million allocation from the county budget to the University of Arizona Medical Center South Campus. The county should let the hospital make ends meet on its own, and not pay for it.

"That’s just flat out wrong, there’s no way you can justify it,” he said. 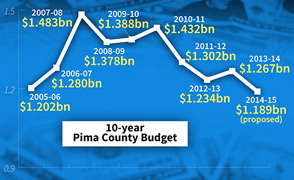 If the county chooses not to pay for the UAMC South Campus, it could close, Huckelberry said.

Giving the hospital the $15 million contracted to help pay for operations is a savings for the county, Bronson said.

Before the UAMC was running the hospital, the county spent $40 million on it, she said.

Kromko said no other county spends money on a hospital it does not operate, but Bronson said that's because Maricopa County has a special taxing district to pay for a hospital. Therefore, taxpayers are still paying for health care in the most populous county in the state.

Without the increase, Huckelberry said, the biggest cut would come to law enforcement.

"(Pima County Sheriff Clarence Dupnik) talks about decreasing service, cutting patrol officers, cutting law enforcement, taking deputies out of school. Doing things that I don’t think are really acceptable. Those are the kind of cuts that he’d have to make if in fact we weren’t going to raise taxes and just live with what we have today,” Huckelberry said.

Economic Development Emphasis
"Other counties have at least two forms of sales tax, we have none," Bronson said. "So that says something about why property taxes are higher than in Maricopa County."

The only Pima County-wide sales tax is a half a percent that goes to the Regional Transportation Authority. It funds transportation improvements in all areas of the county, including cities, towns and the Native American reservations. It does not go into the county budget.

"One of the things the county can do when it comes to economic development is fund infrastructure," she said.

Doing things like improving the roads will contribute to attracting businesses with higher-paying jobs, she said.

"Chamber companies with multiple locations have expressed their concern over a six-figure increase in property taxes in Pima County," the chamber wrote in a letter to the supervisors. "Such a tax increase may impact their ability to expand and to hire new positions in Pima County as they consider the financial burden compared to other counties in the state."

In the letter, the chamber said the economy has not recovered enough for an increase.

"Our community has begun to recover from the economic downturn, but it’s been very slow. We are not ready to 'right' the budget shortfalls that the County has experienced over the last several years," the letter said.

Bronson disagreed and said cuts to funding would be worse.

"I think the businesses will hurt more if we don't do pavement preservation, if we actually have to start cutting services like justice and law enforcement, sheriff's deputies on the street," she said. "I think that has serious economic development consequences and will impede the recovery."

METRO WEEK: $200M Tucson Streetcar Opens For Service METRO WEEK: City Manager Miranda Leaves a Stable Admin Metro Week: 'Zoo Animals' Lives, Deaths Are Educational'
By posting comments, you agree to our
AZPM encourages comments, but comments that contain profanity, unrelated information, threats, libel, defamatory statements, obscenities, pornography or that violate the law are not allowed. Comments that promote commercial products or services are not allowed. Comments in violation of this policy will be removed. Continued posting of comments that violate this policy will result in the commenter being banned from the site.