ACLU Sues US over Alleged Abuse of Immigrant Children

The American Civil Liberties Union Arizona and San Diego chapters have sued the U.S. Department of Homeland Security to force it to produce records related to alleged abuse of children while in custody of the Border Patrol. 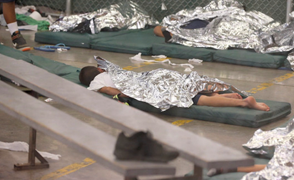 Inside the Nogales shelter in June 2014, children sleep on mattresses on the floor.
AP
The ACLU filed the suit in federal court Wednesday, about two months after filing a public records request with the department asking for the documents.

“Not only does the failure of DHS to produce the requested documents violate the Freedom of Information Act, it also impedes the ACLU’s efforts to educate the public on matters of pressing concern, namely, the mistreatment of children in Border Patrol custody,” a press release from the ACLU said.

Last summer when Border Patrol and U.S. Customs and Border Enforcement apprehended thousands of unaccompanied minors – mostly from Central America – the ACLU filed complaints to DHS on behalf of 116 children.

The children alleged abuse and mistreatment, including harsh temperatures in the detention facility, severe crowding and denial of adequate hygiene supplies, bedding, food, water and medical care, according to the ACLU.

"In response to the unprecedented humanitarian situation last summer, U.S. Customs and Border Protection personnel around the country responded in a professional and compassionate manner," the agency said in an emailed statement.

"Border Patrol Agents provided safety, shelter and care for immigrants in custody from the initial encounter up until they were processed and out of the agency's custody," the statement continued. "In the face of overwhelming numbers of unaccompanied children crossing the border in South Texas, U.S. Border Patrol agents took extraordinary measures to care for these children while in custody and to maintain security in overcrowded facilities."

17-Year-Old Runs Away From Tucson Facility for Migrant Children ACLU Challenges Law Enforcement's Seizure, Sale of Private Property Surge of Minors at Border Expected, But Not Like 2014
By posting comments, you agree to our
AZPM encourages comments, but comments that contain profanity, unrelated information, threats, libel, defamatory statements, obscenities, pornography or that violate the law are not allowed. Comments that promote commercial products or services are not allowed. Comments in violation of this policy will be removed. Continued posting of comments that violate this policy will result in the commenter being banned from the site.