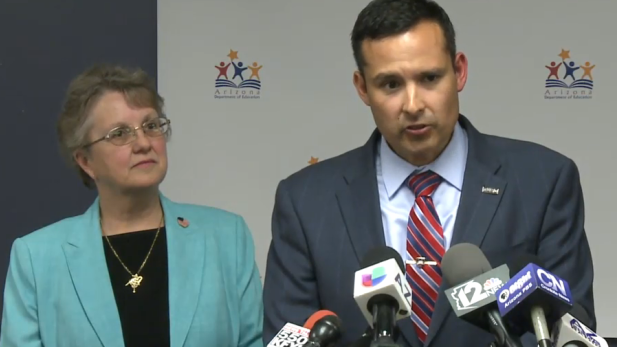 The Tucson Unified School District will not lose state funding for now, but the state will continue monitoring how it is teaching ethnic studies, Arizona Superintendent of Public Instruction Diane Douglas said Tuesday.

Douglas said at a news conference that her department will continue making visits to TUSD classrooms announced and unannounced.

“Given TUSD’s cooperation with the monitoring process and evidence of their attempts to improve compliance with the statute, it is in the best interest of the district’s students to move forward without denying any state aid,” Douglas said in a prepared statement.

Douglas said at the news conference that her department has concluded that "the district-approved curricula do not appear to violate statute," she said. "However the department remains deeply concerned that some TUSD teachers are not following the curricula for the ethnic studies classes, and while TUSD has clearly corrected a few situations, there is still work to be done."

“I appreciate the state superintendent’s willingness to work with our district throughout this process,” Sanchez said. “Together we were able to avoid a costly loss of funding, and I remain committed to improving culturally relevant classroom instruction so that in the future monitoring will no longer be required."

The Arizona Department of Education had given the district until Wednesday to address issues with how some "culturally relevant" courses were being taught.

Douglas had said in recent weeks that she supports the teaching of ethnic diversity in schools. She said TUSD's curriculum complied with state law, but not the way some teachers were delivering it in classrooms.

Sanchez said last week he and the district had done everything the state required days ahead of the deadline.

"We spent time tweaking some of the instructional delivery and had conversations on how to really tighten it up to align with the district curriculum," Sanchez said last week. "There were some places where it wasn't too tightly aligned. We've gone to the level of collaboration that we needed to, so I'm hopeful."

On his last day in office in January, former state superintendent John Huppenthal sent TUSD a six-page letter saying some of its "culturally relevant" curriculum was in violation of state law. The same law was used to shut down the district’s Mexican American studies classes in 2012.

Huppenthal said the classes violated a state law that prohibits classes that “promote the overthrow of the United States government,” and “promote resentment toward a race.”

The state did not oppose TUSD’s new curriculum, and some high schools have been offering the new courses as electives this academic year.

Ethnic Studies Monitoring Puts Stress on TUSD Teacher Sanchez: TUSD Meets Arizona Requirement on Ethnic Studies Analyzing State Scrutiny of TUSD Ethnic Studies
By posting comments, you agree to our
AZPM encourages comments, but comments that contain profanity, unrelated information, threats, libel, defamatory statements, obscenities, pornography or that violate the law are not allowed. Comments that promote commercial products or services are not allowed. Comments in violation of this policy will be removed. Continued posting of comments that violate this policy will result in the commenter being banned from the site.