Pima County's $1.2 billion budget for the next fiscal year could include a tax increase. Blame the state, a top county official said on Friday's Metro Week.

County Administrator Chuck Huckelberry said if the county were not forced to pick up the tab for obligations the state usually pays for, taxpayers in Pima would not be facing an increase in county property taxes.

The budget includes a 2 percent cut to all county departments.

"That tax increase is simply because the state, when they balanced their budget, they balanced it by shifting costs to Pima County," Huckelberry said. “A lot of people don’t understand that a third of their property tax that the county levies is sent to the state to support state programs.”

He said he will ask the Board of Supervisors to sue the state on the premise that some of the costs cannot be shifted to the counties.

Specifically, Huckelberry said, the county would sue regarding the “state aid to education” a cap that property taxes cannot exceed 1 percent of the value of a home.

If taxes are more than that, the state is supposed to pay the overage to the homeowner's school district. The state is now asking the county to pay for it, and in Pima, that figure could amount to between $8 million and $18 million, Huckelberry said.

"That's really a shift in tax burden between the state and the county, and we think that’s unlawful,” he said.

If the county prevailed in a lawsuit, the tax rate for next year would revert back to what it is now, he said.

“If that occurs there won’t be any need for any property tax rate increase in Pima County. We won’t have one," he said.

Pima County is ending this year about $14 million ahead of budget, and Huckelberry has advised the supervisors to put the money into a savings account.

The tax increase is expected to bring in another $23 million to cover $23 million in state shifts, and Huckelberry said the $14 million left over at the end of this fiscal year needs to go into a savings account, not to the budget to lower taxes.

“Everybody needs a contingency fund, a rainy day fund…ours is about as low as it should be," Huckelberry said.

He said the rainy day fund should be about $30 million, which is about 5-6 percent of the county's general fund. The additional $14 million would boost the fund to that level.

Huckelberry said it also helps prepare the county for the unexpected.

"It also helps us offset potential, additional, legislative shifts that may come during the year," he said.

The primary tax rate increase will cost the average county homeowner about $17 a year. The average residential property in the county is valued at $150,000. With additional tax increases on the secondary tax rate for the county library system, the total increase will come to $27 a year if the Board of Supervisors approves the budget as Huckelberry wrote it.

The board can make changes, and it is the final authority in how the county raises and spends its money and operates its departments. 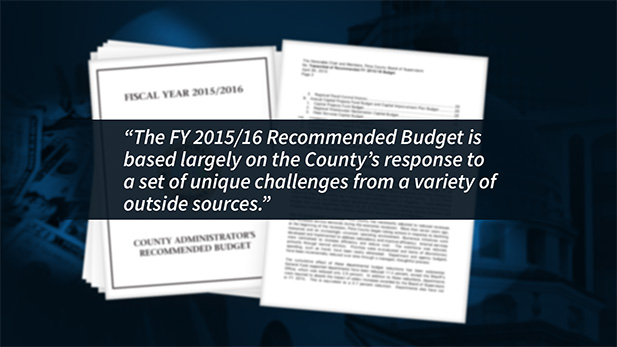 Yea or Nay on Bonds? Efforts Arise to Convince Voters Pima County Sues State Over Costly Budget Provision METRO WEEK: Why Republicans Didn't Challenge for Mayor
By posting comments, you agree to our
AZPM encourages comments, but comments that contain profanity, unrelated information, threats, libel, defamatory statements, obscenities, pornography or that violate the law are not allowed. Comments that promote commercial products or services are not allowed. Comments in violation of this policy will be removed. Continued posting of comments that violate this policy will result in the commenter being banned from the site.