× LET'S ALL GO TO THE LOBBY, our new podcast filled with upbeat conversation and recommendations for great movies from across time and around the world.
/ Modified may 15, 2015 4:26 p.m. 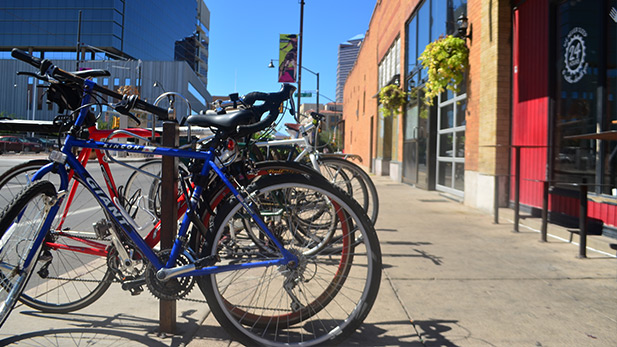 Walk Score, a company that analyzes real estate for non-automobile travel friendliness, ranks Tucson #9 for most bikeable cities in the U.S.

Walk Score's bikeability rankings are based on total miles and interconnectivity of a city's bike lanes, the share of commuters who travel by bike, and the ease of biking based on local terrain.

“If you look at a map of downtown Tucson, you’ll see that there’s just a ton of interconnected bike lanes throughout the city," said Sara Fischer, local market manager for Walk Score's parent company, Redfin. "I think they’ve really listened to the concern and demand, and they’ve stepped up well.”

Tucson has 1,010 miles of bikeyways, the city reports in a 2015 study. Bikeways include bike lanes, shared-use paths and residential bike routes.

Mesa is the only other Arizona city listed in Walk Score's top 20. The report ranked all U.S. cities with a population larger than 300,000.

New Ways to Ride With Tucson's Bike Share Tucson Adding Bike Share to Transit Options Pima County Celebrates Walk and Bike to School Day Friday
By posting comments, you agree to our
AZPM encourages comments, but comments that contain profanity, unrelated information, threats, libel, defamatory statements, obscenities, pornography or that violate the law are not allowed. Comments that promote commercial products or services are not allowed. Comments in violation of this policy will be removed. Continued posting of comments that violate this policy will result in the commenter being banned from the site.