Wildlife illustrator Beth Surdut learns that all lizards are not created equal... by Beth Surdut Tweet 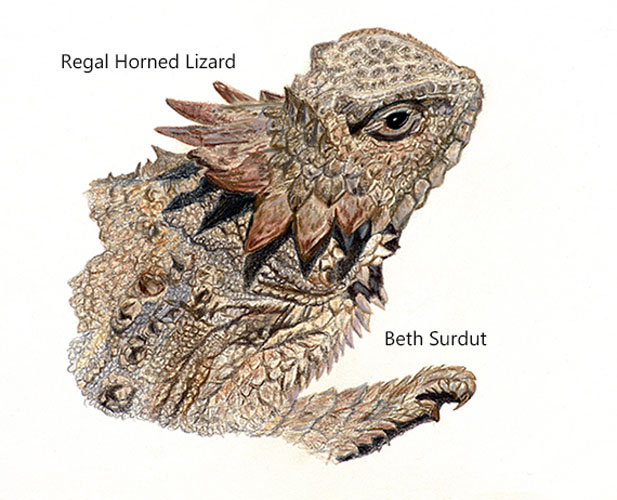 Artist and writer Beth Surdut listens to ravens and paddles with alligators in wild and scenic places. But she also knows that true adventure can be found just outside your window -- and sometimes, it's pretty startling...

The lizard population around my house is so busy, so varied, that it’s difficult to choose just one to talk to you about.

On my way to the trash bin this week, zebra tailed lizards, who like big open spaces so they can keep track of predators, skittered, stopped, lifting their black and white-striped tails high and gently waving them, languidly, like underwater sea anemones, to let me know my presence threatened their delicate existence. Then off they ran in completely different directions.

Chunky Desert Spiny or sleek whiptails tend to scuttle for cover under rocks, into holes they’ve dug into sandy soil, up trees, under anything prickly or shady. There’s one particular spiny lizard who I call The Sentry, because he often watches me from the same spot just underneath the pink oleander hedge, his head turning slightly as he tracks me.

But not the Regal Horned Lizard. The operative word for this spiky, fringed, multi-colored, speckled, phrynosoma (that’s with a "ph") solare is SLOW.

The crown of horns on their heads is so indigestible, it can pierce through a snake from the inside as it tries to swallow the lizard.

And then, there’s the blood. If you look very carefully, you might see just a horned head poking out of a hole in the morning after a cool desert night. The lizard is letting the sun warm the blood in its head and when the blood is warm enough, it circulates through the rest of the body. While that is impressive, there is a defense mechanism right out of a science fiction movie. When threatened, this rather cute little beast can squirt foul tasting blood from its eyes. Not only is the action shocking, but also discouraging to a number of predators like foxes, dogs—the blood just doesn’t taste good.

And here was a Regal Horned Lizard right on my front stoop. Pointed and crenelated, stubby and shy, lizard was so intent on watching a grasshopper that neither one moved when I appeared. Patience, such patience, I thought as I stood next to the lizard, admiring him with my camera. 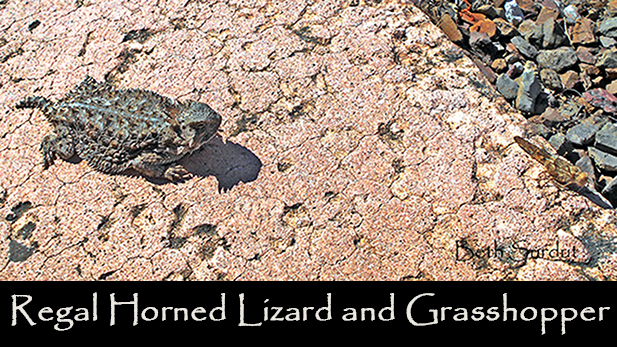 Grasshopper did not move. My camera snapped at them. Lizard glanced at me, then back to Grasshopper. Snap, said my camera. Lizard did not twitch. Grasshopper held his ground. So smart, I thought. Grasshopper knows the speed of a lizard. (Because at that point I didn’t know I was looking at the slowpoke of the lizard world.) Playing it safe, I thought. Oh, the wisdom of the wild.

I shifted my stance and Lizard lost his focus,

Didn’t squirt blood from his eyes, but scuttled into the blue agave whose spines would protect him from me. Grasshopper did not move. Closer inspection allowed. Surely, Grasshopper would leap now. But it is hard to leave when one leg is stuck to the pavement Impossible to leave when you are desiccated, preserved, perfect, but dead.

The Regal Horned Lizard (Tumamoc in the language of Tohono O’odham) and I had patiently stalked a dead grasshopper.

Or had we? I called Research Scientist Matt Goode at the University of Arizona’s Desert Laboratory on Tumamoc Hill. He told me that, although it was possible the lizard was interested in the grasshopper, much more likely, lizard wanted to place his sticky tongue on the ants around grasshopper. Or, thought he was hiding from me, blending in with his fringed perimeter and rock-like coloration.
So even though I thought I was paying attention, in part because of what I’d learned about other lizards, it wasn’t just about looking, it was about looking it up.

I also checked in with the National Phenology Network based on the University of Arizona's main campus. Phenology–that’s "ph" like phrynosoma— refers to studying seasonal behavior in plants and animals, especially in relationship to climate. The Phenology Network coordinates Nature’s Notebook online, where anyone, including you, can sign up to log in their observations about species behavior. Scientists can then tap into our data to use for studies that can help define the future of our environment and these critters I so delight in sharing with you.

Oct 20, from 3 to 4:30 PM, Beth Surdut leads a workshop on The Art of Paying Attention-- Critter Tales: Yours, Mine, and Ours at the Tucson Botanical Gardens during National Phenology Week. This workshop will explore improving observation skills through exercises and storytelling. Surdut adds "Come share your backyard critter and habitat stories —off the cuff is just fine! Do bring a notebook."

Wildlife Managers Moving Large Lizards out of Freeway Project's Path "The Soul of an Octopus" The Art of Paying Attention: Raven Conversations
By posting comments, you agree to our
AZPM encourages comments, but comments that contain profanity, unrelated information, threats, libel, defamatory statements, obscenities, pornography or that violate the law are not allowed. Comments that promote commercial products or services are not allowed. Comments in violation of this policy will be removed. Continued posting of comments that violate this policy will result in the commenter being banned from the site.