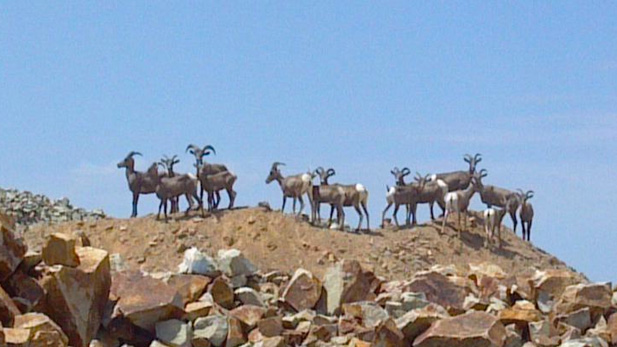 Bighorn sheep in the Silverbell area.

Pneumonia has been confirmed as the cause of death of another bighorn sheep in the herd relocated to the Catalina Mountains north of Tucson, bringing the infection’s death toll to four.

Mark Hart, public information officer with the Arizona Game and Fish Department, said the agency continues to closely monitor the health of the remaining animals.

"But we’re moving ahead with plans for bringing in more bighorn sheep in November," Hart said. "They would likely be from a population previously exposed to pneumonia."

Hart said one such herd is located near the Yuma area.

Game and Fish is conducting a statewide survey of the sheep and Hart said a decision on whether or not to relocate more bighorns to the outskirts of Tucson will come when that is completed.

There are currently 35 sheep known to be alive in the Catalinas that are fitted with GPS collars. Hart said the population is likely between 42 and 44 including lambs that were born in the mountains that do not have GPS collars.

State to Stop Killing Mountain Lions that Prey on Bighorns Bighorn Sheep Population Grows in Santa Catalinas 29 More Desert Bighorn Sheep Released in Santa Catalinas
By posting comments, you agree to our
AZPM encourages comments, but comments that contain profanity, unrelated information, threats, libel, defamatory statements, obscenities, pornography or that violate the law are not allowed. Comments that promote commercial products or services are not allowed. Comments in violation of this policy will be removed. Continued posting of comments that violate this policy will result in the commenter being banned from the site.