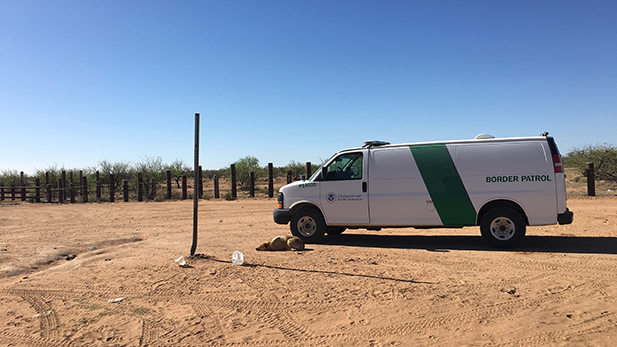 Most of Arizona’s 10 border crossings with Mexico are well-known and traveled by thousands of people on both sides of the border.

But the smallest one, a crossing point that almost nobody uses except for a Southern Arizona Native American tribe, has changed. As a result, a way of life for this tribe may be coming to an end.

VIEW LARGER Panoramic view of the San Miguel Gate.
Michel Marizco, Fronteras Desk
The pavement on the Tohono O’odham land ends about a mile before the Mexico border. Nogales, Ariz., lies to the east, over the jagged peaks of the Baboquivari Mountains.

Unlike every other port of entry in Arizona, there is no town here. One day in mid-March, there was a single Border Patrol agent. It’s one of the loneliest jobs in the agency-- guarding the San Miguel Gate.

The old barbed wire fence that demarcated the boundary for more than a century is gone. It has been replaced with giant steel poles packed in concrete.

It is meant to keep out cars, not people. A pair of scruffy reservation dogs keep the agent company, sprawling comfortably in the shade of his white and green van.

Besides watching the border for people trying to cross illegally, the agent mans the gate. Every now and then, a tribal member will want to cross into Mexico through here. Or, go the other way and cross into Arizona.

It’s an arrangement between Mexico and the U.S. that dates back to the treaty that created the line between the two countries in 1848.

The border divided the O’odham into those in Arizona and those in Mexico. Some 70 years ago, the two countries agreed to let tribal members use the crossing to go back and forth. 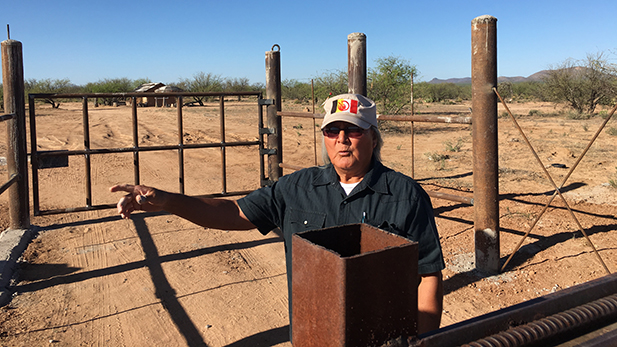 David Garcia in between the U.S. and new Mexico gates at the San Miguel Gate.
Michel Marizco, Fronteras Desk
On this crisp March morning, the arrangement seemed to have come to an end.

"What’s wrong with the picture now is that now you have another gate on the Mexican side which was something that was put here within the last week or week-and-a-half," said David Garcia, a former tribal councilman.

He and other members of the tribe have been trying to learn why someone erected an equally massive steel gate on the Mexican side. One morning when a reporter visited, the gate inside Mexico was closed.

Garcia crouched beneath the United States gate, walked six feet into Mexico and changed that.

With a heavy swing, the well-oiled gate clanged open.

"I feel that this area south of the border is part of my spiritual homeland," Wilson said.

His father grew up on the Mexican side, a slice of desert dotted with giant mesquite trees called pozo verde.

"Who is going to control passage to and from O’odham communities in Sonora?" Wilson asked. 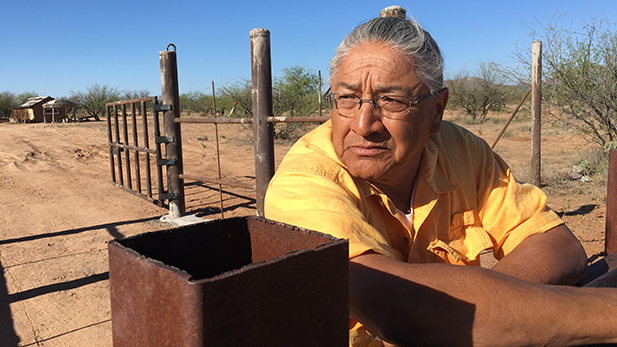 Mike Wilson leans on the U.S. fence. The new gate is behind him.
Michel Marizco, Fronteras Desk
Experts say Mexico doesn’t recognize O’odham sovereignty and the reservation stops at the border. So the lands used by the O’odham in Mexico are not beholden to the same restrictions they are in the U.S.

Earlier this month, someone bought the land on the Mexican side.

Just who is responsible for the gate remains unclear. Wilson and Garcia said they were told that the land on the Mexican side was purchased by a rancher. Indeed, a slab of concrete is etched with the names of members of a local ranching family from the Mexico side.

According to the plaque, it was put in place March 16.

"It is a very complicated legal case. It can take a lot of money and a long time just to get the discovery to find out who owns it, why," said Robert Williams, who specializes in Native American law at the University of Arizona.

"That is probably, at this point, more of a political issue. An international political issue involving a serious question of indigenous peoples' rights."

A Border Patrol spokesperson said the new gate is a private issue between a landowner in Mexico and the tribe.

As for the gate, it remains unguarded. But Wilson pointed out the very prominent padlock. It’s unlocked, so far.

"Who’s going to be here 24/7 to open up this reinforced steel gate?" he asked.

For now, that question remains unanswered.

Tohono O'odham Say No to Border Wall on Their Land Native Americans Still Face Obstacles to Voting Access Arizona Tribes in Solidarity over Stopping North Dakota Pipeline
By posting comments, you agree to our
AZPM encourages comments, but comments that contain profanity, unrelated information, threats, libel, defamatory statements, obscenities, pornography or that violate the law are not allowed. Comments that promote commercial products or services are not allowed. Comments in violation of this policy will be removed. Continued posting of comments that violate this policy will result in the commenter being banned from the site.