Tucson Water will ask the City Council later this year to approve a rate increase to continue to improve aging infrastructure.

Further in the future, the water department has plans to expand the use of recycled water, including what's commonly referred to as "toilet-to-tap" or potable use.

That could happen in the next 10 years, said Tucson Water Director Timothy Thomure, in a Metro Week interview. 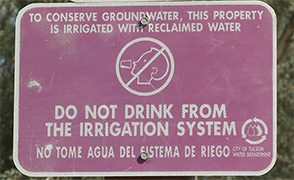 Recycled Water Plans
"We're always looking to increase our use of our recycled water, beginning with expansions of our reclaimed water system," Thomure said.

First, what's the difference between recycled and reclaimed water?

Reclaimed water: non-potable use of recycled water, mostly now used for irrigation at parks, golf courses and other places with a lot of grass.

Recycled water: any type of recycled use, non-potable or potable in the future. Tucson doesn't have an immediate need to use treated wastewater for human consumption yet.

Tucson Water's first step in using more treated wastewater is public outreach, Thomure said. That's a lesson the city learned from past experience when it converted from groundwater to Central Arizona Project water for its main supply.

And Tucson isn't the only community considering toilet-to-tap for a future drinking water source.

As the Colorado River supply declines in drought, and groundwater remains fragile resource for fear of over-pumping, it's one of several remaining options for water, Thomure said.

"Over the next five years you're going to see a number of communities implementing these programs. We're lucky in that we don't need that supply quite yet, and we can learn a lot from how these other communities implement it," Thomure said, especially in community conversations.

"Even if there's no increased water demand, we have an increasing need in our maintenance and replacement programs," he said.

The way Tucson uses water has also changed, which affects the department's budget and planning.

Tucson customers use the same amount of water as they did 10-15 years ago, so Thomure said the department plans to spend the next two years analyzing the effect that has on the department budget. Its goal is to phase in rate increases, so they are small, but potentially often, he said, rather than implementing occasional, large jumps in cost.

The department is proposing two options to the city for a rate increase. One would raise the average monthly residential bill by $2.50, and the other would raise it by $2.69 a month. The Tucson City Council can choose one of those options, or suggest an alternative, or decide not to raise rates at all.

There are public meetings to get public feedback on the proposal this month.

The journalists roundtable discusses the future of water.
- Linda Valdez of the Arizona Republic talks about two bills in the Legislature that would change the water assurances developers must make before building in some counties.
- Tom Beal of the Arizona Daily Star discusses the lessons the city learned the last time it changed its water supply.
- Vanessa Barchfield of Arizona Public Media discusses calls for University of Arizona President Ann Weaver Hart to resign from her position.

Mobile Unit Looks to Fight Treated Wastewater's 'Yuck' Reputation Tucsonans Use More Water After Hot Days, Not During Tucson Water, Trash Rates Going Up, City Council Decides
By posting comments, you agree to our
AZPM encourages comments, but comments that contain profanity, unrelated information, threats, libel, defamatory statements, obscenities, pornography or that violate the law are not allowed. Comments that promote commercial products or services are not allowed. Comments in violation of this policy will be removed. Continued posting of comments that violate this policy will result in the commenter being banned from the site.