The Art of Paying Attention: Snakes

Many people happily share their yards with creatures that fly and hop, but what about the ones that slither? by Beth Surdut Tweet

Artist and writer Beth Surdut listens to ravens, and has paddled with alligators in wild and scenic places. She also knows that true adventure can be found out in the garden -- sometimes with rattles, and sometimes without...

“Any glimpse into the life of an animal quickens our own and makes it so much the larger and better in every way.” ~ John Muir

I was experiencing an “ohh, look, a tiny baby bunny” moment, when an impressively large gopher snake zoomed across the yard like a kid on a bike when the ice cream truck is in the neighborhood—head up, jaws wide open, and only one thing in mind. I know everybody’s got to eat, but not in front of me. I have a hard time watching those nature TV specials where the antelope/bunny/mouse/cute thing gets chomped. So, I literally ran interference, yelling, “No you don’t!” while chasing a five-foot long snake the size of my fist, whose earless body can transmit my vibrations through skin, muscle, and bone.

I don’t want to send this beautifully patterned reptile--or any other-- to its next incarnation as a belt or shoes; but, since we all can’t just get along, and these snakes can have a quarter- mile territory, I’d like it to move on. A challenge-- my yard is a snake’s Eden with fresh-water stations, shade, baby birds, bunnies, ground squirrels, a variety of lizards to eat, and a human who doesn’t want to kill snakes, just discourage them.

The gopher snake, also called a bull snake, is non-venomous, but can mimic a rattlesnake even though it has no rattles. Now coiled and, for lack of a better word, sulking under a lilac bush, this snake has the ability to flatten its head, vibrate its tail and hiss like a rattler, but other than bunny bloodlust, there was none of that action and no aggression. 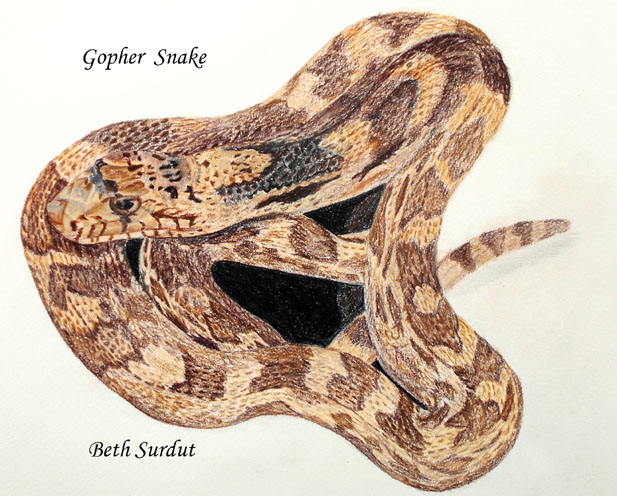 Eyeing the sharp end of a long-handled hoe, I considered my stance on live and let live. Yup, still not a murderer. The tiny bunny was nowhere in sight, so I did the only reasonable thing I could think of—I ran to get a very long stick and my camera.

Mighty hunter that I am, I spoke softly and poked the big stick very gently at the tail to coax the serpent into leaving paradise. It complied, slowly. Stretching out, it nosed upward slightly, tongue tasting the air as it slithered out to the driveway and camouflaged itself on a welcome mat of accumulated dead leaves.

I nudged the tip of the tail again, and, when it didn’t move, I explained loudly that it should find a new zip code. Snake languidly moved another ten feet under foliage so thick, I couldn’t see a trace.

Did I mention I was born in the Chinese year of the snake? 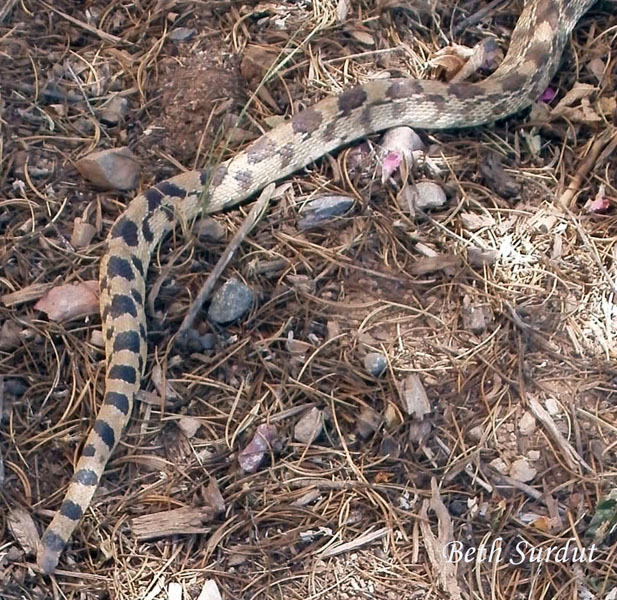 This past year, in one of my Paying Attention workshops, a woman told me her sister and husband had bought a house with acreage in the Chiricahuas, from an old man who told them that there was a diamondback named Charlie on the property. He said that snake was at least 25 years old. Had never hurt anybody. One day, the woman and her sister were standing by a stream there and her sister said, “Don’t move, but look down in the grass between us.” “I could see the diamond pattern and that it was big…and then we kind of went crazy,” she said to me. Her voice rose and she talked in that way people do when they’re really flustered. “What about the grandchildren? What if they play down here? We have to do something.” Her sister told her to go get her husband from the house and tell him to bring his gun. There was such sadness in that woman as she quieted down and said, “I did. I went and got him. He shot that snake in the head. He killed it because we were hysterical. We weren’t thinking…if only we’d thought about what we were doing. Because when we settled down, I realized we’d killed Charlie. I felt so bad and I still do. If we’d only thought.” 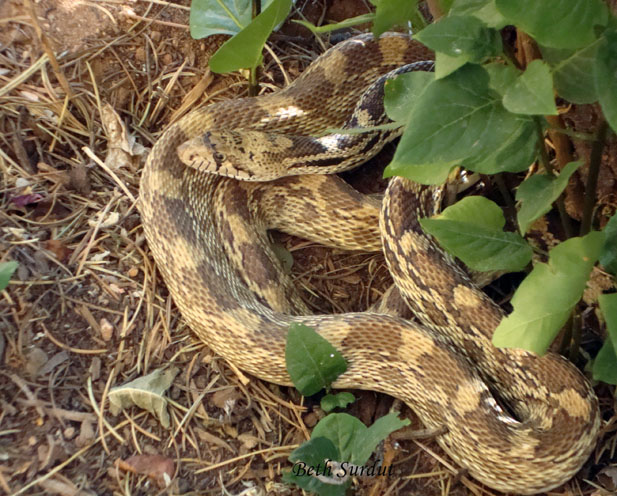 I saw the tiny bunny once a couple of days after the deflected gopher snake attack. About a week later, while watering, I spotted two separate pieces of bunny fur with chunks of skin and meat attached. Not unusual—almost every critter here is food for another. But, even knowing that, I stood in bleak sadness, letting the hose pour costly lifeblood onto the always thirsty desert floor. But then, I saw movement—a youngster! Little furred ears, their insides the color of peaches, a white puff of tail! I named it Survivor.

A baby gopher snake, only as big around as my index finger, slipped gracefully past me this morning on its way to a plant-filled no-man’s-land between me and the neighbor’s—I hope it likes it there.

Seasons, plants and animals of the Sonoran Desert and Citizen Science: On Saturday, June 4th, 2016 you can join Beth Surdut at Agua Caliente Park for an introduction to the "Nature’s Notebook" program, and the plants and animals that appear each season here in the Sonoran Desert. Learn how to document what you see and contribute your findings to the National Phenology Network to help answer local and national questions about species response to climate change. 8 am-11am

Sponsored by Pima County and the USA National Phenology Network, for ages 12 and up.

Researcher: Snakes holding steady against Tucson sprawl The Art of Paying Attention: Alligators The Art of Paying Attention: Zebra-Tailed Lizards
By posting comments, you agree to our
AZPM encourages comments, but comments that contain profanity, unrelated information, threats, libel, defamatory statements, obscenities, pornography or that violate the law are not allowed. Comments that promote commercial products or services are not allowed. Comments in violation of this policy will be removed. Continued posting of comments that violate this policy will result in the commenter being banned from the site.