Trump has said he is willing to keep some parts of the Affordable Care Act. by Christopher Conover TWEET SHARE 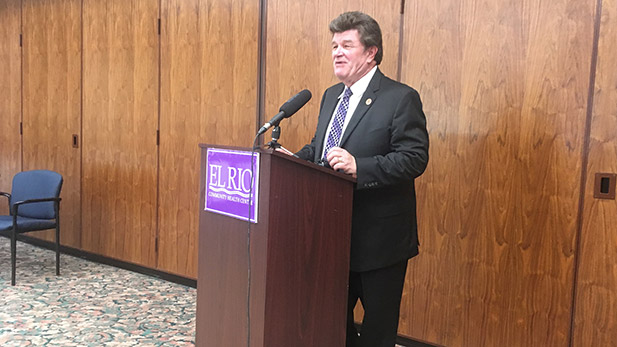 State Sen. David Bradley, D-Tucson, speaks at a news conference urging the Trump administration not to get rid of Obamacare before crafting a replacement. December 20, 2016
Christopher Conover, AZPM
LISTEN

Health care advocates held a news conference in Tucson on Tuesday to urge President-elect Donald Trump and Congress to only repeal the Affordable Care Act once there is a replacement.

Nearly 200,000 Arizona residents get their insurance through Obamacare, many with federal subsidies.

“When you look away from the poor, they don’t disappear. In fact, if you don’t provide services for them to help overcome minor problems they quickly become major ones,” said Democratic state Senator David Bradley.

Officials with El Rio Community Health Center said before the Affordable Care Act became law more than a quarter of their patients did not have insurance. Two years later, that number was down to 12 percent.

The advocates said Obamacare is not perfect but any replacement plan needs to include certain elements of the law. Those elements include allowing children to stay on their parent’s health plan until they are 26 years old, allowing pre-existing conditions and banning lifetime caps.

Bradley said the Medicaid expansion passed by the Legislature and signed into law by Gov. Jan Brewer must also be maintained. He said if the expansion ends the state will have a $300 million hole in the budget.

Trump has said in interviews he is willing to keep some parts of the Affordable Care Act and he won’t sign a repeal until a replacement is available.

What's Next for Arizonans Who Gained Coverage Under Obamacare? Survey: Most Arizonans Want Obamacare Fixed, Not Axed Ducey: Health Care Proposal Needs Work
By posting comments, you agree to our
AZPM encourages comments, but comments that contain profanity, unrelated information, threats, libel, defamatory statements, obscenities, pornography or that violate the law are not allowed. Comments that promote commercial products or services are not allowed. Comments in violation of this policy will be removed. Continued posting of comments that violate this policy will result in the commenter being banned from the site.