At the Whole Foods store on Speedway Boulevard, Medicine of the People blends right in. The glossy tins of sore-joint salve and lip balm form a rainbow of color, and their design has the clean lines of a corporate marketing campaign. But while the cruelty-free nail polish and jade luck charms that flank this display traveled thousands of miles to get here, the elegant tins started their lives just up I-10, in northeastern Marana.

Virginia Boone lives there, in a purple house on four acres off a remote dirt road. Boone is Navajo, and for fifteen years she has turned the traditional herbal medicine of her people into Medicine of the People—a line of balms, lotions, teas and other natural products that she sells at Native American markets and pow wows, on the Internet and, most recently, in stores and gift shops.

The idea may seem like a tightrope-walk: selling the fruits of sacred knowledge without compromising tribal traditions. But Boone says she's simply carrying on her family's work, which is to bring healing to anyone who needs it. 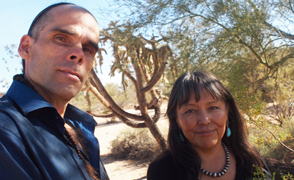 Leonard Marcus and Virginia Boone have turned her knowledge of Navajo herbal medicine into a successful local business.
Gisela Telis

Boone grew up outside Flagstaff, near what is now known as Camp Navajo. Her father, Sam Boone, worked there after serving in World War II and Korea. The son of a medicine man, he had learned from his clan how to properly gather and prepare medicinal herbs.

Navajo herbalists must remember when and where each plant is most plentiful and potent, and they must know the right prayers, offerings and other rituals to show respect to the spirits of the plant world.

The plants are then used in healing ceremonies and in everyday life to treat arthritis, upset stomach or other common ailments. Boone and her siblings learned about them by watching their father.

"We went gathering together," she says. "He was very casual about it. He just did it in front of us and that's how we learned."

The problem, as Sam Boone saw it, was that not everyone had access to a knowledgeable healer or a sufficiently varied selection of plants. So, in the 1970s, he began selling the plants in small markets on the reservation and teaching people to use them.

"He really decided he was going to help his people in this way," Boone recalls. "He just loved the people, and he wanted their minds and bodies to be better."

His commitment to sharing the medicine with everyone met with resistance from more traditional tribe members, and that’s not surprising, says Wade Davies. Davies, a historian at the University of Montana in Missoula, has studied Navajo healing and health care.

“In Navajo healing, it’s always been about face-to-face contact and relationships with people,” he says. “If they’re strangers, then that could be an issue. There’s a parallel to when Native American elders started telling their stories to anthropologists—some people thought they shouldn’t, because that might be disrespecting the knowledge. But some elders told those stories anyway because they were afraid that, if they weren’t recorded somewhere, the stories would be lost.”

Sam Boone’s work did help preserve the tradition; he taught several apprentices and became a founding member of the Arizona Ethnobotanical Research Association (AERA). He also planted the seed of socially responsible work in Virginia Boone, one that stayed with her even as she moved away and began her own life.

Boone lived in California and Hawaii, raised a daughter and worked as a ranger with the National Park Service and the Forest Service before returning to Arizona in the mid-1990s. It was then that she met Leonard Marcus, a part Potawatomi transplant from New York, and the two decided to make a go at life together in Tucson. 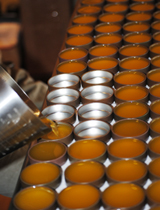 From gathering and drying the herbs to pouring salve into their trademark tins, Marcus and Boone do all the work of running Medicine for the People themselves. Boone's business brings her family's traditional knowledge to the modern market. (PHOTO: Leonard Marcus) 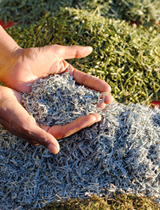 "And then I was sitting there one day and I saw there was an Indian market at the Tucson Indian Center, and I thought I would make some salves," Boone says.

She bought cheap plastic bottles, hand-wrote some labels and instructions, and simply showed up. She admits, laughing, that she "had no idea what I was doing."

The pair traveled widely throughout Arizona, New Mexico and Utah to find the right plants, handcrafted all the balms, teas and other products, and logged 50,000 miles a year as they worked the circuit of Indian fairs, shows and conferences.

All the while, the two remained true to Sam Boone’s teachings, taking as little from the earth as possible, offering corn pollen to the plant spirits, praying for their customers’ healing and handling the herbs in what Marcus calls the “beautiful way.”

“We can’t make it up as we go along,” he says. “We have to approach what we do with respect and with the knowledge that our people are watching.” 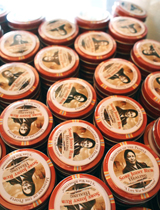 Boone's sales have grown steadily since 1997. "People are starving for this," says fellow herbalist and businesswoman Phyllis Hogan. "It's a healing for their spirit." (PHOTO: Gisela Telis)

And now many outside the Navajo community are watching as well. While Native American-owned businesses in Arizona have taken a hit during the recession, Boone’s business has continued to steadily grow and Medicine of the People reports its busiest Christmas ever.

That speaks to a need people feel even in spite of hard times, says Phyllis Hogan, AERA director and owner of the Winter Sun Trading Company in Flagstaff, which also sells medicinal herbs.

“People are starving for this, they’re starving for a connection to the earth,” she says. “Medicine of the People makes them feel there’s somebody out there who has that connection. It’s a healing for their spirit.”

Hogan was Sam Boone’s apprentice in the 1980s, and she says she’s watched Boone and her sisters—who continue to gather and sell herbal medicines on the reservation—carry on their father’s work with joy and interest.

“They’re such grounded, spiritual women,” she says. “They’re courageous visionaries to do what they do. Not everyone can walk in both worlds, but they do it.”

Boone and Marcus have “retired” from the fair and pow wow circuit and are currently focusing their efforts on wholesale clients and Internet sales. Boone continues to hone her herbal medicine skills, studying with an 87-year-old aunt who is also an accomplished healer, and has hopes of returning to her father’s land to give back to its people. For now, her handcrafted medicine is her way of giving back.

“People need to wake up, to learn to use their own way and their hearts, and we help show them the way,” she says. “If it will put a little light in their lives, that’s all we can ask for.”

Art by incarcerated people going on display at UA Museum of Art New online tool points consumers Native American-owned businesses Youth Crossing Gender Borders, Episode 2: Changing Expectations
By posting comments, you agree to our
AZPM encourages comments, but comments that contain profanity, unrelated information, threats, libel, defamatory statements, obscenities, pornography or that violate the law are not allowed. Comments that promote commercial products or services are not allowed. Comments in violation of this policy will be removed. Continued posting of comments that violate this policy will result in the commenter being banned from the site.