Lung cancer is the leading cause of cancer deaths in US, and has many forms. by Sara Hammond TWEET SHARE 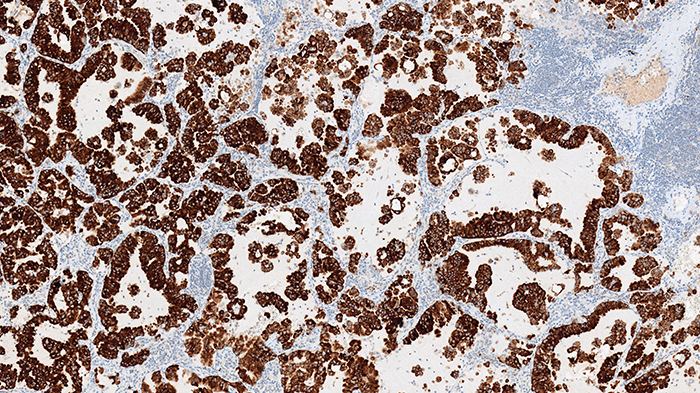 Lung cancer is the leading cause of cancer deaths in the United States. It’s estimated that more than 200,000 Americans will be diagnosed with lung cancer this year, and many find out when the disease is in an advanced stage.

“What we’ve learned over the past 15 to 20 years is that lung cancer isn’t one disease like we used to think. Lung cancer is actually multiple diseases at the molecular level. And now, we have the technology to determine which particular molecular type of lung cancer a patient has,” said Dr. Eric Walk, the company's chief medical officer.

Walk said having that knowledge will help oncologists decide how to treat the cancer.

Swiss pharmaceutical company Roche developed one of the three drugs approved to treat the strain of cancer, which affects about 5 percent of people diagnosed with non-small-cell lung cancer.

Ventana Medical Systems was founded in 1985 by University of Arizona pathologist Thomas Grogan.

UA Cancer Center Delivers Data to Help Skin Cancer Patients Episode 36: A New Window on Cancer Pima County moves to Prioritized 1B for COVID-19 vaccines
By posting comments, you agree to our
AZPM encourages comments, but comments that contain profanity, unrelated information, threats, libel, defamatory statements, obscenities, pornography or that violate the law are not allowed. Comments that promote commercial products or services are not allowed. Comments in violation of this policy will be removed. Continued posting of comments that violate this policy will result in the commenter being banned from the site.