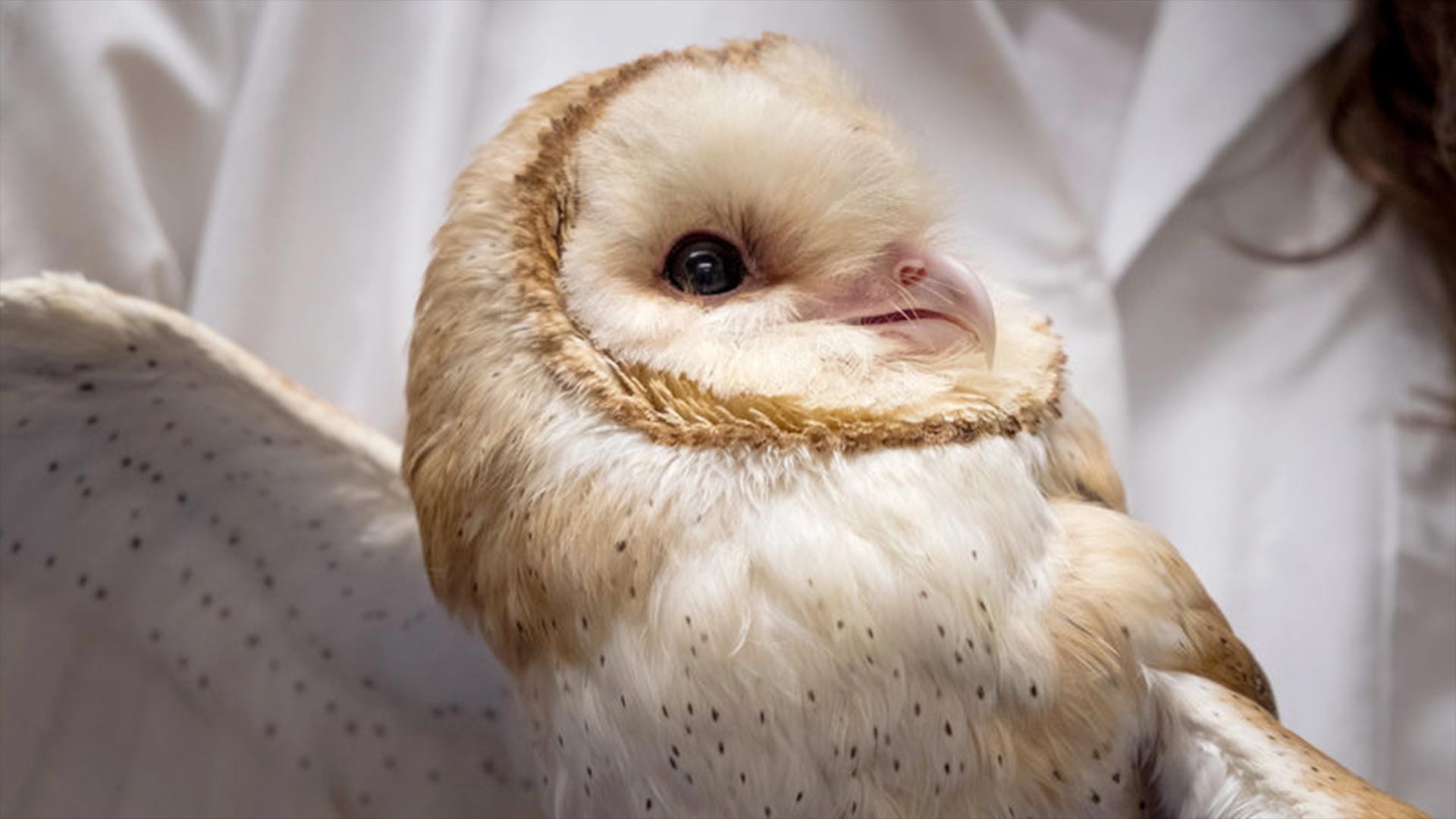 Kids with ADHD are easily distracted. Barn owls are not.

So a team at Johns Hopkins University in Baltimore is studying these highly focused predatory birds in an effort to understand the brain circuits that control attention.

The team's long-term goal is to figure out what goes wrong in the brains of people with attention problems, including attention deficit hyperactivity disorder.

"We think we have the beginnings of an answer," says Shreesh Mysore, an assistant professor who oversees the owl lab at Hopkins. The answer, he says, appears to involve an ancient brain area with special cells that tell us what to ignore.

Mysore explains his hypothesis from one of the owl rooms in his basement lab. He has a distraught bird perched on his forearm. And as he talks, he tries to soothe the animal.

The owl screeches, flaps and digs its talons into the elbow-length leather glove that Mysore wears for protection. He covers the bird's eyes with his free hand and hugs the animal to his chest. 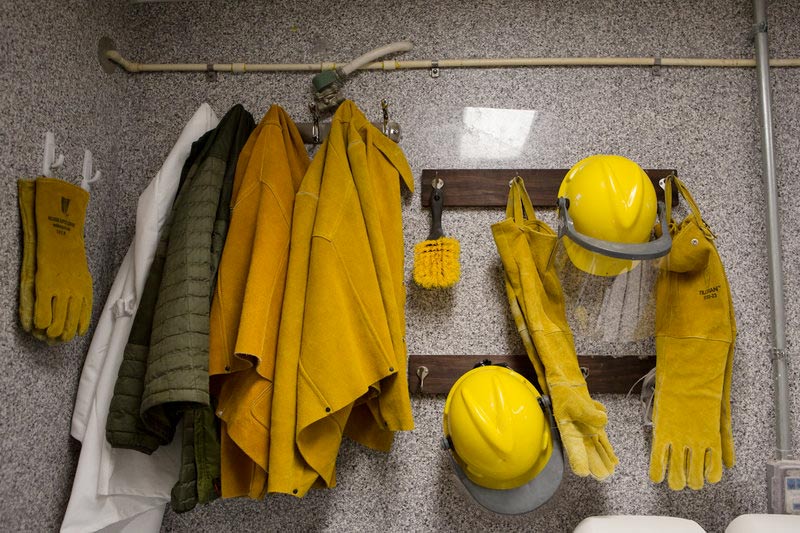 Leather jackets, helmets and gloves that scientists wear to protect themselves hang in the owl room at Johns Hopkins.
Meredith Rizzo/NPR 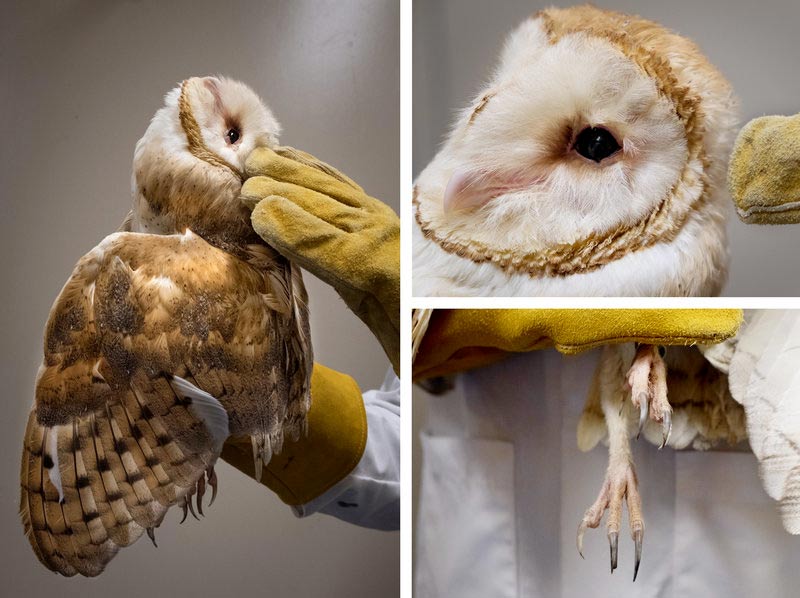 One reason Mysore studies owls is that they must turn their heads to look at something (left), which makes it easy to tell what they're paying attention to. Owls also have acute hearing (top right) — their ears capture sound at the edge of their concave faces. Their keen sight and hearing allow them to zero in on small prey using sharp talons (bottom right).
Meredith Rizzo/NPR

The owl, no longer able to focus on the movements of his human visitors, goes quiet.

When it comes to paying attention, barn owls have a lot in common with people, Mysore says.

For a hungry owl, important information might be the sound of a wood mouse scampering through the grass. For a human parent, it might be the cry of a baby in the next room.

In either case, hearing the sound causes a distinct response in the brain.

"When we pay attention to something, we're not just focusing on the thing that we want to pay attention to," Mysore says. "We're also ignoring all the other information in the world."

"The question is, how," he says. "How does the brain actually help you ignore stuff that's not important for you?" 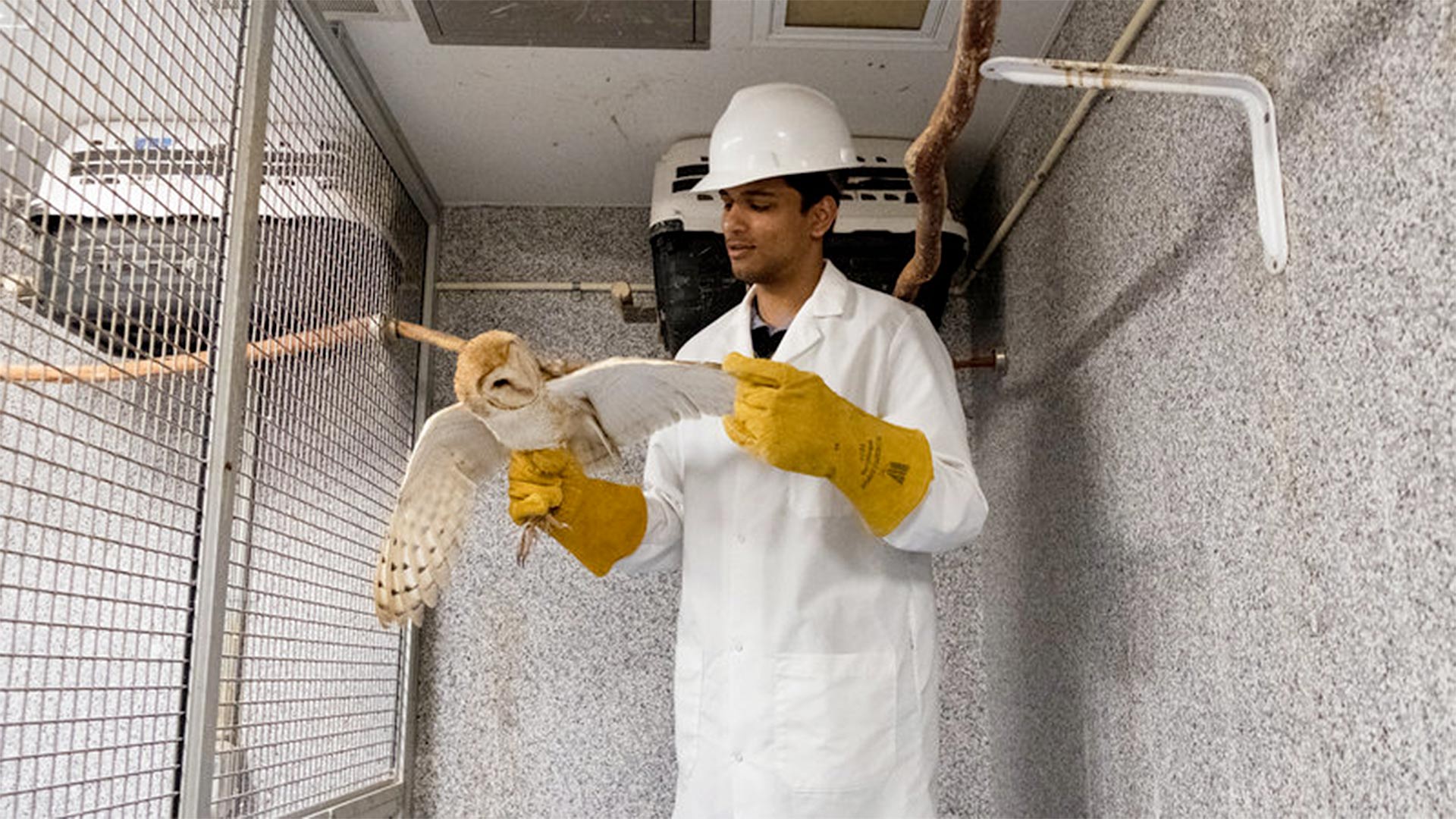 Nagaraj Mahajan, a researcher with Mysore, holds one of the barn owls in the basement lab at Johns Hopkins University. The team is trying to learn how the brain tunes out distractions and focuses on what's important.
Meredith Rizzo/NPR

"Pretty much name a psychiatric disorder, and there is some kind of attentional deficit associated with it," Mysore says.

The problem is that scientists still don't know much about the brain's system for suppressing distractions.

There's no simple way to study it in a human brain, Mysore says, but owl brains offer a good substitute. The birds have a predator's ability to focus, as well as keen eyesight and hearing. They also have a brain organized in a way that's easy to study.

Because owls have eyes that are fixed in their sockets, the birds must swivel their head to look around. That makes it straightforward for the researchers to tell what they're paying attention to.

So Mysore's lab is doing experiments in which an owl must decide whether to focus on something it hears or something it sees. For example, an owl might be listening to bursts of noise coming through special earphones while a computer monitor shows an object approaching quickly.

That sets up a competition between these stimuli in the midbrain, an ancient part of the brainstem that can be found in animals ranging from reptiles to people.

"And when we're presenting these stimuli, we're measuring activity in key areas in the midbrain to try and figure out how that stimulus competition is actually being implemented or carried out by neurons in the brain," he says. 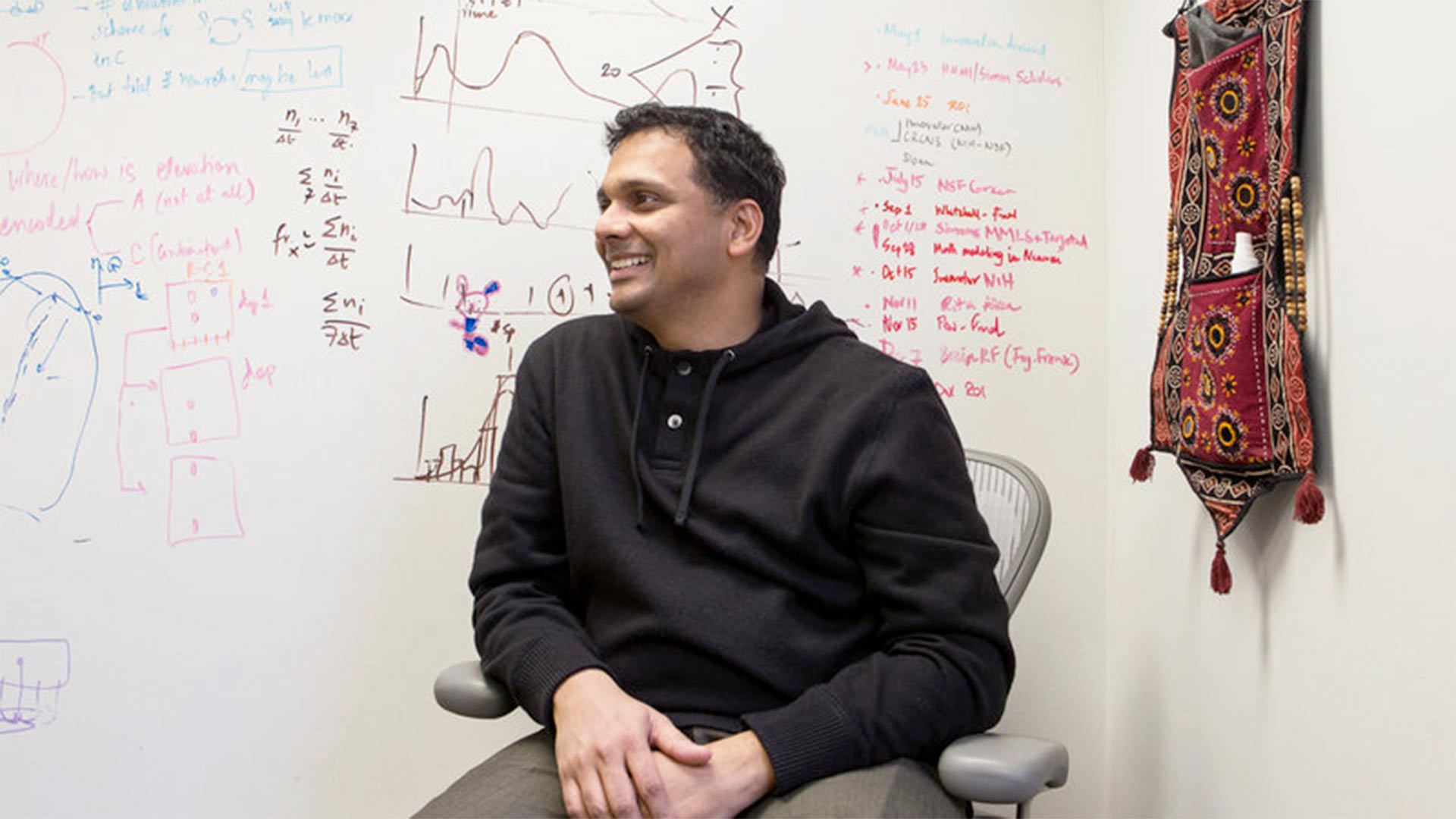 Mysore has been studying a particular group of neurons in the midbrain that suppresses distractions.
Meredith Rizzo/NPR

Several years ago, Mysore and Eric Knudsen, a professor at Stanford, identified a system in the owl midbrain that appears to control which stimulus to ignore. Now, Mysore's lab is trying to understand exactly how that system works.

"One of the coolest things has been the identification of a particular group of neurons in the midbrain that we think are the ones controlling distractor suppression," he says.

In other words, these seem to be the precise neurons that tell a brain when to start ignoring sights and sounds that aren't important at that moment.

That could be critical to understanding why people with attention disorders have so much trouble ignoring distractions, Mysore says.

The lab's next challenge is to show that mice, and people, also have these special neurons. If they do, Mysore says, it could provide a new target for treatments aimed at a wide range of disorders that affect attention.