The inspiring story of a courageous band of young civil-rights activists who journeyed through the Deep South in 1961. Tuesday at 8 p.m. on PBS-HD 6. by Colleen Greer TWEET SHARE

In 1961, segregation seemed to have an overwhelming grip on American society. Many states violently enforced the policy, while the federal government, under the Kennedy administration, remained indifferent, preoccupied with matters abroad. That is, until an integrated band of college students — many of whom were the first in their families to attend a university — decided, en masse, to risk everything and buy a ticket on a Greyhound bus bound for the Deep South. They called themselves the Freedom Riders, and they managed to bring the president and the entire American public face to face with the challenge of correcting civil-rights inequities that plagued the nation. 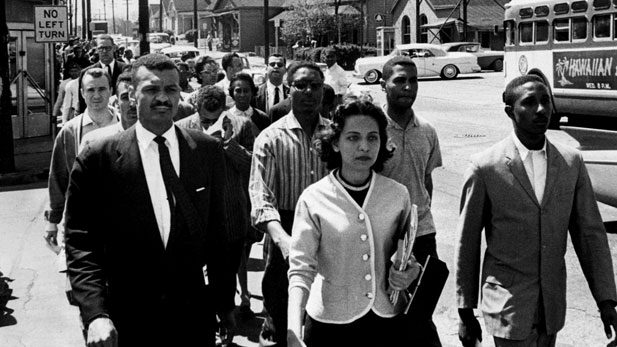 Before they participated in the Freedom Rides, C.T. Vivian, Diane Nash (front row on left) and other demonstrators marched to Nashville City Hall on April 19, 1960.
PBS

Veteran filmmaker Stanley Nelson’s inspirational documentary is the first feature-length film about this courageous band of civil-rights activists. Gaining impressive access to influential figures on both sides of the issue, Nelson chronicles a chapter of American history that stands as an astonishing testament to the accomplishment of youth and what can result from the incredible combination of personal conviction and the courage to organize against all odds. (Shari Frilot/Sundance Film Festival)

Finding perspective on race and privilege: "Master Harold"... and the Boys "The 89-90 Trip" reaches its destination. The 89-90 Trip: Canada at Last
By posting comments, you agree to our
AZPM encourages comments, but comments that contain profanity, unrelated information, threats, libel, defamatory statements, obscenities, pornography or that violate the law are not allowed. Comments that promote commercial products or services are not allowed. Comments in violation of this policy will be removed. Continued posting of comments that violate this policy will result in the commenter being banned from the site.