I came so close. I almost beat the odds: guests and fish smell after three days; 95 of all sports injuries occur on the third day. Pretty smug by 6:00 p.m., when I hit the wall: full-blown tight-lipped hissy fit nasties. Dang.

But let’s start with better times. Day Three was brought to you (to us, really) by Auntie Pat, or Patricia Schnebly Ceballos to the larger world. It was a good fit because it involved lots of roads, lots of memories and lots of new experiences, and she revels in all three of those things. She’s the only person I know who makes even Larry and I look slightly…relaxed. She’ll say in an email: “So I drove back from Sedona to Winslow this morning in time to shell fresh shrimp I had flown from Mexico to host a party in my back yard for 64 members of my PEO. I got everything cleaned up by midnight because tomorrow morning I have a meeting in St. Johns.” And you think…and you saw 80 in your rear-view mirror a while back. She’s indomitable.

Anyway, when we last talked, I’d been owning the lobby in Panguitch. Because food is never far down on my list of priorities, I’d asked the clerk when we checked in about breakfast options. She said both corners of the street had cafes, and the one across the street is better. Fortunately, we moved slowly enough that we could walk in just after 8:00 a.m. when it opened. 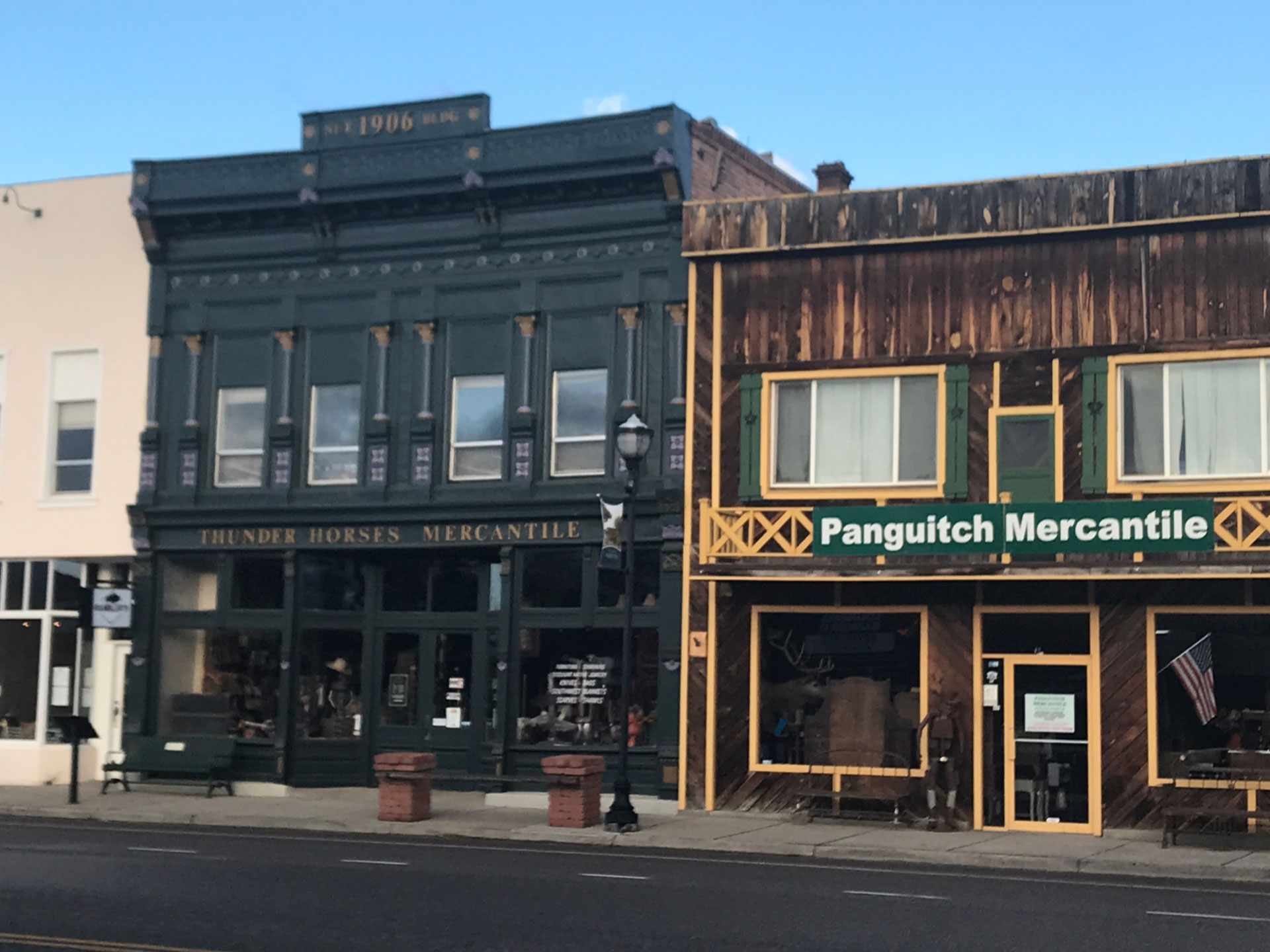 There are breakfasts, and there are breakfasts that delight. This was the latter; the Cowboy Cafe was able to meet the request for an egg white smoked trout mushroom omelet. Each bite had a roaring river, loamy land, and protein. Man, oh man.

There were the obligatory branding irons on the walls, Jonnie the waitress who couldn’t work her computerized order machine worth shootin’ but was long on hospitality, and pecky pine walls, as Larry described them. I only have birds-eye maple in my wheelhouse.

Packed up and on the road to Wasatch by ten: Mt. Pleasant, Utah was where Larry did two years of boarding school. I’ve known most of my life about how his father, the rural teacher, wanted his son to have a top-flight education that area high schools couldn’t offer, so he scrimped and saved and shopped off said, son. Great intentions. What marred it was that he’d pushed Larry so hard he was two years ahead in school, so 11-years-old as a freshman. Think back to who you were at 11 and be two years younger than new peers in a strange place. Understandably, Dad hasn’t raced back to reunions, but not because Wasatch was lacking; Auntie Pat made great friends and had escapades she still won’t tell me about during those years.

Fortunately for Lar, WWII came along and he found out at the end of the term he wouldn’t be coming back because Ellsworth had decided that 44 years old or not, he was joining the Marines. The family followed to Mountain View, California. Lar had a great two years going up to San Francisco to watch big bands, rattle around the city with his friend Ron, and as a high school journalism student, attend the beginning of the United Nations and see Joe Rosenthal speak.

But now we’re entering Mt. Pleasant, having passed through multiple picturesque towns with 110 E. S. Streets and such. The school surrounds what looks like a parade ground but is a soccer field now and was a football field back in the day. 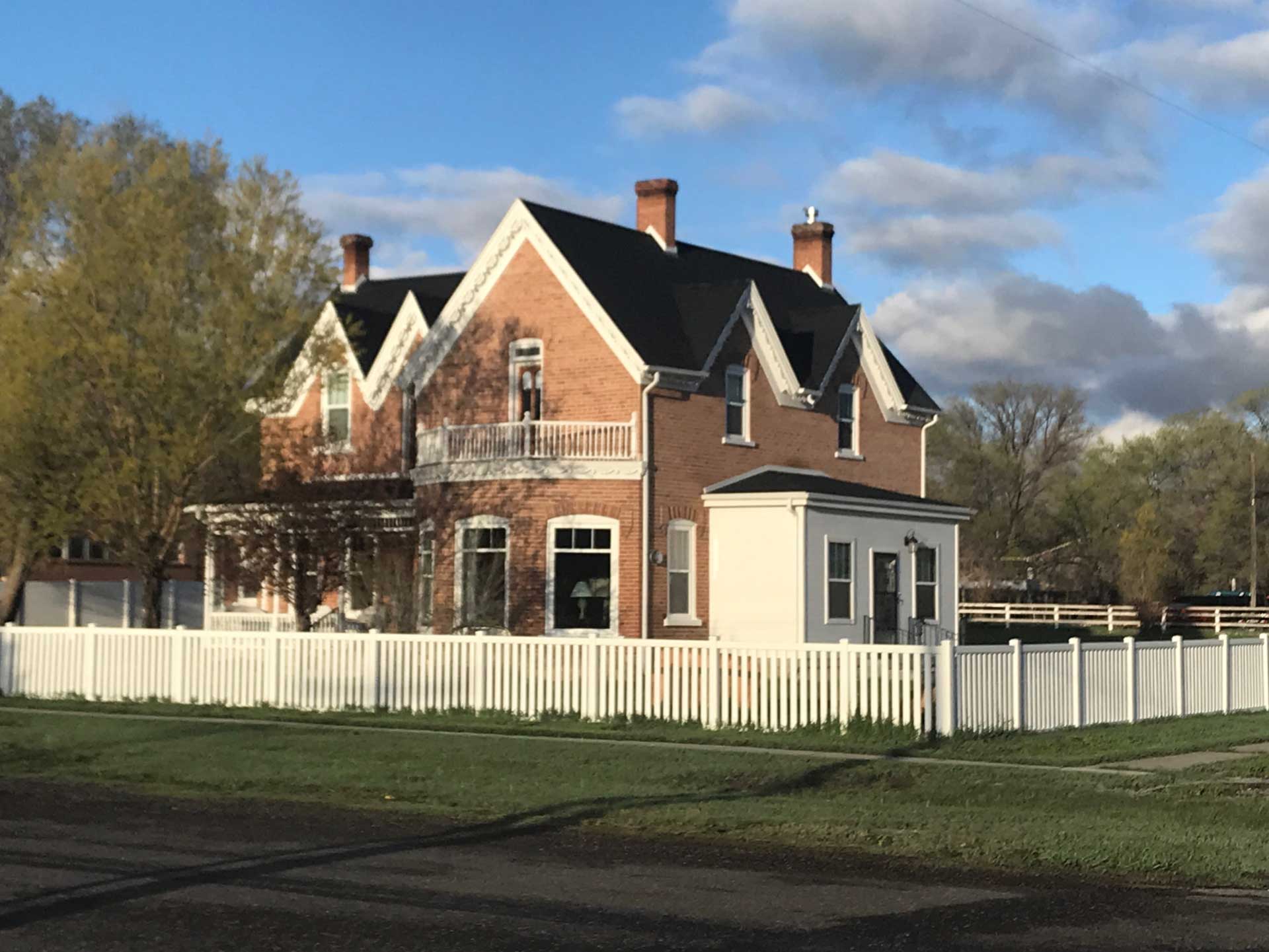 We meet a genial guy named Ty Kennedy who tells us lunch is about to start and to tell anyone he said we could join them.

I want to see if the system has changed since 1939 when ten students sat for a month at one table with a faculty member who led the grace and steered the conversation. It has, the faculty told me. But the tables looked not all that different, although the dining hall is new. Well, new in the past 78 years. 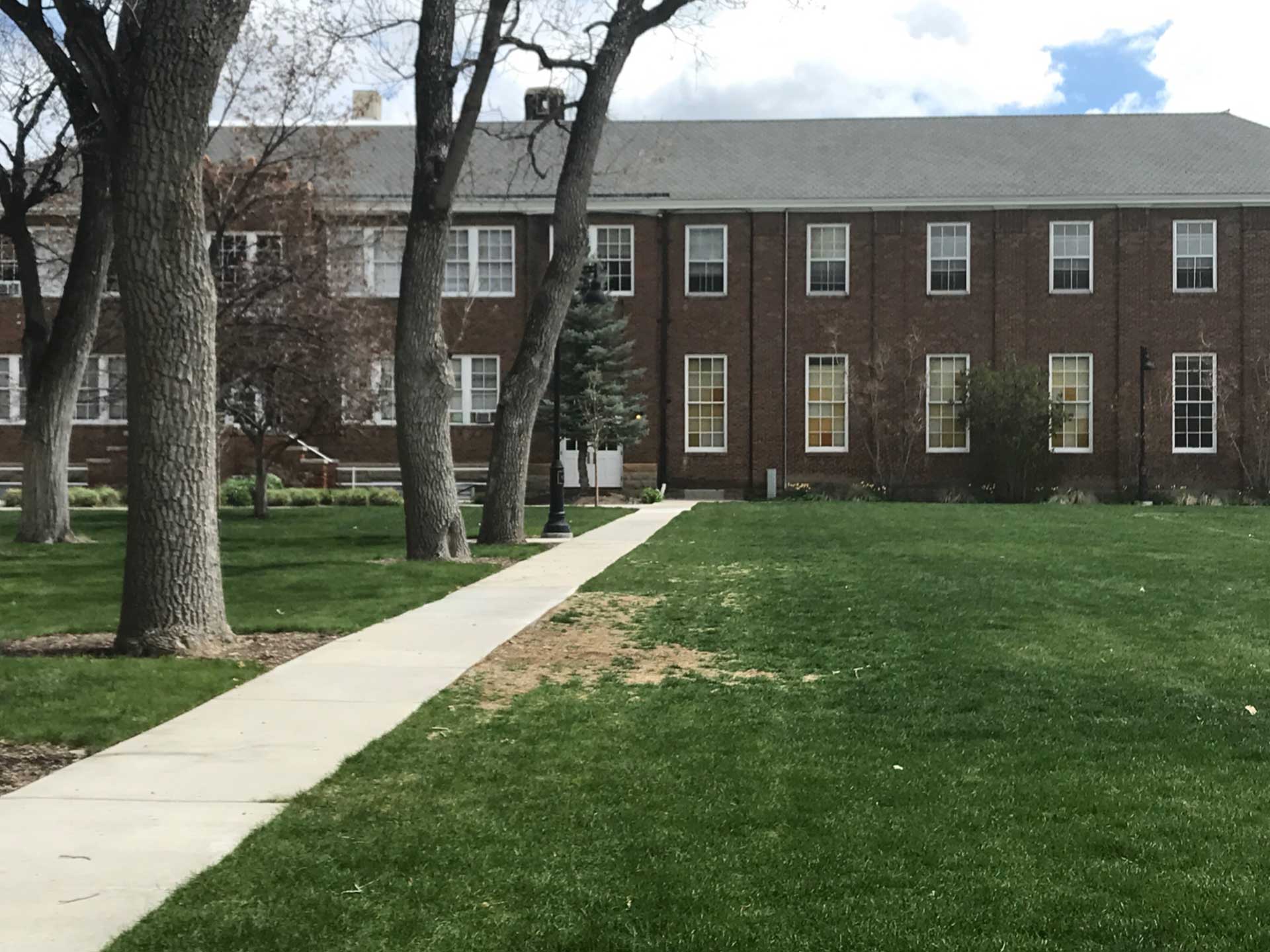 We see what used to be the gym, then Darlington, where Daddy stayed his first year. We creep upstairs (I don’t think he would have, but I’m both journalist and daughter and by golly, you just do it) and find his room! The door is ajar, so I push it. A wormhole of time occurs: this space held this man, but a boy. Wow. One degree of separation again. It’s on the upper right but inside, so it doesn’t show from here. 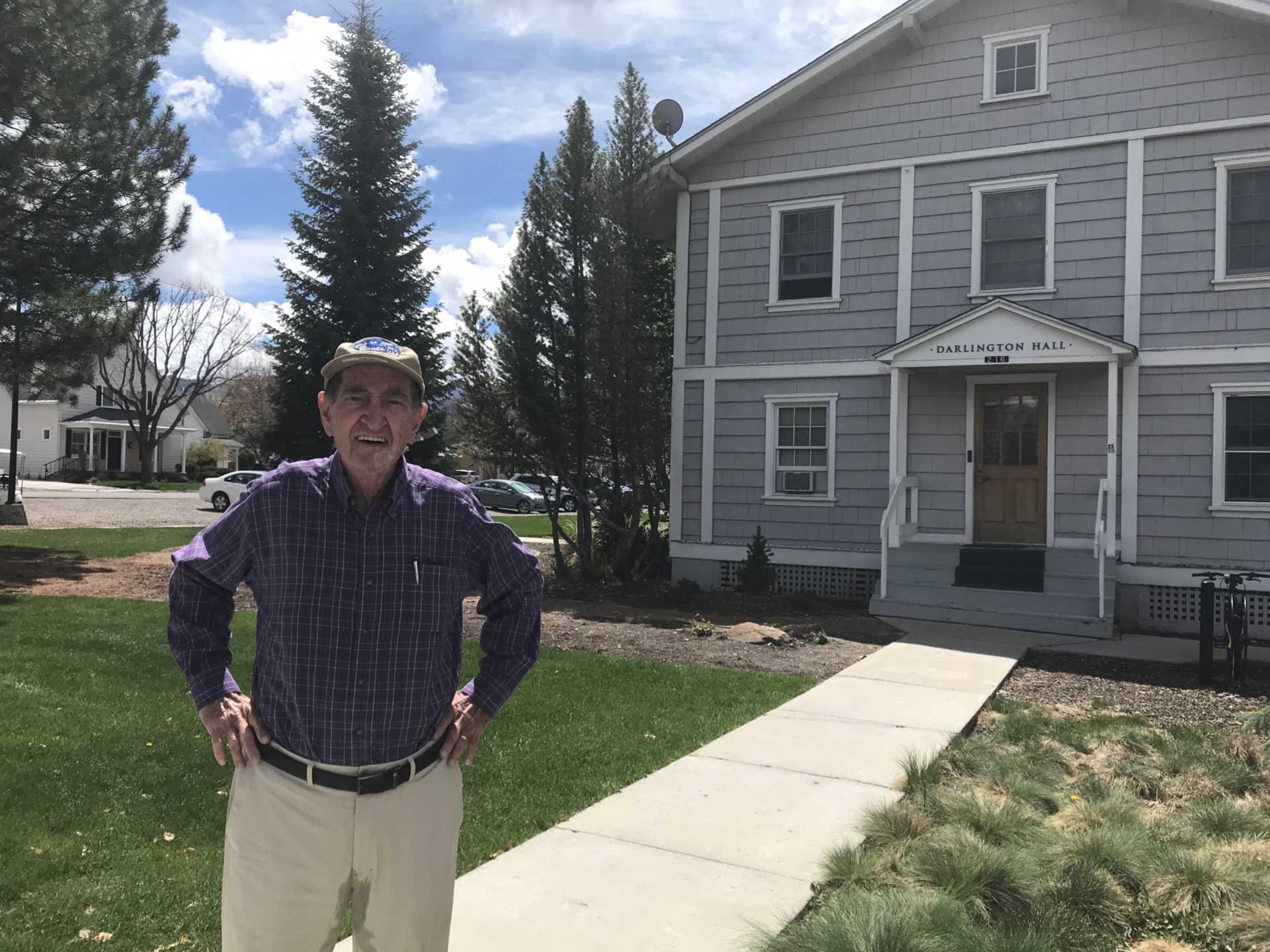 Then we go to the new administration building, and Margaret, the alumni director, is there. She even has a yearbook from Dad’s first year and shows us both his picture and that of Billy Dixon, who was a right bully that made Daddy really appreciate his second-year roommate. (I didn’t do him the honor of taking his photo, but Margaret kindly takes ours and has it in my email before we get to our hotel.) 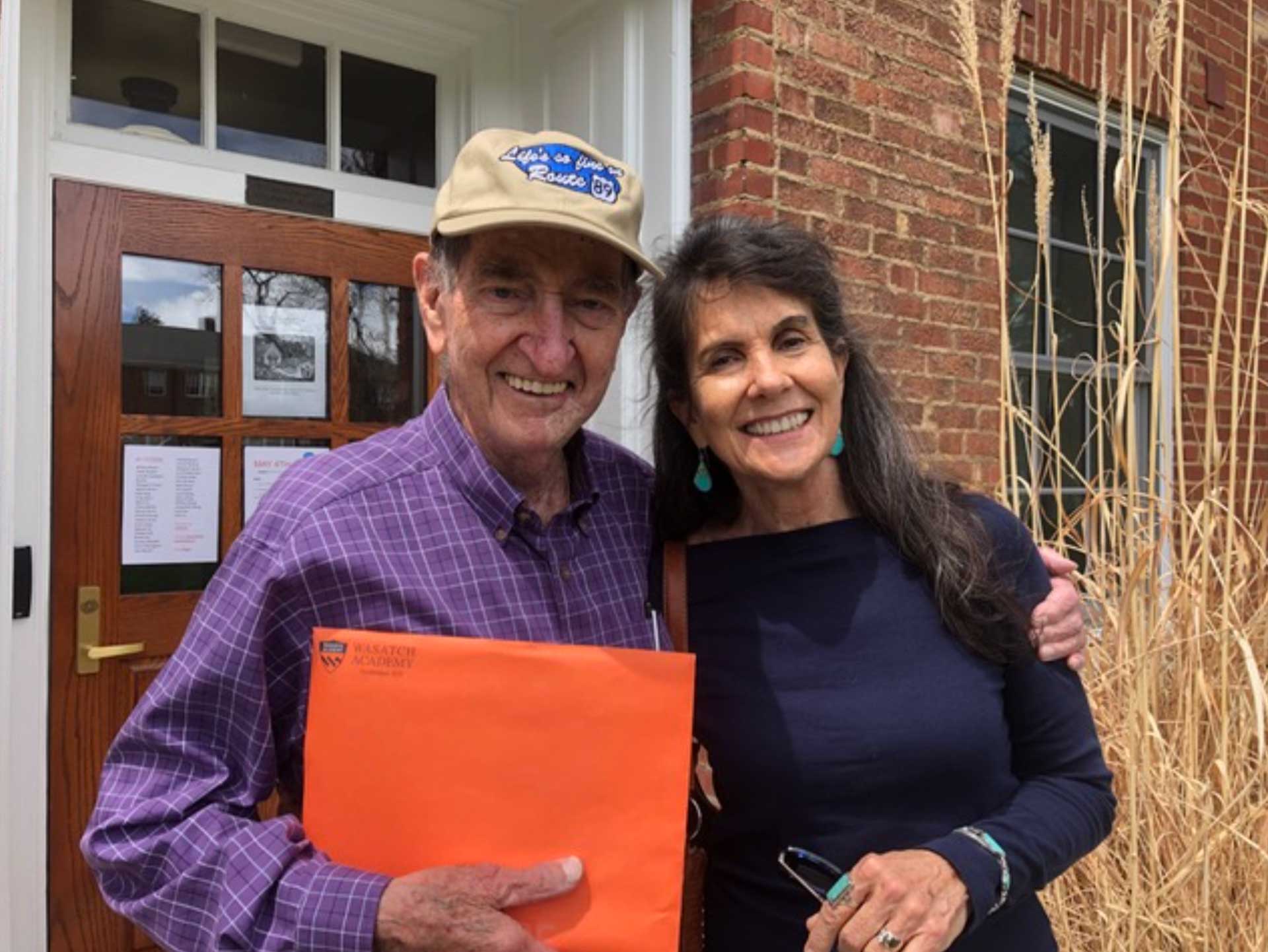 We are glad to see what used to be the chapel and is now the performing arts center where Lar was baptized downstairs, but due to refiguring it’d be hard to find the exact spot. Then we see where he went to class. He breaks down what the weekly 50-cent allowance got him: 25 cents went to ship laundry home in a Bakelite box; a dime to a movie, a dime for a chocolate cone, and the nickel got saved to buy his mother a box of chocolate cherries for Christmas.

I’d thought it might be almost PTSD to be here, since he didn’t have a buddy, and was so very young. But he tells me over lunch that he got good at tennis and played a lot on a now-gone court; that he and others would go out shooting on weekends, and that he’s glad he had the experience.

Relieved, I savor daily dessert: a piece of pecan pie and coffee.

Now it’s time to head for Salt Lake City, watching clouds roil over mountains. Such mountains. They crowd and elbow one another; soaring purple behemoths with rust and green hills chock-a-block with granite up thrusts. All around us, snow-covered and constant.

We see one particularly imposing one that Dad guesses is Nebo, and he’s right. It’s the huge one behind the front foothill. And you can see here what the weather is doing, looming. 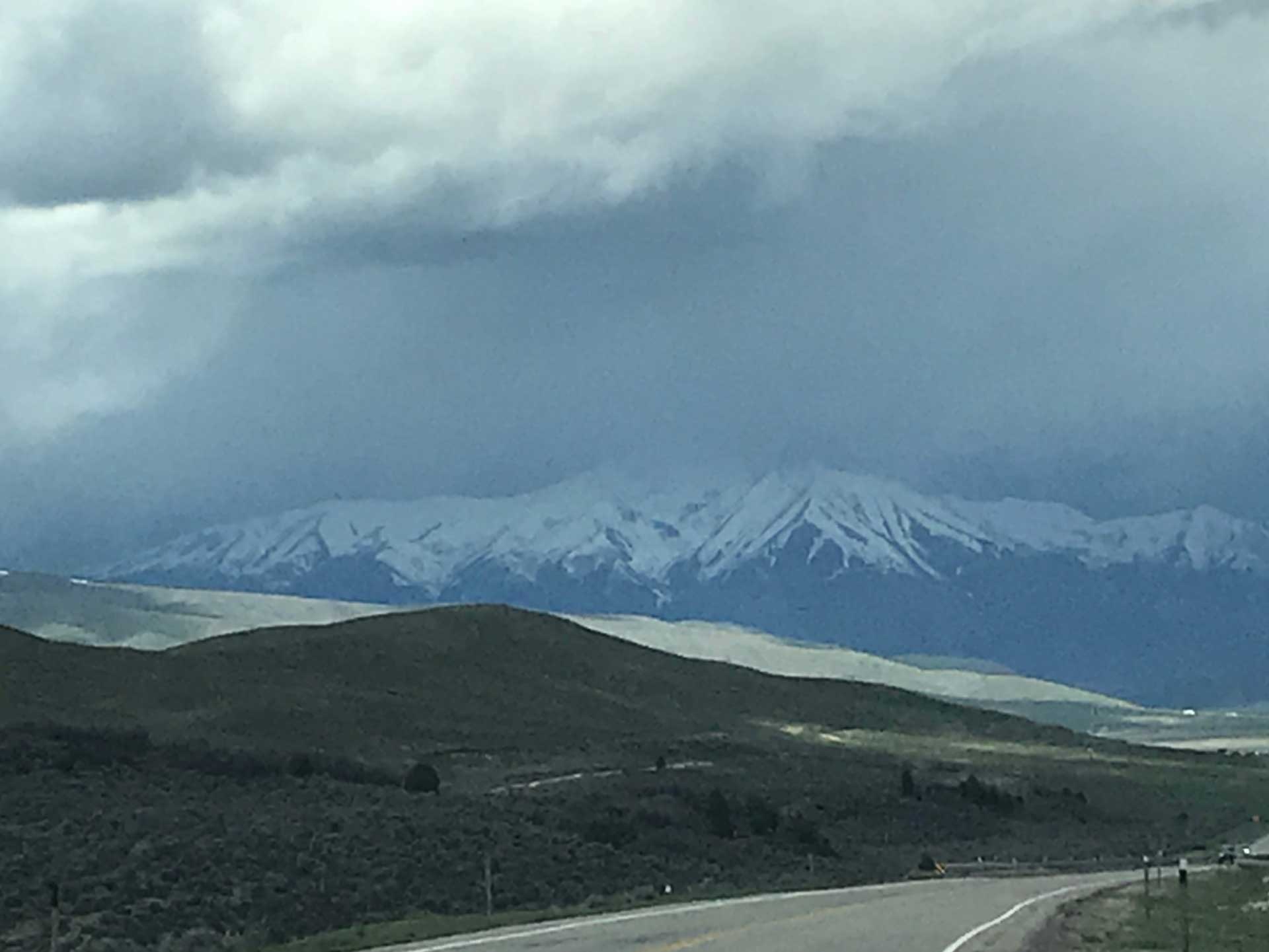 Mount Nebo is the southernmost and highest mountain in the Wasatch Range of Utah.
Courtesy Lisa Schnebly Heidinger

Rain. Lots of it. Even though it makes driving a little more demanding, I’m basking in the water coming to the west, and we are warm and dry. It’s a few hours to Salt Lake City, but still, late afternoon when we get to Temple Square.

Having never seen it but come upon tons of Mormon history writing about Arizona, I’m glad to be here. It’s predictably gorgeous. Maroni is even more striking gleaming against the dolorous sky. 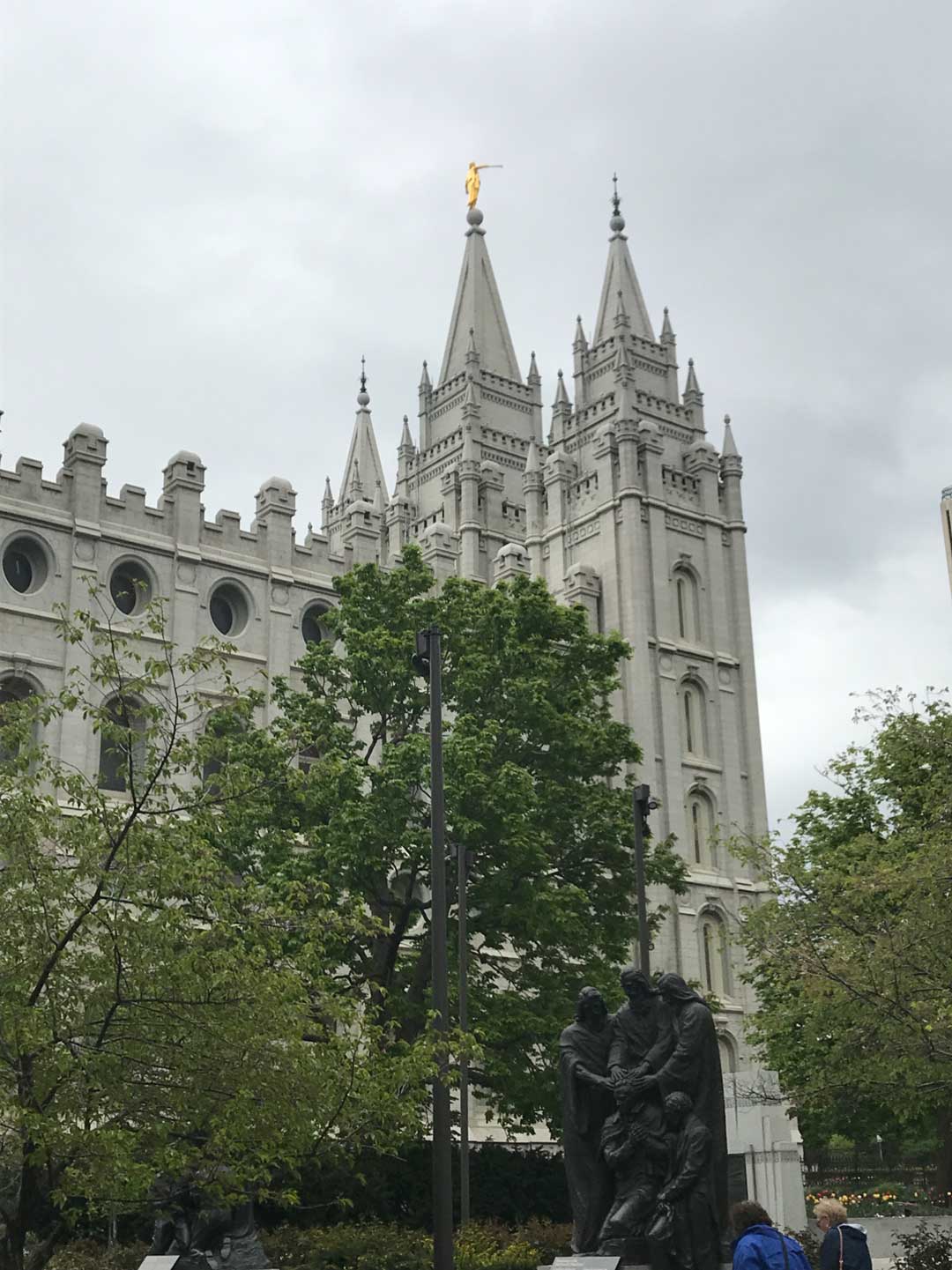 We go into the visitor’s center, where Lar has been before and remembers how skilled and welcoming the docents were. Sister Heard reminds me of Sedona’s friend, Ems’, older sister: a Nordic maiden with a bright open face and happy demeanor. She explains the purpose of each room in the diorama, saying that my favorite isn’t done justice here; it’s even lovelier for real. But the pale green space is still pleasing. 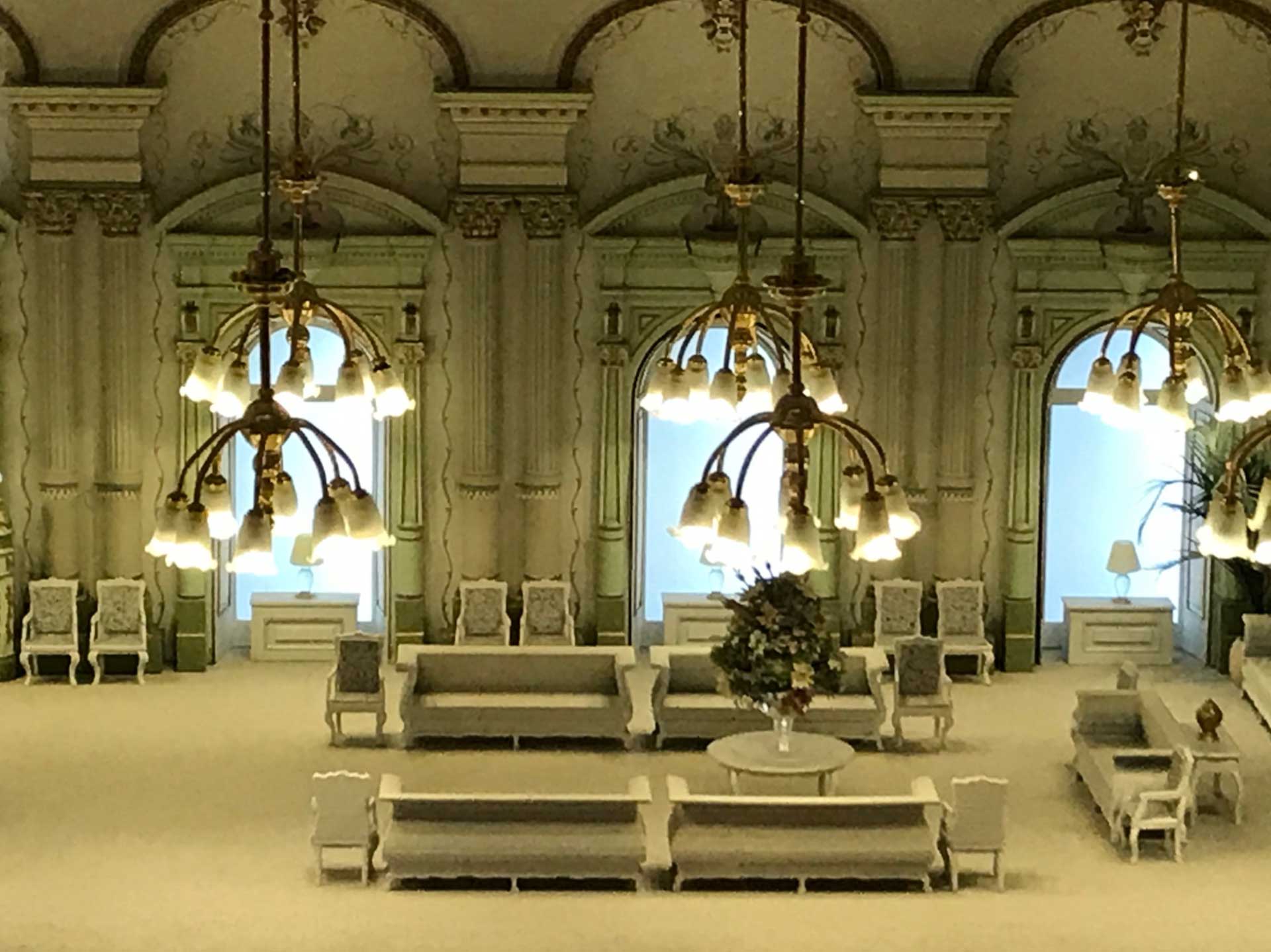 By the time we get through the tabernacle and assembly buildings, it’s between raining and sluicing. We read about the statues of saints and founders, marvel at the gardens, and depart. 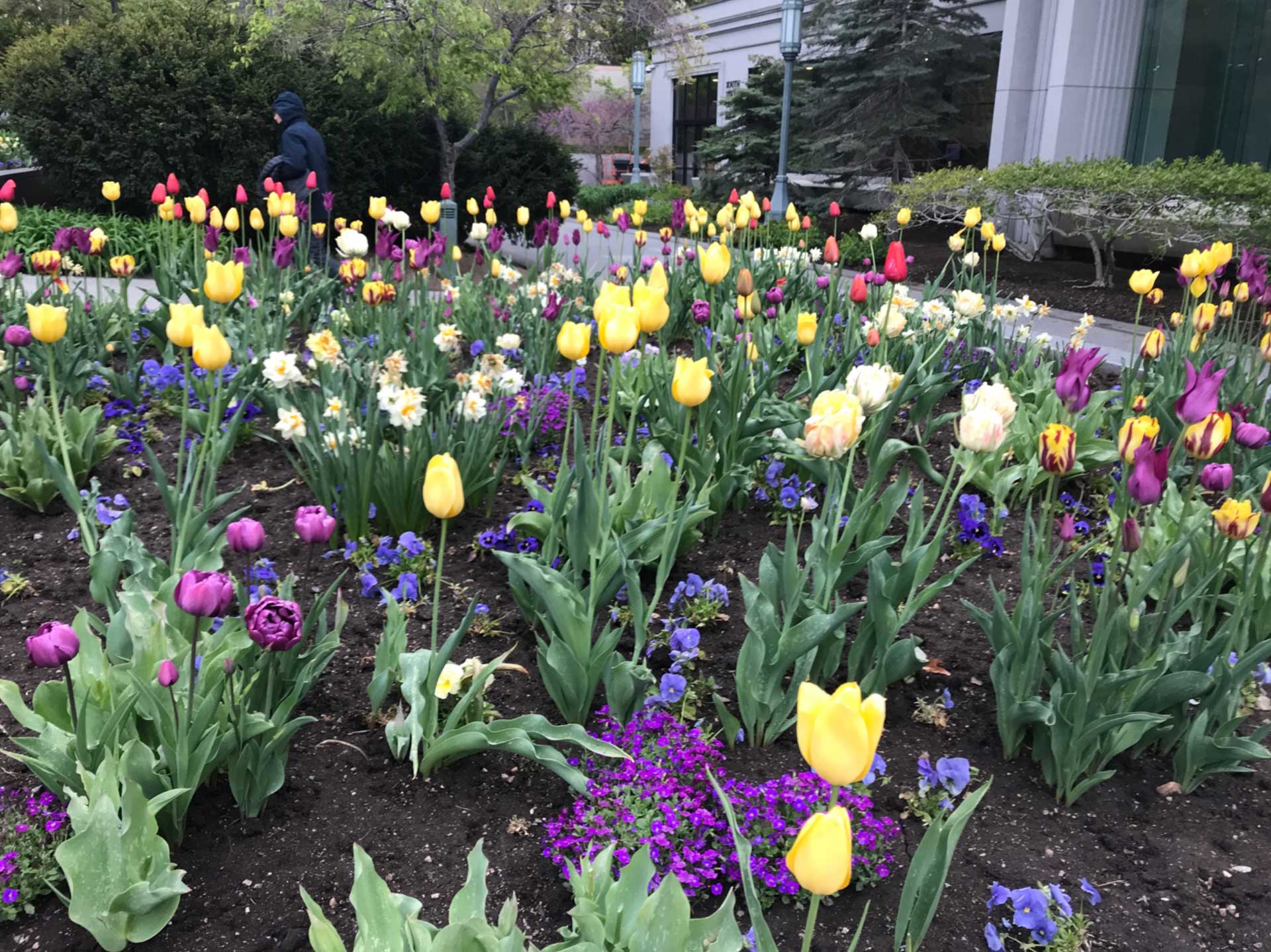 Now it’s just road time to Ogden. All good. But when we arrive and pull to find a hotel online, and a Motel 6 has a $58 rate, AND is only a mile away, AND is on 89 making getting on our way a breeze, I’m hungry but picturing beer and skittles, or so much velvet, as Laurie says. It is not to be.

Check-in goes downhill when the promised in-room coffee turns out to be a myth. It’s not Jennie’s fault but she’s implacable about options. Lobby coffee at six, period.

Then we lug all our stuff in only to find out the computer charger can’t plug into an outlet by the bed. Jennie comes down and offers to move us to a room that smells awful. Nope. I’d wanted to download pictures and eat snacks, not deal with annoying details. I am not my best self. Poor Daddy.

After going back to the lobby yet again it turns out, hey: Jenny can leave a note for the night auditor to start coffee sooner. So simple.

Yeesh. It takes a while to come down and achieve stasis. But eventually, I do, and sleep like a rock from 8:00 p.m. to 3:00 a.m., when even listening to “This American Life” and a set of sleepy songs don’t work. I’m too eager to get up and hang out with y’all. So, I get up dubious about whether said night auditor will have stepped up. He did. I’ve been able to spend one of my favorite hours in life: sipping and sharing what to me is the marvel of travel with wonderful folk.

Thank you. I hope your coffee is equally enjoyable. Today: Yellowstone.

The 89-90 Trip: Canada at Last Is the pandemic changing our dreams? Measuring Loneliness
By posting comments, you agree to our
AZPM encourages comments, but comments that contain profanity, unrelated information, threats, libel, defamatory statements, obscenities, pornography or that violate the law are not allowed. Comments that promote commercial products or services are not allowed. Comments in violation of this policy will be removed. Continued posting of comments that violate this policy will result in the commenter being banned from the site.