Tensions have been simmering between the government and the Las Conchas community, which counts affluent Arizonans among its members. by Murphy Woodhouse, Fronteras Desk TWEET SHARE 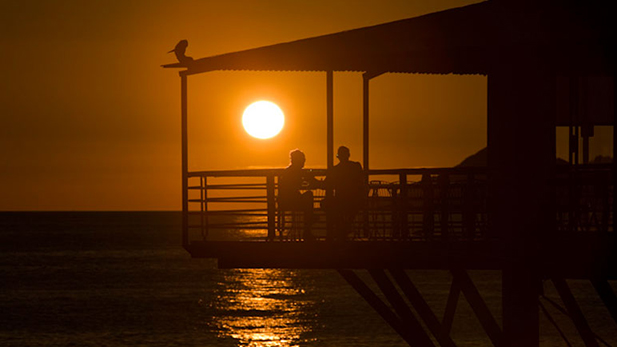 A sunset in Rocky Point, Mexico.
Courtesy of VisitMexico

The Las Conchas community in Rocky Point counts many affluent Arizonans among its roughly 2,000 residents. Tensions between the neighborhood and city government over development plans and other issues had been simmering for some time.

Then last May, the local government tore down the Las Conchas guard house. The HOA saw that as an act of retribution for their refusal to pay $250,000 to a local planning body.

But Rocky Point City Attorney Gabriel Elizondo said that sum was actually a small portion of hundreds of thousands of dollars Las Conchas was illegitimately charging those building new homes there.

“To compensate for the harm done to the city government,” he said of the purpose of the requested $250,000 payment.

As to the guard house, he said it was razed not in retribution, but because it was on a public right of way without a proper permit, which Beauchamp concedes.

But she says the HOA can charge new builders to pay for critical services, like security, road maintenance and a new water system. She and other residents also just want a way back to the peace and quiet that brought them there in the first place.

Rural counties making strides with COVID-19 vaccines Passenger totals plunge at Arizona’s major airports Congressional Dems ask Ducey to explain use of COVID-19 cash
By posting comments, you agree to our
AZPM encourages comments, but comments that contain profanity, unrelated information, threats, libel, defamatory statements, obscenities, pornography or that violate the law are not allowed. Comments that promote commercial products or services are not allowed. Comments in violation of this policy will be removed. Continued posting of comments that violate this policy will result in the commenter being banned from the site.