Their new album 'Slick Machine' documents a season of change for one of the Tucson music scene's most popular bands. by Mark McLemore TWEET SHARE 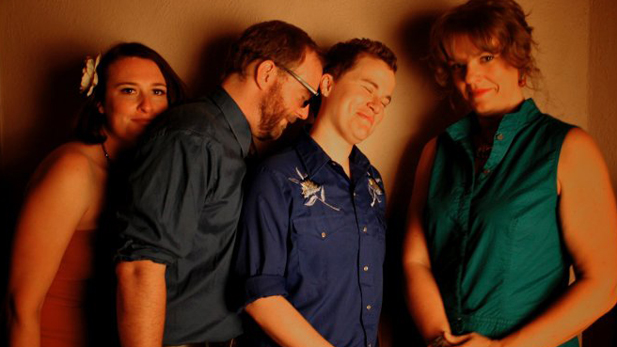 Seashell Radio was / is / will be the quartet of (from left to right) Esmé Schwall, Fen Ikner, Courtney Robbins, and Cassie Van Gelder
Aimee León

Following their 2009 debut, the band Seashell Radio quickly became a fixture in Tucson's downtown music scene. Together, the quartet produces a romantic, sweeping sound that includes classical touches amidst some very complex - and compelling - arrangements.

Seashell Radio's brand new album, Slick Machine, was recorded just as the band faced the prospect of going their separate ways. It was a decision made necessary due to new job opportunities and cross-country moves rather than creative differences, and although they are reuniting for a CD release party at Plush on Friday, March 2nd, the group's long term future seems uncertain.

The two remaining members of Seashell Radio, Fen Ikner and Courtney Robbins, discuss the excitement and the pressure they feel as they prepare for both a CD release party and a new U.S. tour, operating as a duo rather than a quartet...

The great white whale, sighted in Tucson! "The 89-90 Trip" reaches its destination. Finding perspective on race and privilege: "Master Harold"... and the Boys
By posting comments, you agree to our
AZPM encourages comments, but comments that contain profanity, unrelated information, threats, libel, defamatory statements, obscenities, pornography or that violate the law are not allowed. Comments that promote commercial products or services are not allowed. Comments in violation of this policy will be removed. Continued posting of comments that violate this policy will result in the commenter being banned from the site.