Prices around Tucson continue to go up, leaving some unable to buy or going through eviction. by Zachary Ziegler Tweet 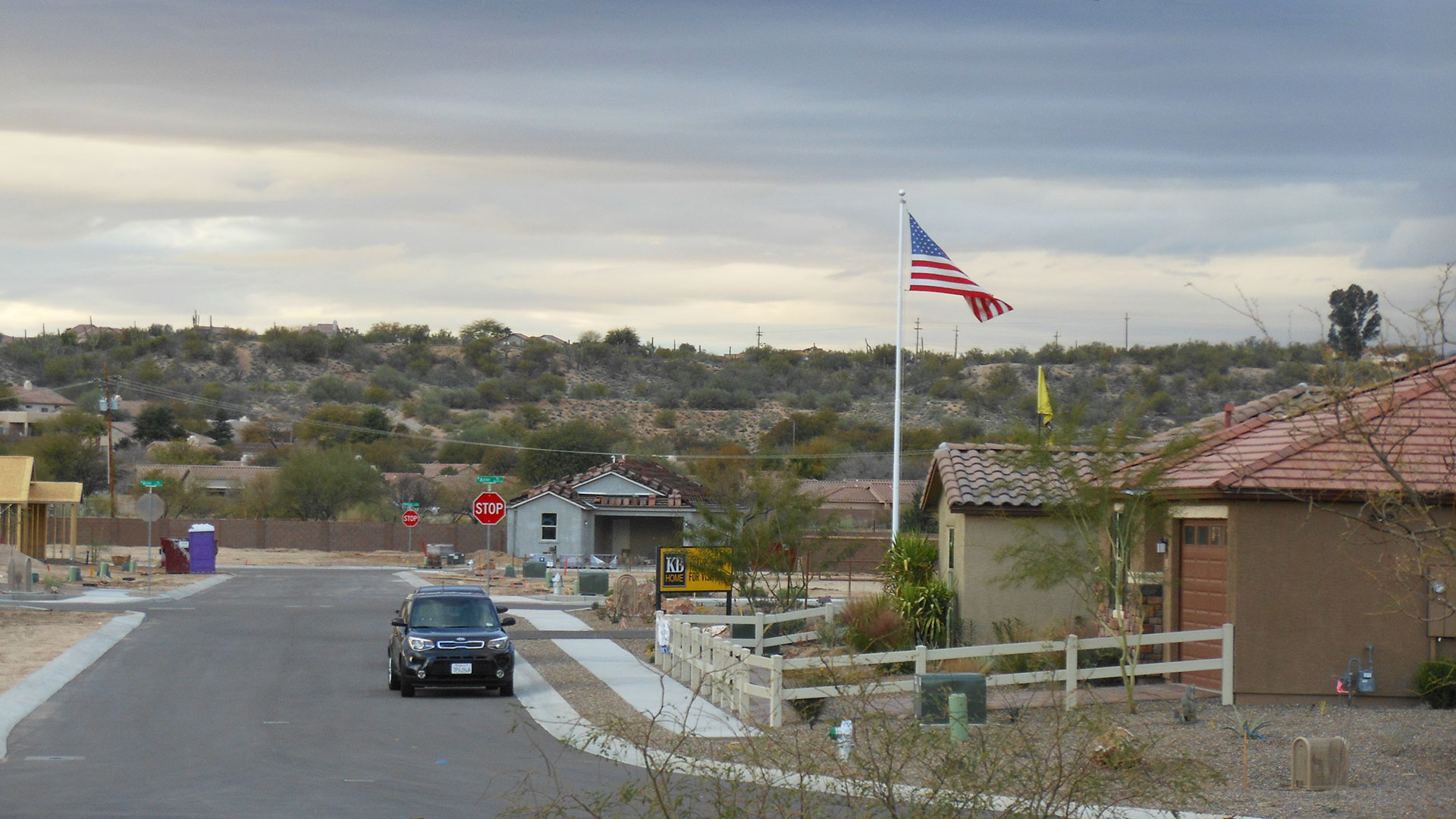 New homes going up in a development in northwest Tucson, February 2018.
C Greer

Housing of all types has gotten pricier in Tucson since the COVID-19 pandemic. On the real estate market, home prices have gone up 50 percent in the past two years, while rents have gone up by a third.

"You're seeing a lot of people who are coming in from out of state, from high-priced places like California," said David Godlewski, president of the Tucson Homebuilders Association. He notes that remote work made the possibility of moving to places that are relatively cheaper by comparison real for many.

The pandemic also caused another population to reconsider how they were living.

"When COVID came to be, a lot of baby boomers that weren't really thinking about retiring chose to retire. That brought an influx of buyers because they could choose to live wherever they wanted," said Jodi Koch, president of the Tucson Association of Realtors and a realtor in Tucson.

But even at that rate, demand continues to outstrip supply, causing prices to continue to go up.

"On its own, that wasn't too huge for a buyer when the interest rate were at three [percent[ back in May 2021. But today with interest rates of approximately 5.99 percent, that's an increase on their mortgage and principal of about $650 a month," Koch said.

Those climbing interest rates may also be having an effect on what new homebuilders are doing.

"Well, I'd definitely say that the housing market is in a state of flux, and when it comes to home building, it's really difficult to project what's going to happen," said Godlewski.

On top of that, another problem continues to plague the industry.

"The supply chain issues have been, I think, by far the biggest impediment to homebuilding in the past 18-24 months. You've seen material prices go through the roof, a lot of that is driven by the lack of availability."

There's also the question of whether the homes that are being built meet the needs of Tucsonans. "There's a term that's become increasingly popular over the past couple of years called the missing middle, and unfortunately I don't think Tucson has done a good job of attracting that kind of development or product. Those are the type of things that we need to address from a policy standpoint as a region," said Godlewski.

That may keep some who would like to own a home in the rental market. But that market is clouded with issues of its own.

"We have virtually no local investors who are putting money into our housing stock and upgrading them," said Tucson City Council Member Steve Kozacheck.

"They're real estate investment trusts, people who are simply pooling money together, without any attachment to the local people. They're putting a little bit of money into them, jacking the rents up, refinancing bases on the new rents, and taking that money that they get in the refi and putting it into another project."

In an upcoming Arizona Illustrated story, producer Cáit NíSíomón examines the recent purchase of the Monterrey Garden Apartment Complex by Northstar Management and Consulting, and a slew of evictions that followed.

"We have people coming here and buying the historically cheap real estate and raising rents as much as they want," NíSíomón said.

Residents who received eviction notices included a couple who were finalizing rental assistance from a city program. That assistance would have covered back rent and three months of future rent.

"We're seeing a big displacement of families that are at the lower end of the income spectrum," Liz Morales, Director of Tucson's Housing and Community Development Department told Arizona Illustrated.

"And some of them do have stable income. But just not enough to pay the rents that many of the landlords are asking for right now."

NíSíomón said that, over the course of her reporting, she found that many landlords said they preferred not to work with housing assistance programs such as the federal Section Eight vouchers, and those vouchers often came up short.

"[Landlords] complain about federal bureaucracy and slow payments, plus they can get more money so they proceed with evictions," she said.

That leaves renters homeless with a blemished rental history and little-to-no recourse.

"There are organizations like the Tucson Tenants Union that people are finding some empowerment through."

Arizona Illustrated reached out to Northstar Management and Consulting multiple times, but calls for comment were not returned.

Report: Home affordability an issue in Pima County, across Arizona Foreclosures in AZ up but still well below pre-pandemic normals What will Arizona do as its share of Colorado River water diminishes?
By posting comments, you agree to our
AZPM encourages comments, but comments that contain profanity, unrelated information, threats, libel, defamatory statements, obscenities, pornography or that violate the law are not allowed. Comments that promote commercial products or services are not allowed. Comments in violation of this policy will be removed. Continued posting of comments that violate this policy will result in the commenter being banned from the site.