‘All I can do is wait’: Children make up a third of migrants in documentation limbo 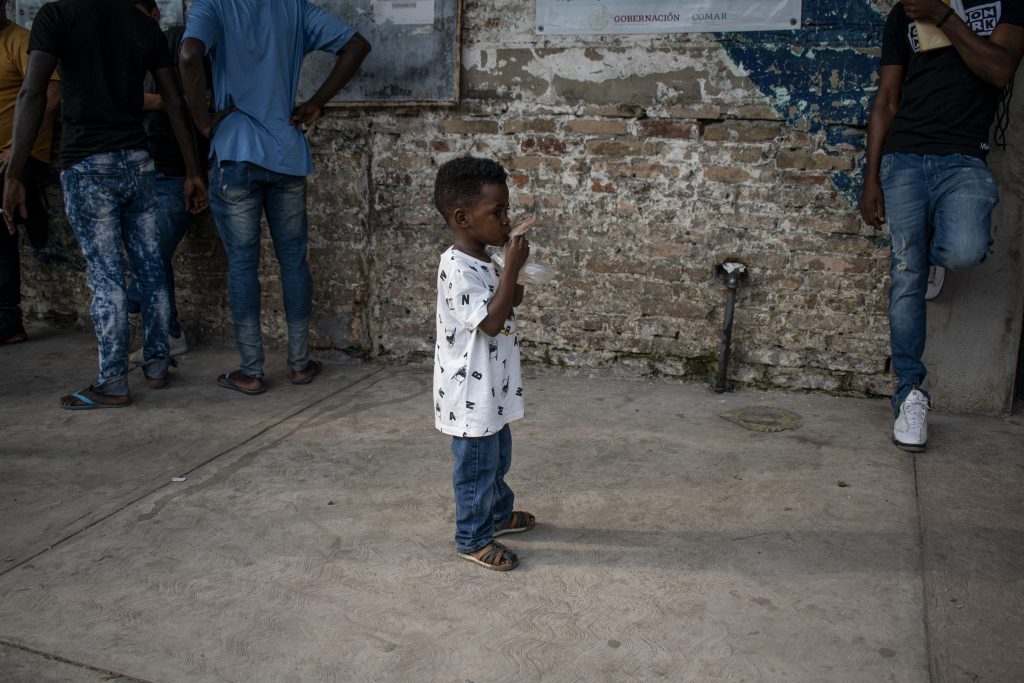 A young boy lines up with his family outside the refugee assistance office in Tapachula, Mexico, on March 9, 2022. Later in the day, a protest erupted outside the office, with dozens of migrants demanding their paperwork be expedited.
Juliette Rihl/Cronkite Borderlands Project

Around the world, millions of people are leaving their homes to seek refuge or asylum in safer, more prosperous countries. From Syria and Ukraine to Venezuela and Haiti, about 82.4 million people who have been forcibly displaced must leave everything they’ve known to seek a better life.

Tens of thousands of them end up in Tapachula, an ancient city of 350,000 people less than 20 miles from Mexico’s border with Guatemala. It’s also more than 2,000 miles from Nogales, Sonora, on the U.S. border.

Tapachula is a gateway into Mexico for thousands of migrants moving north every year. Many have plans to reach the U.S., but all have to wait in Tapachula for Mexican immigration offices to process their requests for documents to work in the country or leave the city.

The crush of migrants and refugees is overwhelming the immigration system, so it often takes months to get the necessary appointments with them. While the process grinds on, public parks are sleeping grounds, local shelters are at capacity and tensions seem only to rise. 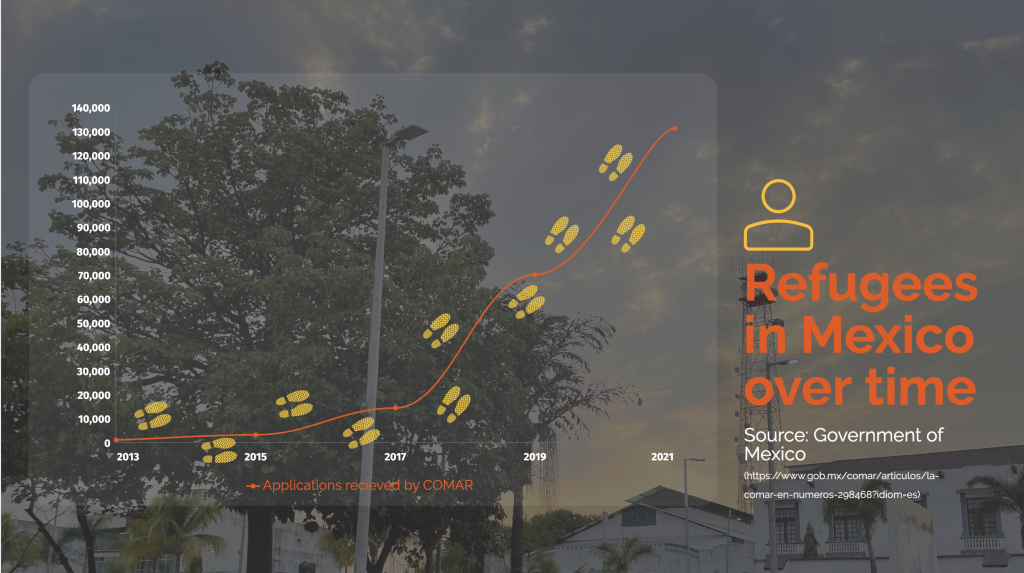 In Tapachula, the site of one of the largest humanitarian crises in the Western Hemisphere, about a third of those stranded are younger than 18, according to UNICEF.

Some kids traveling with parents or older family members are able to find space in one of the city’s shelters.

(To protect identities, everyone in this story will be referred to by first name only).

Carlos, 16, who’s from Honduras, is one of those fortunate enough to have a place to stay. In March, Carlos had been in Tapachula for a little more than a week, traveling with his 23-year-old cousin to join Carlos’ parents and sisters in Puebla, Mexico, further north.

“My case has been difficult, it was sudden, but with God’s help I’ve kept going,” he said.

Carlos spends his days at Hospitalidad y Solidaridad, a shelter for refugees and asylum seekers. He and his cousin walked from Honduras through Guatemala to Mexico in a day and a half.

“Two or three days ago, I had an anxiety attack or depression because I hadn’t had time to process everything that had happened,” he said. “Then it hit me; running out and not being like a locked up prisoner. But now, thank God, I have calmed down, and I have no choice but to come here … and because of the circumstances, I can’t return” to Honduras.

His parents and sisters, who had left home eight or nine months earlier to get permanent residence and documentation, also passed through Hospitalidad y Solidaridad on the way. At a picnic table outside the shelter, Carlos talked about what brought him here.

“Gang threats,” he said. “My dad apparently had problems with them, but it had been mostly because of misunderstandings. … And I had no choice but to come here to look for my dad.”

Directors at the shelter said Carlos’ father must come to Tapachula from Puebla to go through a formal family reunification process with immigration officials. 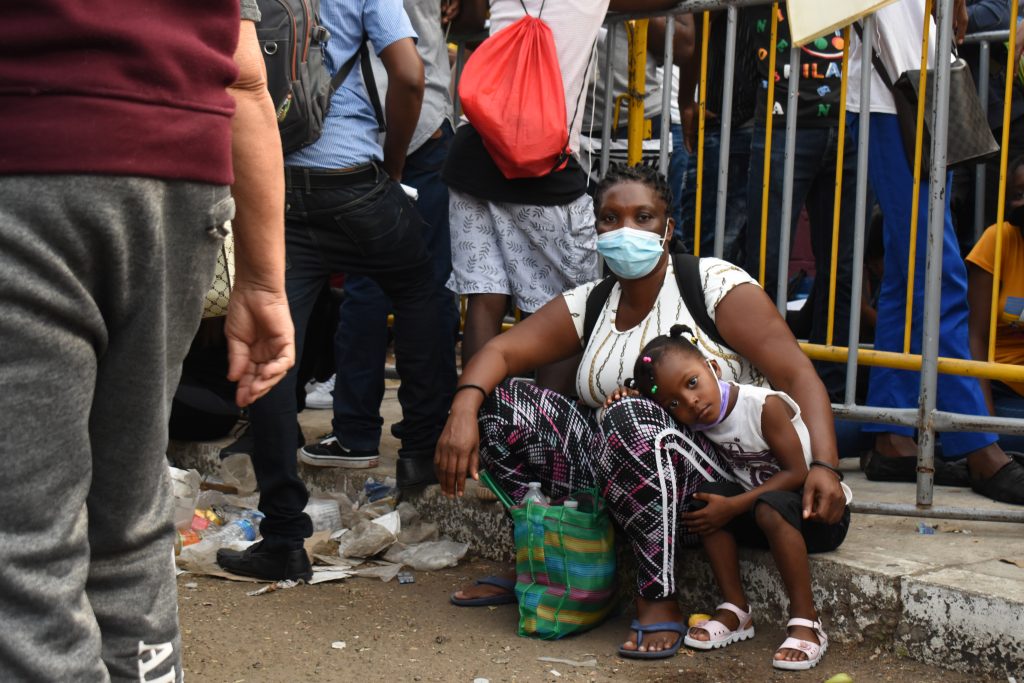 Migrants wait at dawn outside the immigration office in Tapachula, Mexico, on March 8, 2022. Obtaining the necessary paperwork to move freely throughout Mexico can take weeks or months.
Juliette Rihl/Cronkite Borderlands Project

In 2021, Tapachula reported receiving more than 130,000 asylum seekers. The monthly number of refugee-status applications received by COMAR, the Mexican office for refugee assistance, went from about 6,000 in 2019 to almost 11,000 in 2021.

A large number of migrants stuck here are from Haiti. Some left their Caribbean nation recently, but many had worked in Brazil, Colombia, Chile, and Venezuela over the past decade. In 2019, COMAR reported that less than 10% of asylum seekers were Haitian. By 2021, 51,000 Haitians were seeking asylum, making up nearly 40% of all such applicants in Mexico. 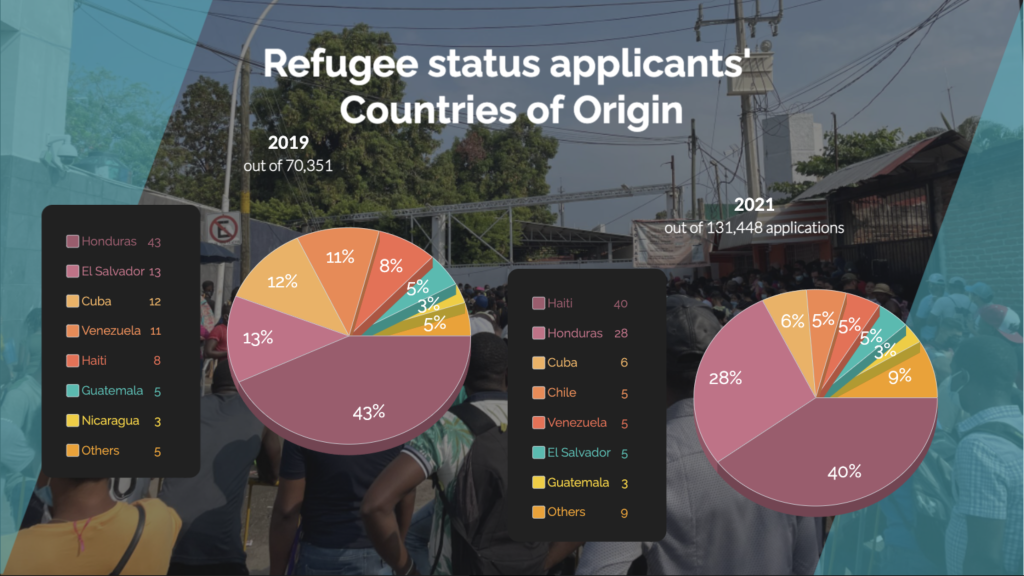 All migrants, but especially Haitian migrants, say it has been extremely difficult waiting in Tapachula for weeks, sometimes months, to get permission to stay and work in Mexico or continue to the U.S. or Canada.

“They sell us everything more expensive,” said Freddy, 42, a Haitian migrant who arrived in August 2021. “Even the house, the apartment. The rent is much more expensive because you’re a migrant.”

Freddy is one of two Creole translators working in Tapachula to help others through the Mexican immigration process.

“Most of them, you know, have been here for eight months, one year, so if you have no documents, you are not able to go to school, to get proper health care, you have nothing,” he said. “It’s like they tell you here: You are not a person.”

For parents of young kids, Freddy said, securing a safe place to sleep or even finding their next meal are daily challenges. And enrolling in school isn’t an option until their documents are in order.

“Not even 5% of migrant kids go to school,” Freddy said.

Haiti has seen more than its share of political and environmental disasters in the past year, including the assassination of Prime Minister Jovenel Moïse and an enormous earthquake, quickly followed by tropical storm Grace. An earlier wave of Haitian migration to South America was spurred by a 2010 earthquake that displaced more than 1.5 million people.

Officials in Tapachula defended the government’s treatment of Black migrants. They said the system is simply overwhelmed and lacks resources, including Creole translators.

Last November, the Mexican government held a conference on the mistreatment of migrants, sponsored by COMAR, in which it denounced racism and xenophobia aimed at migrants.

“People in transit have historically faced prejudices and stigmas that have caused the normalization of false beliefs that are an attempt to justify them receiving unequal treatment and injustice,” the commission said in a news release. “Their vulnerable situation increases because of the language and attitudes of xenophobia that they experience in this country.”

The news release said the government, and COMAR specifically, is committed to eradicating stereotypes, prejudices, and stigmas against migrants – through training and education.

In mid-July, COMAR official Cinthia Perez Trejo told Cronkite News in an email there is “no difference in treatment” for migrants seeking refugee status. Perez noted “procedures within the office of the Secretary of Governance of Mexico for sanctioning any public official who commits such acts.”

The U.N. High Commissioner for Refugees (UNHCR) provides legal aid and other resources to some migrants, depending on their vulnerability. That office has said it is adding Creole interpreters, scheduling and facilitating appointments with COMAR, and building a labor integration program to alleviate some of the pressure.

We’re sitting in the small chapel outside Casa del Migrante Scalabrini Albergue Belén, a shelter that has exceeded its 150-bed capacity. It’s midday, and cots are strewn about the chapel floor and backpacks full of clothes fill the pews. Several families sit under the chapel roof in the rain.

Nati, 28, of Haiti, has been in Tapachula for nine months awaiting documents. She and her family were denied humanitarian visas in December and had to start the application process over again. Those visas would have cleared them for travel through Mexico.

“When a Black person goes to get help, they don’t give it to you, and if you’re white, they do give it. I’ve asked UNHCR for help three times, all three times they’ve told me no.”

Nati, her husband, Panchi, and 2-year-old daughter Ana spent two years in Brazil before traversing the Darién Gap, the extremely dangerous jungle between Colombia in South America and Panama in Central America.

“We encountered many things, a lot of danger to get here,” she said. “In all the countries it was hard, but here it is the most difficult – everything takes longer. … This country has been the hardest. We have passed through ten countries and had the most difficulty here in Mexico. They (children) don’t understand that to get here we have come far, we have been in the jungle, in the rain, risked our lives – they don’t understand this.”

Nati and her family want to make it to Tijuana, south of San Diego, but all they’ve been able to do is wait and watch as others, mostly Central Americans, pass through the shelter.

“When you’re here you have to wait, appeal a case for another year – that’s going to be two years, and wait a year just to be told no. … It’s unfair,” she said.

In March, President Andres Manuel Lopez Obrador (known by his initials AMLO) visited Tapachula. As a couple of hundred migrants protested outside the news conference tent, AMLO presented a plan to address the crisis by stimulating the economies of the countries of origin. An immediate solution to the mass of refugees sleeping in public parks wasn’t mentioned.

AMLO did commit to giving out 950 humanitarian visas to refugees (a status that takes months to achieve), but the National Institute of Migration and the U.N.’s humanitarian aid offices continue to draw crowds by the early hours of the morning, as thousands of refugees demand action. 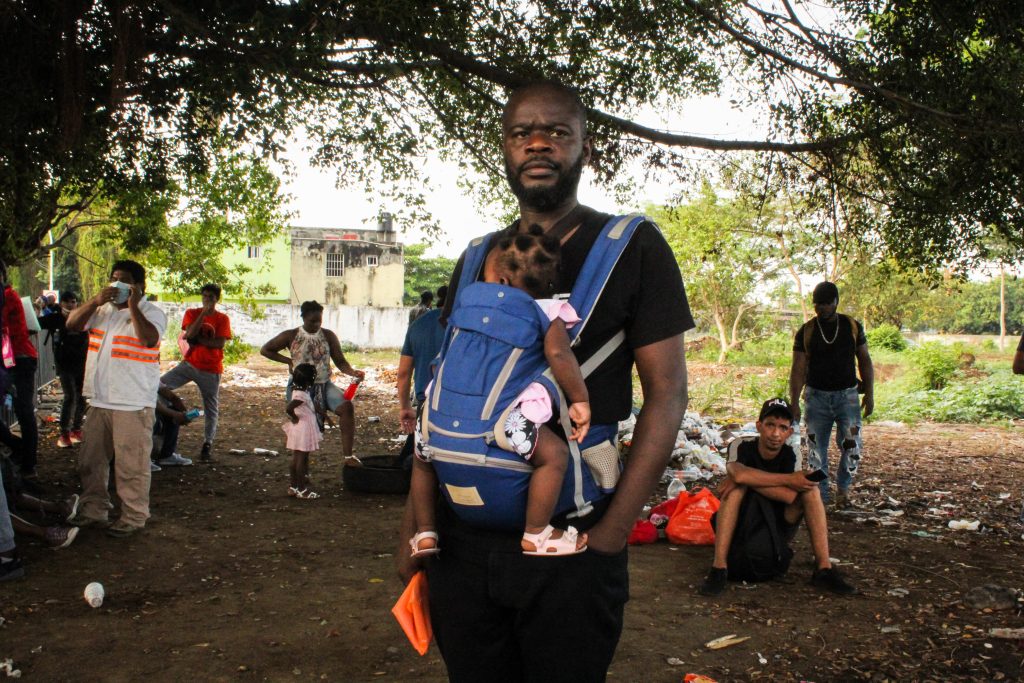 All remain without work or clearance to leave the city; otherwise, they could be arrested and detained. Nati said she’s left with no options.

“All I can do is wait, and wait for them to give me another result,” she said.

Freddy said he and other Haitian refugees will be continuing to work together over the next few years to help one another to navigate daily challenges and parents detained at the migrant detention center known as Siglo XXI.

“We don’t want kids keep leaving on (their) own because a parent (is) in jail in Siglo XXI, we want kids able to go to school, so somehow we have to keep fighting,” he said.

Carlos said he’s hopeful for his future, with more opportunities for education in Tapachula than in Honduras. The shelter where he stays has a minischool with a teacher who teaches kids and adults throughout the week.

“Personally, my goal is, first of all, to be with my parents. Second, finish the school cycle, go to high school and then study a trade,” Carlos said.

Until he reunites with his father, he’ll be in his room.

“In my opinion,” he said, “it is better to know people from afar. That is, to see them and how they behave. See them as they are and not interact so much with them. Because in my experience, in my life, I have had quite a few people who have hurt me.”

Despite stacked odds and untenable delays, young adults and child migrants in Tapachula have no choice but to remain resilient, still waiting and hoping to make it out of the city.

Tale of two borders Migrant deaths declined as encounters rose State of unease: Colorado basin tribes without water rights
By posting comments, you agree to our
AZPM encourages comments, but comments that contain profanity, unrelated information, threats, libel, defamatory statements, obscenities, pornography or that violate the law are not allowed. Comments that promote commercial products or services are not allowed. Comments in violation of this policy will be removed. Continued posting of comments that violate this policy will result in the commenter being banned from the site.