It has made its way into the mental and behavioral health field as a supporting tool in addiction recovery. by Mikenzie Hammel, Cronkite News Tweet 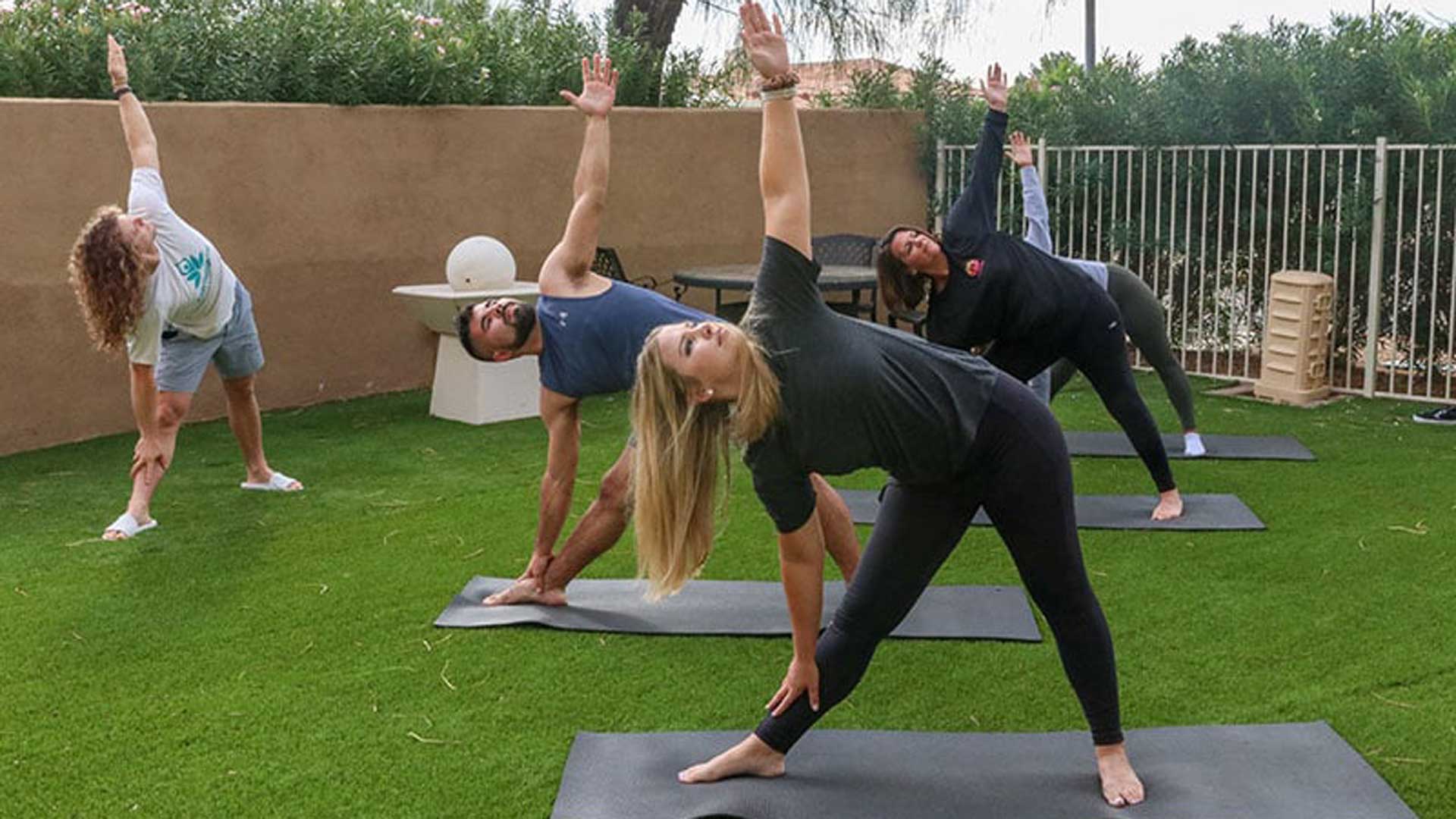 You wouldn’t know it now, but Jacob Daffner struggled with drug and alcohol addiction for more than a decade, from adolescent to young adult.

Daffner, 32, now is a certified yoga instructor who teaches specialized classes to people struggling with substance abuse at his own studio, Spiritually Fit, and 13 rehabilitation clinics in metro Phoenix.

Daffner said his recovery process was long, trying many times to get clean and never feeling fully prepared. But nearly nine years ago, something clicked when he began practicing yoga regularly in an inpatient treatment facility.

“What I didn’t like about (yoga) when I first got started but was really grateful for down the road, is that it was mandatory,” he said. “I was kind of at the end of my rope, so to speak, and was just like, ‘Whatever, this is kind of stupid, but I’ll try it. At this point, if anything can help me not go back to the way I was living, I’ll give it a shot.’”

Yoga was a new and confusing concept, but Daffner had no doubt that he loved the way he felt after a class.

Coming full circle, Daffner teaches yoga at such places as Scottsdale Recovery Center in hopes of helping others on their journeys to sobriety.

Over the decades, yoga has become increasingly popular in the U.S., according to the Centers for Disease Control and Prevention’s National Center for Health Statistics report. The trend is marked by a booming market for yoga attire, popularized by celebrities and such brands as Lululemon and Fabletics, and yoga-inspired home decor sold across the nation.

But even more recently, yoga has made its way into the mental and behavioral health field as a supporting tool in addiction recovery.

Scottsdale Recovery Center is one rehabilitation clinic that offers inpatient, outpatient and residential care services, and it uses yoga as an integral part of its treatment programs.

CEO Lee Yaiva, a recovering drug addict and alcoholic, said the goal is to one day get to a position where the center’s doors are closed because “everybody is well, everybody is healthy, sober and living the life they’re intended to live.”

Overdose deaths shot up by over 30% from 2019 to 2020. Studies show the COVID-19 pandemic made mental health worse across the nation, including for those with substance abuse disorders.

“I think it’s a really important part to establish full dimensional wellness,” Yaiva said, noting that Scottsdale Recovery Center began offering yoga in its treatment program roughly four years ago. “And I think yoga, especially with Jacob and Spiritually Fit, is a much-needed component that has finally introduced itself to the recovery modalities.”

Practicing yoga on a regular basis helps with more than just flexibility.

According to American Addiction Centers, yoga encourages people to eat better and improves the quality of sleep that may be disrupted by drug or alcohol withdrawal symptoms.

Some of those symptoms might show in the form of post-acute withdrawal syndrome, or PAWS. Many recovering addicts experience the disorder months after substance abuse stops, where they may show signs of irritability, depression, anxiety, and drug cravings.

At the micro level, yoga activates the parasympathetic nervous system which helps calm the body’s fight or flight response. It does this by increasing levels of the neurotransmitter gamma-aminobutyric acid, which helps boost mood and decrease stress, ​​according to a study published in the World Journal of Yoga, Physical Therapy and Rehabilitation.

Daffner said that in the time he’s been involved in the treatment process, as a patient, and as an instructor, yoga has taken off in treatment programs.

“Yoga was like some places did it; behavioral health centers and addiction recovery facilities and therapists would recommend it,” Daffner said. “Fast forward eight, nine years, and you can’t find a place without it.”

John Kingsley is a California yoga instructor with a master’s degree in yoga studies from Loyola Mount University who also struggled with substance abuse. He said he’s no stranger to the commercialization of yoga, as there are “two yoga studios and a sushi place in every strip mall in Encinitas.”

Kingsley teaches at the California State Prison in Lancaster and believes yoga is great for many things – including substance abuse recovery – but he said it shouldn’t be overprescribed as a one-size-fits-all treatment for addiction.

“It’s become more part of the everyday culture than it ever has,” Kingsley said. “I just think we need to be careful that we don’t get too locked into wanting it to be the end-all. And that’s something I see a lot.”

Daffner agrees that yoga as a supplemental treatment method during the recovery process is key, as every patient requires unique care.

“The people that get committed to stuff that works while they’re in treatment and continue to do it when they leave, whatever that might be, so like yoga, for instance, they tend to stay sober longer.”

Children see unusual rise in respiratory virus Three years on, COVID-19 no longer grabs headlines, still poses a threat Phoenix nursery provides model solution for newborns exposed to opioids
By posting comments, you agree to our
AZPM encourages comments, but comments that contain profanity, unrelated information, threats, libel, defamatory statements, obscenities, pornography or that violate the law are not allowed. Comments that promote commercial products or services are not allowed. Comments in violation of this policy will be removed. Continued posting of comments that violate this policy will result in the commenter being banned from the site.