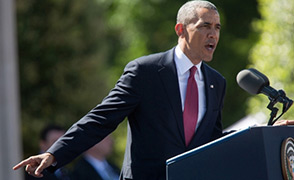 More than 400 registered Latino voters participated in phone interviews over the course of three days, starting on the eve of the president’s announcement.

"This was support that was really found across all different demographic subgroups," said Matt Barreto, co-founder of Latino Decisions, a political opinion research firm, which conducted the poll.

Barreto said Immigration reform is a non-partisan issue for Latino voters. Eighty percent of Latinos in the poll say they would oppose Republican efforts to block executive action.

Poll: Arizonans Still See Illegal Immigration as Major Problem AZ WEEK: Arizona Joins Lawsuit Against Obama Over Immigration Action Arizona Signs onto Challenge of Obama's Immigration Policy
By posting comments, you agree to our
AZPM encourages comments, but comments that contain profanity, unrelated information, threats, libel, defamatory statements, obscenities, pornography or that violate the law are not allowed. Comments that promote commercial products or services are not allowed. Comments in violation of this policy will be removed. Continued posting of comments that violate this policy will result in the commenter being banned from the site.