Astronaut’s Son in Search of Moon Trees Planted by Father 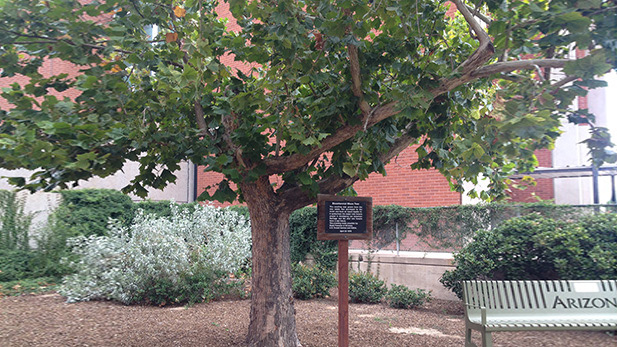 An American sycamore tree that grew from seeds flown to the Moon on Apollo 14 has stood next to the University of Arizona's Kuiper Space Sciences Building since April 1976.
AZPM photo

Listen to the extended interview with Jack Roosa

Jack Roosa had anything but a typical childhood. In the Houston area where he lived in the 1960s, among his playmates were the Armstrong, Aldrin and Shepard kids.

Most everyone in the neighborhood was working for NASA.

Roosa’s father, Stuart, was the command module pilot for Apollo 14, and among his accomplishments aboard that scientifically focused mission was caring for 500 tree seeds that orbited the Moon in early 1971. The seeds were germinated when they returned to Earth, and many of the seedlings were planted around the country in 1976 as “Moon Trees.”

An American sycamore tree cultivated from those seeds stands on the University of Arizona campus between the Flandrau Science Center and the Kuiper Space Sciences Building.

Roosa said his father had been an Air Force test pilot before admission to NASA’s astronaut corps. He and his siblings were used to having their dad away from home for stretches at a time. 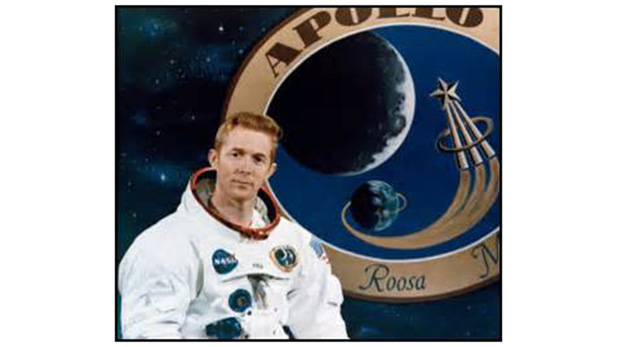 As the Apollo 14 launch date drew near, activity picked up. Joan Roosa schooled her children in manners and being ready for the onslaught of media attention.

Jack Roosa recalls going to Kennedy Space Center to watch his father blast off into space. The astronaut families sat together two and a half miles from the launch pad, close to the giant countdown clock. He can still recount the feeling and sound of the 7.5 million pounds of thrust of the Saturn V rocket that powered the astronauts into space.

“I’d never felt something that powerful in my life, nor since,” Roosa said.

Roosa said he went to Cape Canaveral for the Apollo 7 and 11 launches as well. At the Apollo 11 launch, which sent the first crew to land on the Moon in 1969, Roosa got to meet his childhood hero Charles Lindbergh.

While their father was orbiting the Moon, the family monitored live transmissions between Mission Control in Houston and the spacecraft via a “squawk box” that was in their mother’s bedroom.

“I could hear Mission Control talking to my dad and Alan Shepard and Ed Mitchell and then the responses coming back. It was really neat to be able to understand that your father is hundreds of thousands of mile away and you can year his voice,” Roosa said.

Roosa said he is eager to learn more about the Moon Tree program, starting in Tucson. He doesn’t know if his father attended the planting and hopes someone at the Moon Tree ceremony might have been present for the 1976 event and can offer details. Stuart Roosa did travel around the country during the bicentennial year helping to plant the trees from the seeds he carried to the Moon. 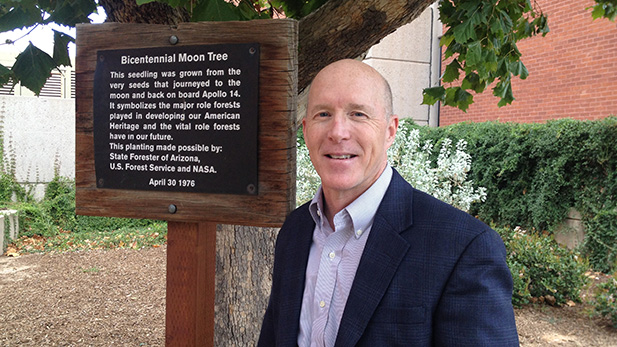 'Rise of the Rocket Girls' Chronicles Contribution of NASA Women UA Graduate Sets Sights High in the Sky: Science in Space Tucsonans: Plan for Summer Heat by Planting Trees Now
By posting comments, you agree to our
AZPM encourages comments, but comments that contain profanity, unrelated information, threats, libel, defamatory statements, obscenities, pornography or that violate the law are not allowed. Comments that promote commercial products or services are not allowed. Comments in violation of this policy will be removed. Continued posting of comments that violate this policy will result in the commenter being banned from the site.