A Walking Meditation in Sunday's All Souls Procession

"People live as if they've got all the time in the world and death happens to other people, and this teaching is to wake us up so we can appreciate what we have while we have it." by Vanessa Barchfield TWEET SHARE 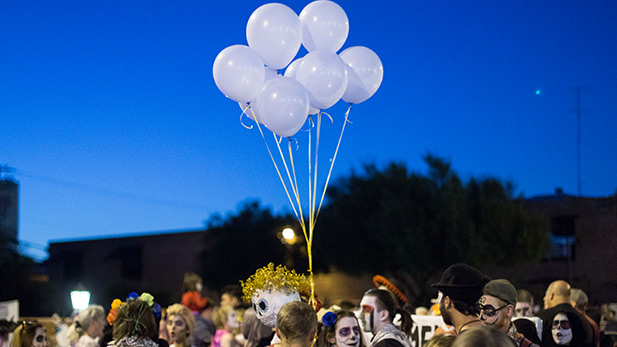 Tens of thousands of marchers, their faces painted as sugar skulls, will take part in Tucson's annual All Souls Procession this Sunday. Among them will be Mexican mariachis, Scottish bagpipe players, Japanese drummers - and members of a Buddhist organization, marching together as a group for the first time.

The Empty Mountain Sangha will be doing a walking mediation, but they won't be silent; they will make the procession as they chant in Korean.

"It's a mantra chant that honors Gwanse-eum, and her name literally means the hearer of the world's cries," said Frank Jude Boccio."My Korean Dharma name is Poep Sa, which means teacher."

Boccio started the meditation group in his living room more than seven years ago. As their numbers grew, they began practicing in the Tucson Yoga Studios and last year the Empty Mountain Sangha moved into its own space on 4th Avenue.

"Sangha is a Sanskrit word that means community," Boccio said.

"There's a diversity of beliefs [in the sangha]. The only thing we share is the value of wanting to be more awake in our lives, more intimate with our experience of life," said Boccio.

They use meditation as a means of becoming more present.

"I think a lot of people have the idea that meditation is not thinking, that the objective is to stop your mind from thinking, and fortunately that's not the case because we really can't do that," said member Nancy Hand.

The point, Boccio said, is to notice when the mind has wandered.

Boccio and other members of the sangha want to covey a message at All Souls.

"I will be marching to carry this idea of impermanence," said Hand.

"Many of the times we're so lost in our thoughts that we're missing what's really happening.”
- Frank Jude Boccio

The fleeting nature of everything in life is a main tenant of Buddhism. The group will carry signs that bear this message and the religion's five remembrances:

All beings are of the nature to age, there's no way to avoid aging.

All beings are of the nature to experience illness, there's no way to avoid experiencing illness.

All beings are of the nature to die, there's no way to avoid death.

All that we love, everything that we hold dear is of the nature to change, there's no way to avoid becoming separated from them.

Our actions are the ground on which we stand, there's no way to avoid the consequences of our actions

Members of the group say the signs are not meant to be macabre, but to motivate people to value and appreciate every moment of this life.

The Empty Mountain Sangha's meditation practices are open to the public. They meet Sundays at 5:30 p.m. and Wednesdays at 6:30 p.m. The Sangha Hall is located at 148 S. 4th Ave.

New Route for Sunday's All Souls Procession Tucson's DeGrazia Gallery Hosts Fiesta de Guadalupe Choosing Death Over Dying: One Arizona Family's Story
By posting comments, you agree to our
AZPM encourages comments, but comments that contain profanity, unrelated information, threats, libel, defamatory statements, obscenities, pornography or that violate the law are not allowed. Comments that promote commercial products or services are not allowed. Comments in violation of this policy will be removed. Continued posting of comments that violate this policy will result in the commenter being banned from the site.