After 30 Years, Fate of Stolen UA Painting Remains a Mystery

Willem de Kooning's Woman Ochre, sliced out of its frame, may be worth up to $160 million. by Vanessa Barchfield TWEET SHARE 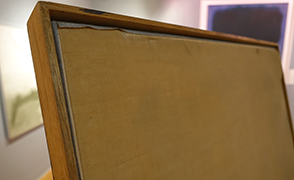 Friday marks a somber anniversary for the University of Arizona Museum of Art. 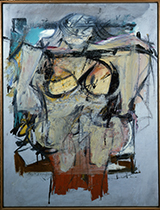 Willem de Kooning, Woman - Ochre, 1954-55, Oil on canvas, Gift of Edward Joseph Gallagher, Jr. (PHOTO: University of Arizona Museum of Art)
On the day after Thanksgiving, 1985, a man and woman walked into the museum as visitors, sliced one of the institution's most valuable paintings out of its frame, tucked it away, and zoomed off in a rust colored sports car before anyone had noticed what they'd done.

The painting was Woman Ochre by the abstract expressionist master Willem de Kooning. Museum officials estimate that today it could be worth up to $160 million dollars.

Curator Olivia Miller said that figure is based on how much de Kooning’s paintings have been selling for at auction, but in a way, its monetary value is meaningless.

"As a museum we would never sell the painting, it’s here for the public good," she said.

Unfortunately though, it’s not there. What happened to Woman Ochre remains a mystery and the investigation is ongoing.

The museum sometimes puts what’s left of the work on display: an empty frame with the frayed edges of one of the most valuable paintings of the 20th century.

Watch a version of this story that aired on Arizona Illustrated

Man Who Found Stolen Masterpiece Tells His Tale in Tucson De Kooning Painting Found, More Than 30 Years After Heist Yearly Report Shows Drop in Most Crimes on UA Campus
By posting comments, you agree to our
AZPM encourages comments, but comments that contain profanity, unrelated information, threats, libel, defamatory statements, obscenities, pornography or that violate the law are not allowed. Comments that promote commercial products or services are not allowed. Comments in violation of this policy will be removed. Continued posting of comments that violate this policy will result in the commenter being banned from the site.