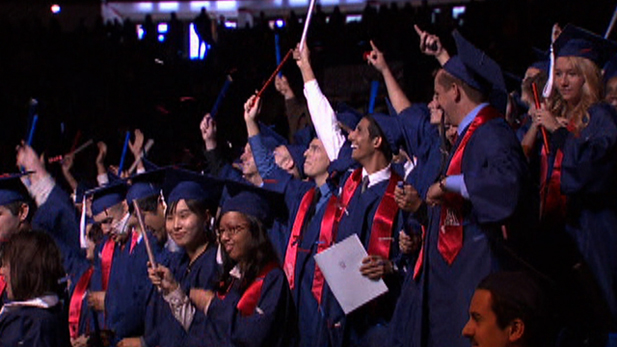 Students celebrate their achievements at a University of Arizona graduation ceremony.
AZPM

Making college or technical degree programs more accessible, and ensuring students graduate, could pump an additional $7 billion into Arizona's economy each year, according to the non-profit group College Success Arizona.

"Arizona has a great opportunity in the next few years," said CEO Rich Nickel. "Forbes says it’s going to be one of the best places for job growth. We’re set up to explode, but only if we can get the people here that can fill those jobs."

The study outlines a number of priority areas.

"Today we only have 70 percent of those who start high school finish. That’s well below the national average. And to be a high performer we need to be closer to 90 percent," he said.

Arizona is one of the only states in the nation without a financial aid program geared to let low-income or first-generation students have better access to college. Creating one would help make education more accessible, said Nickel.

The report stresses the need to close achievement gaps between racial and ethnic groups in Arizona.

Latinos will soon constitute the majority of working age adults in Arizona, but complete postsecondary degrees at lower rates than the state’s white students.

"The state will never reach its goals if it doesn’t raise the attainment rates of its fastest growing population," Nickel said.

Tucsonans Want More School Funding in Governor's Budget Davis-Monthan and Tucson's Economy National Parks Add Millions to Arizona Economy
By posting comments, you agree to our
AZPM encourages comments, but comments that contain profanity, unrelated information, threats, libel, defamatory statements, obscenities, pornography or that violate the law are not allowed. Comments that promote commercial products or services are not allowed. Comments in violation of this policy will be removed. Continued posting of comments that violate this policy will result in the commenter being banned from the site.