Arizona-Mexico Trade Comes in Education, Too 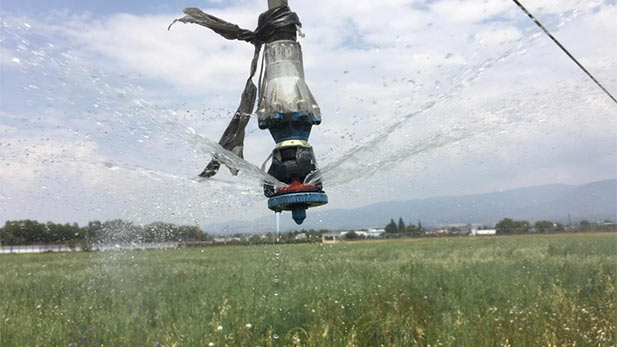 A sprinkler head in a Mexican field developed by students who have done engineering studies in Arizona.
Jorge Valencia, Fronteras Desk

Jose Reyes Sanchez was driving through a farm about an hour outside of Mexico City as he listed the crops: pears, peaches and plums. Reyes, an engineering professor at the Autonomous University of Chapingo, then pointed to one of his favorite parts of the farm: a field of oats with a rotating 24-sprinkler irrigation machine dousing it with hundreds of gallons of water per minute.

"My students just took their final exam," Reyes said. "And they had to get very wet because they had to measure the amount of water that each sprinkler emits."

For years, Reyes has been taking undergraduate seniors on a field trip to California, Nevada and Arizona to learn more about water efficiency, with stops at companies such as the Tempe-based Salt River Project and the University of Arizona in Tucson.

And every year, one or two of Reyes’ students return to the University of Arizona to pursue graduate degrees from the Department of Agricultural and Biosystems Engineering.

Last year, they were part of the 81 graduate students from Mexico who enrolled at Arizona colleges with support from a Mexican government-funded scholarship aimed at boosting the ranks of scientists in their country. (That’s out of a combined graduate student enrollment of more than 20,000 at the University of Arizona, Arizona State University and Northern Arizona University.)

For decades, colleges in Arizona have received a steady stream of Mexican students seeking to complete doctoral degrees in science and math.

Initially, the Mexican government sent them as an effort to boost the number of scientists in that country. But now, Arizona colleges recruit them as one way to keep up their graduate enrollment.

One of the most recent Chapingo graduates to enroll at the University of Arizona is Rocio Guadalupe Reyes Estevez, who recently earned a master’s degree and plans to begin a doctoral degree in the fall.

In Arizona, she has classmates from around the world and free access to countless academic papers through the university library’s website -- just two differences from her studies in Chapingo, Estevez said.

“It was something I realized immediately,” she said. “We have access to a lot more information than I did at Chapingo.”

Don Slack, an engineering professor at the University of Arizona, said Estevez is similar to other Chapingo graduates who have preceded her: "They’re good students."

Slack has been recruiting Chapingo graduates since he met a few professors from that university’s engineering program at a conference in the early 1990s. He’s come to rely on them to complement his department’s doctoral enrollment, which is roughly about 25 every year, Slack said.

For one, Chapingo students are easier to convince then young American engineers, who have good employment prospects straight out of undergrad. Also, top doctoral candidates from Chapingo come with scholarships. The Mexican government’s National Council on Science and Technology spends as much as $30,000 per year to pay for each student’s health care, housing and tuition.

This has been a benefit for the agricultural and biosystems engineering department, Slack said.

"We're able to sustain enrollment in our program at a level that allows us to teach the classes and do the kind of research that we like to do," Slack said.

Which is no surprise to the Mexican government, said Maria Dolores Sanchez Soler, adjunct director for scholarships at the Mexican National Council for Science and Technology.

In the case of the University of Arizona and the Autonomous University of Chapingo, most doctoral degree earners have returned to Mexico.

Rocio Guadalupe Reyes Estevez, the student who plans on beginning work toward her doctoral degree in the fall, said she hopes to eventually teach irrigation engineering in Mexico. She said she wants to help bring up future generations of scientists in her country.

Arizona, Sonora Governors Sign Agreements on Education, Transportation Arizona's Sluggish-Port Reputation Hurting Cross-Border Trade Arizona Medical-Device Companies Search for Inroads to Mexican Market
By posting comments, you agree to our
AZPM encourages comments, but comments that contain profanity, unrelated information, threats, libel, defamatory statements, obscenities, pornography or that violate the law are not allowed. Comments that promote commercial products or services are not allowed. Comments in violation of this policy will be removed. Continued posting of comments that violate this policy will result in the commenter being banned from the site.