Film reviewer Chris Dashiell looks back at a 1991 film with a diverse cast that presents an absurdist view of life in the Southwest. by Mark McLemore TWEET SHARE 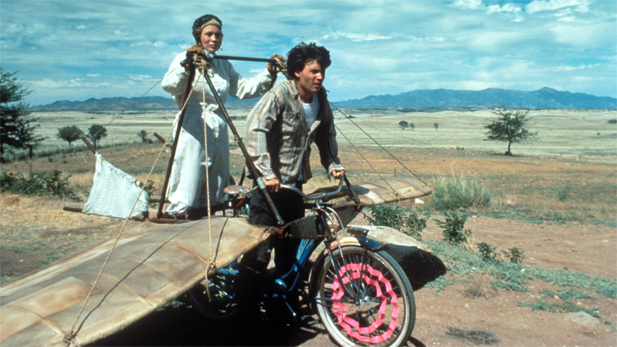 Sometimes, an outsider's viewpoint can reveal things that those on the inside might miss. And, being an outsider also allows an artist to dream about a subject freely, allowing creativity to be the guide instead of reality.

Film reviewer Chris Dashiell looks back at movie that many may have missed when it premiered in 1991, even though it has a big-name cast of stars as diverse as Johnny Depp, Jerry Lewis, Faye Dunaway, Lili Taylor, and Vincent Gallo, and a title that might stand out: Arizona Dream...

The Loft Cinema will be screening Arizona Dream on Sunday, August 12th, 2012 at noon.

How I Learned to Stop Worrying and Love Dr. Strangelove Painting on Shadows - The music of To-Ree-Nee Wolf. Understanding walls: "The barrier that we create in our hearts must be broken to heal and grow".
By posting comments, you agree to our
AZPM encourages comments, but comments that contain profanity, unrelated information, threats, libel, defamatory statements, obscenities, pornography or that violate the law are not allowed. Comments that promote commercial products or services are not allowed. Comments in violation of this policy will be removed. Continued posting of comments that violate this policy will result in the commenter being banned from the site.