× LET'S ALL GO TO THE LOBBY, our new podcast filled with upbeat conversation and recommendations for great movies from across time and around the world.
/ Modified aug 1, 2014 9:33 a.m. 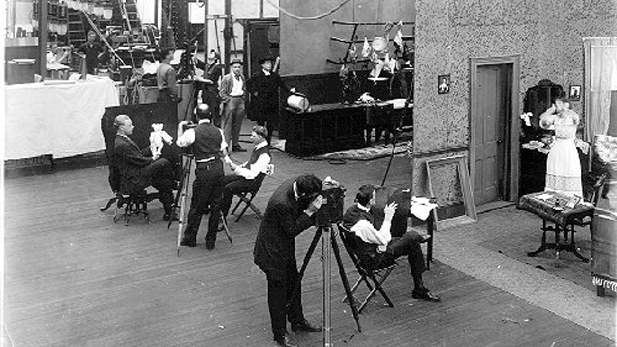 The movies have always been driven by the search for "the next big thing," but have the century-old traditions of the Hollywood studio system done more to help or harm the film industry in the 21st century? Chris Dashiell goes back to the beginning to look for answers, and finds that the movie studio might be considered one of Thomas Edison's most overlooked inventions...

Hollywood movies in the classic era of the 1930s and '40s were created by a remarkable system of film studios that controlled every aspect of the business. To understand how this happened, it helps to go back to the beginnings of American film in the silent days. For the first ten years or so, from the mid-1890s through 1905, the movie business was a wild free-for-all, with scores of entrepreneurs all over the country trying to get a piece of the action by producing or distributing films.

A movie was just one reel then, about 12 to 15 minutes long, and the novelty value of this amazing new form of entertainment was enough for just about any company to make a profit. The pictures were often screened as an added attraction at vaudeville shows, concerts, and other stage productions. Then, in 1905, something new exploded onto the scene: the nickelodeon, a storefront theater showing movies for just a nickel. It was easy for any enterprising business person to set one up, and so many did, that the nationwide demand for films skyrocketed. After the dust had settled from this boom, the three biggest companies, all based in New York City, had taken a dominating position.

First, there was the Edison Company. Thomas Edison didn’t invent the movies, but his company devised the first efficient movie camera, and Edison’s 35-millimeter sprocketed film became the industry standard. The company churned out product at a remarkable pace. Edwin S. Porter, one of the cinema’s early innovators, worked for Edison—1903s' The Great Train Robbery was one of his films. 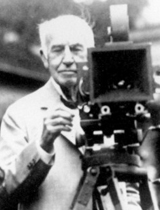 Thomas Edison with a movie camera of his own design

The second big company was Biograph. Biograph overtook Edison to become the most popular and most profitable studio, and that was because of its development of the story film. Audience preferences were shifting away from scenes of real life towards stories, and Biograph was the pioneer in this regard. Its best and most famous director, D.W. Griffith, developed story-telling techniques that were far in advance of anything attempted before. His films were different, more interesting than anyone else’s, and audiences knew it. He successfully expanded film into two reels, but when he tried to go even longer, to what we now think of as a normal feature-length film, the executives at Biograph wouldn’t allow it. In hindsight it seems foolish, but at the time they just couldn’t imagine people sitting still for a film that was longer than a half hour. Griffith left Biograph to become independent, and of course went on to prove them all wrong.

The third big studio was Vitagraph. It was the first to really concentrate on genre films—the western, the comedy, the crime film, and it was also known for using very few intertitles, trying to tell most of the stories by action alone.

In 1907, Edison took a fateful step. He decided to copyright motion pictures. The camera and other equipment, and the very film itself, were declared to be Edison owned and patented. If a company wanted to make films, it had to join an Edison-operated trust, The Motion Picture Patents Company. Most of the other companies fell into line, including, eventually, Biograph and Vitagraph. It was a stranglehold designed to eliminate all the smaller operators, so that the fat cats could have the entire pie to themselves. And for a while, it worked. But many of the minor producers who had made their start with the vaudeville circuit and the nickelodeons, largely Jewish businessmen on the outskirts of the industry, started moving to southern California to try to avoid the legal arm of the Patents Company. 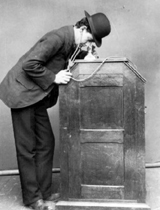 The Los Angeles area had already attracted a few small studios because of its ideal filming conditions—mostly sunny weather year round meant more hours to shoot pictures, and the scenery was perfect for many different kinds of stories. A lot of the mavericks set up shop in a little town with orange groves called Hollywood. The Patents Company sent lawyers and then enforcers to put a stop to these upstart film outfits. Some directors saw their productions actually broken up by gunfire. But then, in 1912, after a long series of legal battles, the Patents Company lost its case in the courts, which ruled that it violated the antitrust laws. The monopoly was over, and the era of Hollywood dominance began. Biograph ceased production in 1916; Edison went under two years later. Vitagraph was the only major patents company that survived and got a foothold in Hollywood. It was eventually absorbed into Warner Brothers. 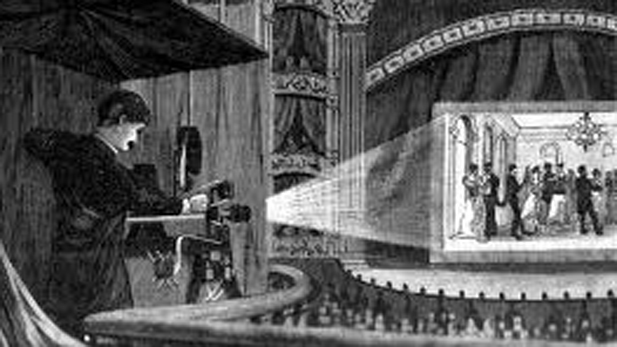 Then there was Jesse Lasky’s outfit, Feature Play. Its top director was Cecil B. DeMille, who made the first feature-length Hollywood film, The Squaw Man, in 1914. Adolph Zukor ran the Famous Players company, specializing in film versions of stage classics. Those two merged to form Famous Players Lasky, which ended up becoming Paramount. William Fox started the company that still bears his name—he made a fortune from westerns with Tom Mix.

Independent Movie Productions, IMP, later called Universal Studios, was owned by Carl Laemmle, and it was the first studio to give credit to a performer in a film, Florence Lawrence, the first star. From then on, stars were the key to promoting films.

The first major star, and in some ways the biggest movie star ever, was Mary Pickford, and she started a pattern of moving from studio to studio demanding, and getting, bigger and bigger salaries as she went. This procedure was imitated by Chaplin and other stars. The money was there to pay them, because by this time, the 1920s, business was booming.

There were many other studios in the silent days, too numerous to mention. The producers held the purse strings, but the creative part was generally the province of the directors, writers, and actors. That all changed with the coming of sound. Next time I present part 2: a crash course in Hollywood studios—their methods, their styles, and their stars.

The Movie Studio System, Part III The Movie Studio System, Part II Tucson Drive-In History
By posting comments, you agree to our
AZPM encourages comments, but comments that contain profanity, unrelated information, threats, libel, defamatory statements, obscenities, pornography or that violate the law are not allowed. Comments that promote commercial products or services are not allowed. Comments in violation of this policy will be removed. Continued posting of comments that violate this policy will result in the commenter being banned from the site.