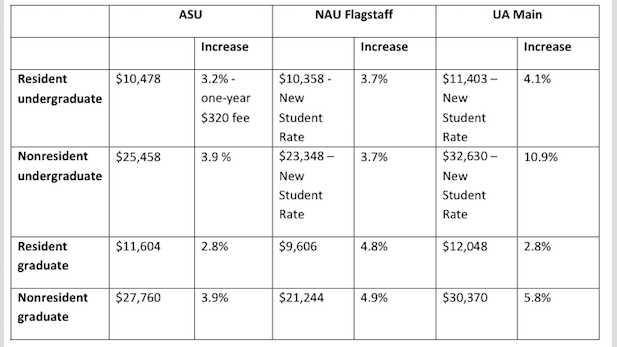 Tuition for incoming freshmen at the University of Arizona will be $11,403, the Arizona Board of Regents decided Monday.

That is a 4.1 percent increase from the current freshman tuition under the UA's tuition guarantee program. That means the tuition will stay the same for four years.

The UA introduced its guaranteed tuition plan this academic year for all incoming freshmen. Upperclassmen were given the chance to opt in, and about 20 percent of the sophomore class did so.

Students who did not opt in will be given a one-time opportunity to change their minds, and they can opt in at the 2014-2015 tuition rate.

Out-of-state freshmen coming to the UA in the fall will pay $32,630, which is 10.9 percent higher than the current rate.

UA officials said the tuition increase will cover less than half of the nearly $28.3 million the school will lose in state funding next fiscal year.

In that same 10 years, state funding of the university system has fallen an estimated $500 million.

The regents approved tuition for all three state universities, sticking with the recommendations of each campus president.

Arizona State University President Michael Crowe promised no tuition increase, and the regents backed him, keeping ASU's undergraduate rate at $10,478 for state residents. ASU will impose a one-time fee of $320 on each undergraduate student next school year, the equivalent of a 3.2 percent tuition increase.

At Northern Arizona University, state resident freshmen will pay $10,358, a 3.7 percent increase from this year's rate.

Board of Regents Begins Tuition Setting Process Friday At UA Law School, Students Can Skip LSAT, Take GRE Instead Three Arizona Teens Named Presidential Scholars
By posting comments, you agree to our
AZPM encourages comments, but comments that contain profanity, unrelated information, threats, libel, defamatory statements, obscenities, pornography or that violate the law are not allowed. Comments that promote commercial products or services are not allowed. Comments in violation of this policy will be removed. Continued posting of comments that violate this policy will result in the commenter being banned from the site.