Stories from Roy Laos Transit Center: Where Do You Come From, and Where Are You Going?

Tucsonans make their way through their days, lives, and intersect at the transit hub on the south side. by Sophia Paliza-Carre Tweet 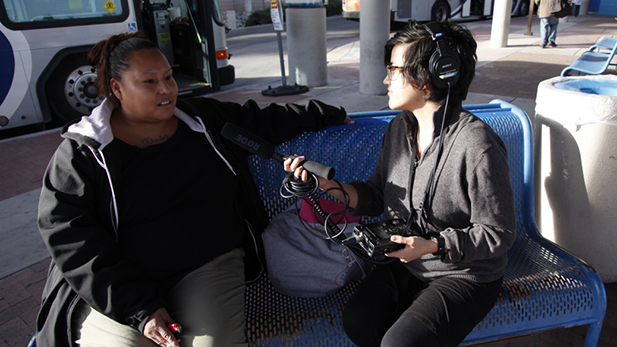 Christina Hamaley talks about her life in Tucson while waiting for a bus at Roy Laos Transit Center. Pictured with producer Sophia Paliza-Carre.
Mariana Dale, AZPM

Arizona Public Media is working on a new project to tell individual stories from this cross-cultural community.

The project is called Dímelo (Tell me): Stories of the Southwest , and brought to AZPM by lead producer Sophia Paliza-Carre. She brings us stories and voices from around town in a series of audio postcards.

This first one is from the Laos Bus Center. Reporting assistance from Mariana Dale.

The Roy Laos Transit Center is a bustling place in the middle of the weekday. This southside transportation hub helps move about 20 million people annually around Tucson, as evidenced by the buses that are constantly in motion. It’s certainly a place of transition.

Listen to their stories:

Learn More! Dímelo: Stories of the Southwest, a community storytelling project, wants to hear from you!

Learn About Changes to Tucson's Ronstadt Development Tucson Bus Fare Increase on City Council Agenda Tuesday Postal History in Tucson: Letter That Fell Into the Sea
By posting comments, you agree to our
AZPM encourages comments, but comments that contain profanity, unrelated information, threats, libel, defamatory statements, obscenities, pornography or that violate the law are not allowed. Comments that promote commercial products or services are not allowed. Comments in violation of this policy will be removed. Continued posting of comments that violate this policy will result in the commenter being banned from the site.