× LET'S ALL GO TO THE LOBBY, our new podcast filled with upbeat conversation and recommendations for great movies from across time and around the world.
/ Modified sep 15, 2021 11:26 a.m.

In June, Mexico introduced a campaign to vaccinate all adults in in cities along its northern border to help speed the lifting of pandemic travel restrictions by Kendal Blust, Fronteras Desk Tweet

Mexico says it is finished vaccinating adults 18 and older in cities along the border with the United States. Leaders hope that will lead to a full reopening of the U.S.-Mexico border. 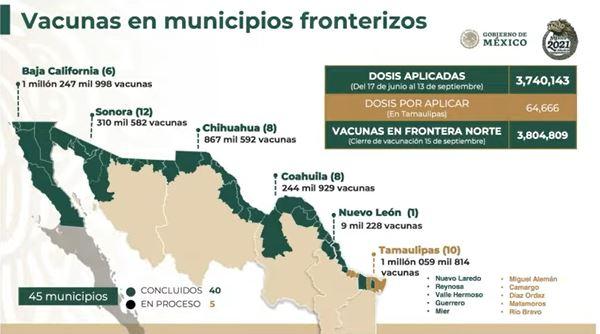 VIEW LARGER Mexican officials say as of Tuesday, Sept. 14, 2021, a campaign to vaccinate all adults in the country's northern border municipalities is complete.
Gobierno de Mexico

In June, Mexico introduced a campaign to vaccinate all adults in in cities along its northern border to help speed the lifting of pandemic travel restrictions that have disproportionately impacted Mexican citizens.

Now, officials say that effort is complete, with about 90% of adults in all 45 municipalities along its northern border fully vaccinated.

During his morning press conference Tuesday, President Andrés Manuel López Obrador said border travel restrictions, now in place for 18 months, can be lifted now that border vaccinations are complete. But it’s unclear if that will happen next week, when the current extension runs out.

The effort started in Baja California, before moving eastward along the border. Officials say a final round of second doses were administered in Tamaulipas on Tuesday, concluding the campaign with more than 3.8 million vaccine doses doled out in border communities.

Mexico businesses, residents breathe sigh of relief with impending end of crossing restrictions U.S. to reopen land borders in November for fully vaccinated Arizona reports 2,855 new COVID-19 cases, 27 new deaths
By posting comments, you agree to our
AZPM encourages comments, but comments that contain profanity, unrelated information, threats, libel, defamatory statements, obscenities, pornography or that violate the law are not allowed. Comments that promote commercial products or services are not allowed. Comments in violation of this policy will be removed. Continued posting of comments that violate this policy will result in the commenter being banned from the site.