Can the Rillito River wash the blues away? Kanne is a singer / songwriter who draws on desert landscape, family life for lyrical inspiration by Mark McLemore Tweet 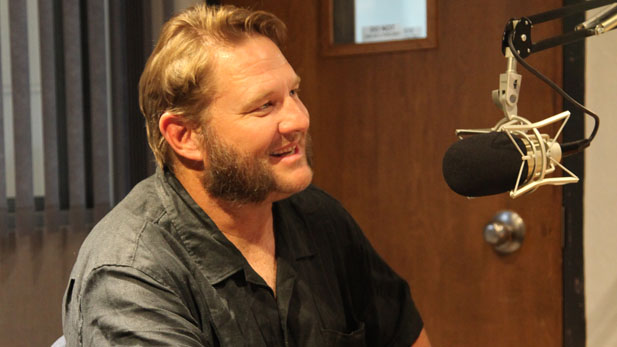 Singer, songwriter and guitarist Mike Kanne talks about his music in the AZPM radio studio

Mike Kanne is a Tucson resident, and a family man who makes his living working with his hands. Music is his creative passion, and although he doesn't play many live shows, or live a life on the road, Mike Kanne loves to write songs.

Kanne says that his guitar playing career began after years of playing and composing on piano and trumpet. A friend left a battered guitar behind after a jam session, and Kanne became hooked on playing it after only a few days. He says that the speed and relative ease of composing on a six-string gave him an exciting new perspective on songwriting.

You can find out more in this Stairwell Session interview with Mike Kanne...

4) The Way That Momma Cried

8) Waiting For The Rain

9) Hands Of A Working Man

Recorded, mixed, and mastered by Jim Blackwood with assistance from Jamison Waddell.